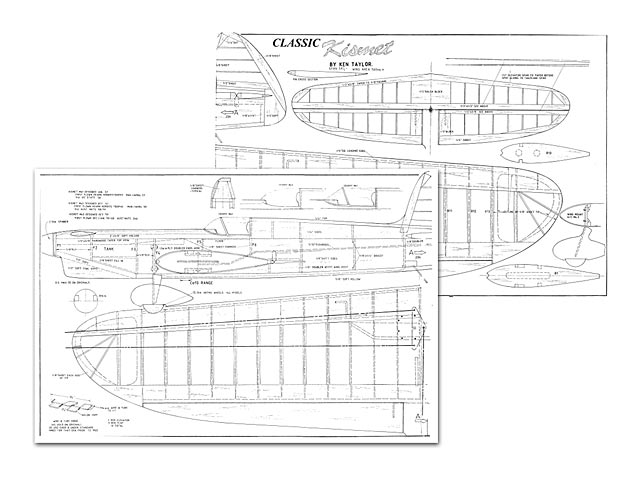 When Ken Taylor designed his Kismet in early 1957 he took the better points of the famous Nobler (oz6212) and Thunderbird (oz6238) planes into account. Like thousands of other stunt fliers around the world, he'd been successfully flying a Fox 35 powered Nobler and was thinking of moving on to the bigger Thunderbird which was winning in the USA and impressing everyone with its beautiful rounded lines.

But Taylor didn't want to run the low powered Fox on high nitro fuel to give it the extra oomph to fly the bigger Thunderbird, so, with the availability of the then new OS 35, he decided to combine the better points of the proven Nobler into an elliptical wing design of his own. The Kismet took to the air as a combination of Nobler fuselage members and Thunderbird-style wings.

It's a totally conventional plane which instantly proved capable of flying in top competition. The only modifications made to the design during the four years Taylor flew and developed it, was the use of slightly swept-back undercarriage legs for smoother landings, together with a more rounded cockpit, later in 1957 and wing mounted undercarriage, with a totally rounded cockpit in 1959.

Looking back on those four years, Taylor remembers the plane as only being flawed by the engine: The choice was between either a Fox 35 which is light and limited on power and the then new OS 35 Max 3. Like so many fliers I went for the howling Japanese engine because it gave me the ability to use a bigger plane. But the OS always had a preference to wind-out and forced us to fly that bit too fast. Only when the engine was new and tight did it hold a decent stunt-style setting.

When the Merco 35 engine became available in 1961 with its better control over power characteristics, Ken bought one and after trying it in a Kismet was so impressed that he decided to follow the international trend in stunt and go bigger. He decided the new Merco was good enough to fly the big Shark 45 which was already making a top impression in the US. His decision proved to be the right one, as the stunt specialist from Melbourne went on to win the Australian National Stunt Title.

Many years later, when Ken Taylor returned to stunt flying and was looking for a suitable plane for the classic class he quickly realised the relatively new Merco 40 was just the thing to resurrect a top plane from years ago - his Kismet.

Construction: Derek Pickard, who passed on the plan and historic notes, didn't include any construction details. No doubt he considered that any modeller building the 'Klassic Kismet' would not be a control line novice - and far be it for your editor to teach grandmothers... etc.

However there are a few pointers for those of you who haven't entered the realms of competition stunters and the 'Klassic Kismet' should make a good introduction to this form of flying. For those modellers believing that control line models are little short of 'bricks on strings', let me disabuse them. Lightness is just as important on this type of model as for any other aeroplane - they fly better that way.

You could 'cheat' and use sheet for the tailsurfaces, but it would have to be very low density, firm stock. I suppose you could also use a foam core wing, with built up tip, but again, watch the weight.

Note that there are two alternative undercarriage locations, modern trends favour the wing mounted position, but the fuselage mounting may be a little easier to install.

Fuselage: Check the bearer widths required for the engine, also the positioning of the silencer (not something that had to be considered in the 50s). The fuel tank is normally built into the fuselage, but if you want to experiment with different types, you should form a hatch on the starboard side. Construction follows the traditional aerobatic control line methods, where the fuselage is part build, including the engine and tank installations and the removable lower cowl, before the wing and tailsurfaces are installed. Some prefer to finish the flying surfaces to the stage of only requiring the final paint coats and fuel proofing before fitting to the fuselage.

Wings: A true wing is essential for good aerobatics and competitive flying, so jig building is recommended. If you are building over the plan, remember to shim up the spars to give an equal taper, top and bottom, when the wing is viewed from the front. Ribs are produced by the usual 'sandwich' method, I prefer to make the rear end slightly over size so that they can be trimmed to fit the trailing edge precisely. You will, of course, need lead-out holes and wing jig rod holes (if used).

Finishing: Perhaps this is where there is some conflict of utility and desirability. If weight saving is our prime consideration then a film covering, or tissue, dope and paint, might be the best solution. It has to be admitted though, that a control line model can be expected to do a lot of flying and therefore should be covered with more durable materials e.g. glasscloth and resin on the fuselage, fabric on the flying surfaces. Whichever system you choose make it pretty, but not at the expense of weight.

Flying: Expect to fly the model on about 65 ft. lines. For propeller selection (using a 46 engine) I would refer you to the article by Derek Pickard in the February issue of AMI. For more information on flying, I refer you to the handle and your skills." 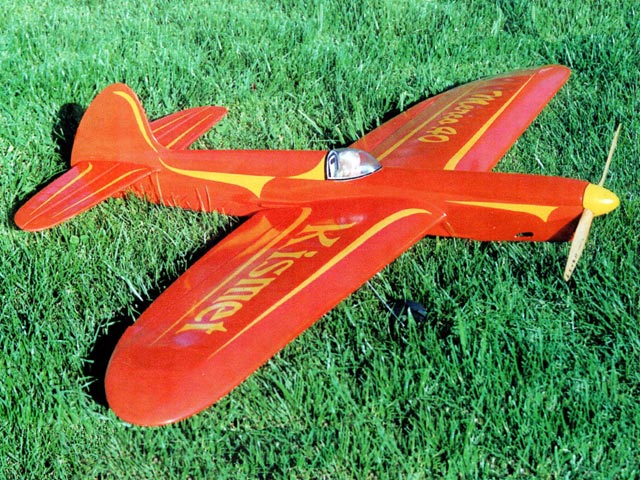