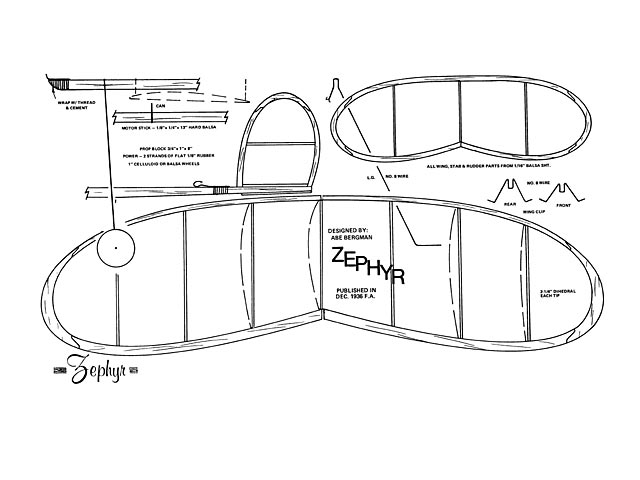 The Zephyr design was first published in Flying Aces, December 1936. This here is a later redrawn plan, in Model Builder 1979.

Have you ever noticed that R/C MB will publish a string of well-known or potentially competitive Old Timers, and then there'll be full-size plans for some obscure little ROG rubber job that no one has ever heard of before, sometimes by an equally obscure designer? There's a reason for that. Sometimes our draftsman, Al Patterson, has to spend more than the usual amount of time on a project (this month it was Col Thacker's Turner Special), and as a result doesn't have much time to spend on other projects. When that happens, there's usually a mad rush to find an OT model that's small, appealing, and won't take long to draw. More often than not, we find what we're looking for in an issue of Flying Aces, which probably published more of these little skeeters than all the other magazines combined.

That's what happened this month, and we came across the Zephyr in the December 1936 issue of FA. It was designed by a fellow by the name of Abe Bergman, and while he may not rank on a par with such greats as Carl Goldberg or Sal Taibi, ol' Abe sure knew how to design an attractive little model.

One of the problems with publishing a model like this is that you can't say for sure just how the thing is going to fly, unless you build one and find out. And since we had two weeks before the magazine was due at the printer, and since I was between projects and had nothing else to do, I decided to do just that. Besides, it's been a good six or seven years since I've built anything like this, and it would be a good change of pace from so many R/C projects.

I have to admit that I did change the construction, in the interest of having a stronger model. Take a look at the plan, especially at how the tips are spliced onto the wings and tail surfaces. Those joints and the tip grain direction are enough to make one's hair stand on end! Instead of this, I laminated the wing and tail surface outlines from 1/32 sheet, adding extra laminations at the wing TE to get the extra thickness. To keep the plans authentic, we have shown the original construction, but the laminated structure is strongly recommended.

Instead of carving a prop from a balsa block, I made a laminated slat prop using the technique described by Fred Hall in the March '79 issue of MB. As far as I'm concerned, it's the only way to go. As a side note, the slats were glued together with Titebond that had brown RIT dye mixed in with it, so that the separation lines between the slats would be more visible on the finished prop.

The model is equipped with one of the adjustable propeller bearings dreamed up by Paul rvicilrath, allowing precise side and downthrust adjust-ments. The flying surfaces are covered with orange superfine tissue, and a pair of 1-inch Hungerford spoke wheels add the appropriate Old-Timerish look.

The Zephyr is a very stable flier, due no doubt to all that dihedral. The longest test flights were with one loop of 3/32 contest rubber from Peck-Polymers. Average time was 40 to 50 seconds, with one flight of 1:04. I also tried adding a loop of 1/16 rubber to the 3/32, which resulted in a much faster climb but shorter flight time because of the much shorter motor run. Except for moving the wing forward slightly, no adjustments were necessary, and I was having a ball until the batteries in my home-made electric winder went dead. Rats! Something tells me that WCN was back of this, as I was flying in the morning, before showing up for work, and if the batteries hadn't quit I probably would have stayed out all day.

Building and flying the Zephyr has been a very enjoyable experience, and I'm sure that anyone who builds one will feel the same. Have fun!" 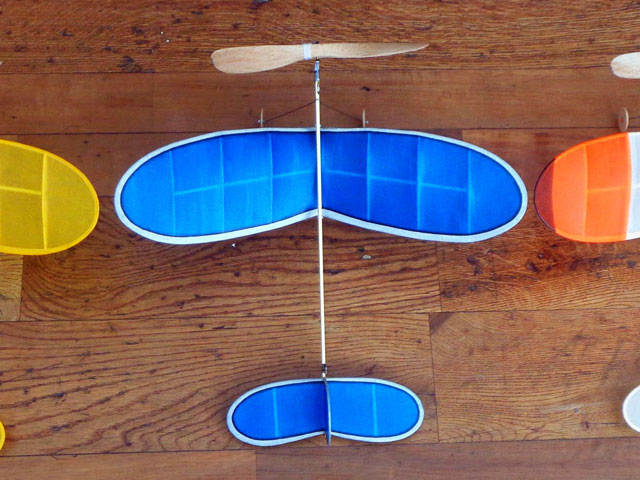 Yesterday, after a Thanksgiving dinner with friends, I flew my Abe Bergman Zephyr, built from OZ plans, for them in their front yard under the street lamp. A new rubber motor gave the little model improved performance enough to outfly the boundaries of their small yard, flirting with trees and power lines One of them asked if I wanted to sell it. He wanted it for his son, which would have meant instant destruction. These days it's unusual to even witness a tiny model of this sort, nothing remotely similar available in hobby shops. Takeoffs from the driveway kept altitude under control. Only changes I made from the original 1936 design were a double prop bearing so I could add some downthrust and wheels laminated from two layers of 1/32" balsa. I used a 6" balsa prop with one loop of 1/8" rubber. Hand wound, the flight was good for two circles to the right, then a straight glide to a smooth wheel landing. Altitude was enough to get into danger from telephone lines. Doculam covering I used was too much for the lightweight structure, and so I pre-shrunk the film on a frame and just ironed it to the edges without more effort to shrink it tight, probably no heavier than tissue without dope. Reason for the Doculam covering was so I could fly it at night under the street lamp without fear of dew collecting on the tissue, causing it to warp like a Pringles potato chip. Guess how I know. The model was built a couple of years ago when I realized there was little activity in the Duck Works (my basement) because it was too chilly in the Winter. Yes it DOES get cold in Alabama. And so the UPSTAIRS AIRCRAFT ASSEMBLY AREA was born, an unused bedroom with a banquet table building board, Zephyr being the first model built. Only problem I've had is running up and down the stairs to get tools needed above. It's always something...
DougSmith - 26/11/2016
My daughter also wished for such a butterfly. When I got the plan by Abe Bergman's Zephyr (oz5583), I built three of them [model photo & more pics 004-005]. I like the underpowered behavior of the fliers. The big 8 inch Balsaprop with only one loop 4mm rubber. The loop I have kept so short that after expiration of the force of the rubber does not sag too much and does not fall down in gliding. The Aurora Butterfly has already made a short thermal flight. Only with luck could he be spotted in the cornfield and salvaged.
AndreasKoch - 05/07/2019
First flights from Abe Bergman's Zephyr (oz5583) https://www.youtube.com/watch?v=MxavibLjEU8
AndreasKoch - 17/07/2019
A couple of pix this morning of my Zyphyr [006,007], still flying after all these years. Somehow the original pix got lost on their way to OZ, so here are some more. Doculam is the reason it has survived every tree in my yard without damage. If wound up enough, trees are a certainty, hand winds are pretty safe. It's a real good test bed for your own carved balsa props, a lost art but well worth re-learning, makes a big difference when you find a good one.
DougSmith - 08/08/2020
Hi, I finally managed to film Abe Bergmann's Zephyr (oz5583) in all three variations from take-off to landing on the same day: https://youtu.be/PEyDhHdlSos
Andreas - 31/08/2021
Add a comment