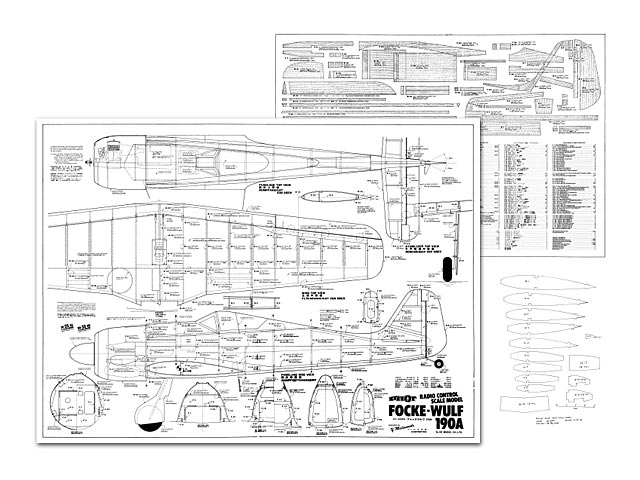 Quote: "Construction of the fuselage, wing and tail surfaces is easily accomplished. The fuselage framework can be accurately by insetting the longitudinal fuselage members and bulkheads into the notches in the plywood pieces. Use your favorite epoxy glue to adhere the members individually as you assemble the component parts. The wing and stab are similarly constructed using the plan as full size plan. Install the radio system as indicated on the full size fuselage drawings and the instructions provided with your radio.

(1). Construct the front fuselage frame. First, double the firewall with F-2 and F-3. Glue two F-1s into the slots in the firewall and bulkhead F-4 with epoxy. Glue F-5 onto the front of F4 s and then push and epoxy the engine mounts F-6 and F-7 into the holes in F-4, F-5 and firewall. Glue ply reinforcement F-8 to the top and bottom of engine mount. Glue two F-9s to the sides of front frame. Sandwich two bulkheads F-10 and F-11 between the F-9s.

(3) Cut the 1/8 x 1/4 in balsa stringers to the proper length and then put into the notches in each bulkheads and glue them.

PILOT'S FOCKE-WULF 190A is a welcome addition to their range of .19-.35 powered scale kits which includes the P-51D Mustang (oz4202), Zero (oz2908) and Spitfire (oz4800). The 190 however differs from previous kits in having fewer plywood parts, ply only being used for the fuselage formers and reinforcement of specific areas.

As with all the Pilot kits it is a deluxe package with superb die cutting of the balsa sheets and a number of moulded ABS parts for the cowling and forward fuselage decking. A crystal clear canopy/rear fairing, spindle shaped balsa strip and band-sawn parts, very accurately cut, complete the kit.

Plans are drawn on two sheets, one a very detailed general drawing with numerous sections and the second sheet has parts shown full-size, a three-view colour scheme, and written assembly instructions with stage by stage construction photos which are not very explicit, but when studied in conjunction with the detail drawings and 'dry runs' the assembly becomes clear.

Construction: Wing construction is conventional; 3/32 balsa ribs with two spruce spars, sheeted leading and trailing edges, cap strips over the exposed ribs and triangular section sheet balsa ailerons. The wing section is quite thick but does not incorporate washout. Wing span is 48-5/16 in.

Details are shown for both fixed torsion bar undercarriage and a retract system using 'MK' retracts, and all the necessary reinforcing and bearers for either type are supplied. It seems wrong to me to see a model of a WW2 fighter flying round with its undercarriage legs dangling, so I opted for the retracts, using the Radio Sailplanes mini type. These are in effect a copy of the original Goldberg type retracts with a nylon base moulding, a simple locking device and counter sprung legs, and fitted easily, although I adjusted the scale length of the legs and the wheel size to fit between the ribs. Not scale on the ground but the object was to get them out of the way in the air! It was necessary to build a servo box just forward of the main spar at the wing root to house the retract servo, a standard Futaba 16M which had enough power to operate the retracts satisfactorily. The well covers were cut from 30g aluminium sheet and attached to the legs using 12BA nuts and bolts and small brass brackets soldered to the legs.

The fuselage construction is straightforward, with ply formers on a ply and balsa crutch and 1/8 and 3/32 balsa planking. Tail surfaces are an open framework of large section strip balsa with elevators and rudder from balsa sheet. The forward fuselage deck is an ABS moulding and fits perfectly as does the canopy.

The cowling is assembled from four ABS mouldings and makes up into a strong unit secured by small self-tapping screws into hardwood blocks.

Quoted engine range is 19-25-35, so I fitted an OS 25 FSR which complete with standard silencer fits within the cowling, using the short length of rubber tube supplied to carry the exhaust clear of the cowling..." 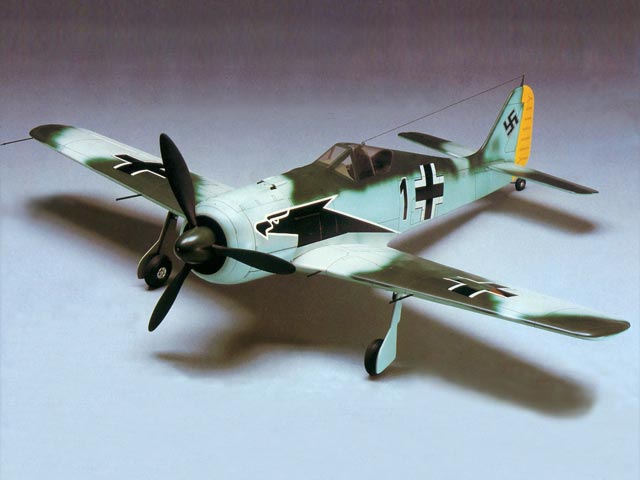