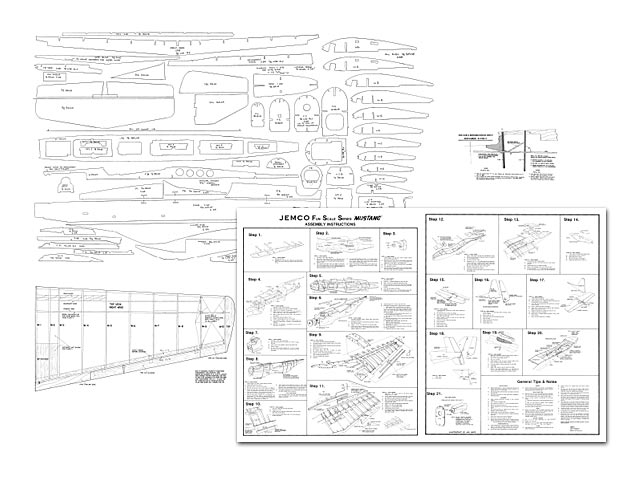 Quote: "Steve: These are the 'plans' for the Jemco Fun Scale Mustang 40. Span 51 inches. Engine 19-40. The kit does not contain plans in the conventional sense. Only a wing plan is included. The fuselage is built on the table following the illustrated instruction steps. Included are pencil tracings of the die cut parts. It is possible to scratch build the plane from what is included. Thanks for what you are doing with Outerzone."

What can you say about a kit that can be bought for $25.00, uses a unique approach to construction, exhibits great flying qualities and looks like an airplane! The Jemco 'Fun Scale' P-51 Mustang, to my way of thinking, fills a unique void for both the sport flyer and sport scale enthusiast by providing all of the above.

When Bob Hunt asked me to review this kit, his timing was perfect as I was mid-stream in a couple of new designs which were getting the best of me. I needed a diversion, something 'sporty scale' but not requiring a full blown finish, detailing, and all of the other ingredients common to Sport Scale.

I'm guessing, but I don't think this particular '51 kit (or its companion P-39) was ever a world beater sales wise. The kit has been out for quite some time but I don't recall ever seeing one at any of the fields I've visited or flown, which is a shame considering what it offers. Anyway, let's explore the kit:

The contents are well packaged and include much of the required hardware such as control horns, gear stops, blind nuts, and sheet metal screws. A large mylar sheet for markings, which I chose not to use, is also provided. Two sheets of building instructions, one of which is a full size wing layout, simplify the building. The unique fuselage (crutch type) construction is fully covered by a series of detailed isometric drawings.

Virtually all the balsa wood parts will re-quire some coaxing with an X-Acto; the die cutting is not that good. The light ply parts fall out of the sheet with only the spar notches needing a little clean-up. These die cutting problems may have been inherent to the production run from which my kit came and I haven't had occasion to discuss this with other modelers building the same kit but for what the kit costs, I can live with it.

Building the fuselage was genuinely fun and different. Bulkhead positioning on the crutch could be better shown with actual dimensions rather than approximating from the isometrics. Since the bulkheads have tabs which key to the fuselage sides you may not end up in perfect position, and will there-fore have to enlarge the slots. Not to worry, all will come out as advertised. The key step in building the fuselage is to align and secure the tail end of the fuselage halves prior to adding the aft section bulkheads. This is pointed out in the sequential build-up. I didn't pay attention and ended up with a twist that took some doing to eliminate. Elevator and rudder Ny-rods should be installed and anchored now. The upper sheeting must be soaked with water to enable it to match the bulkhead curve, but this is no problem if you don't force it. Let the water do its job - it's one of the few areas in R/C building where warpage is not only intentional, but desirable!

Wing construction is a snap and with two ,is lite ply spars, a ,/4 inch birch dowel leading edge, and a one piece machined gear block, I expect you could clear forests with this one. The only addition I would recommend would be to continue the lower sheeting all the way forward to the leading edge. It's very likely that, if you pick the airplane up at the field by grabbing it under the wing near the root, you'll have to patch the covering you've just punctured.

The tail group is solid sheet and needs only sanding prior to hinging the surfaces. The horizontal stabilizer in my kit was rock hard - so hard, in fact, that the edges were splintered. I thought about replacing the wood but figured since I was planning to use an Enya .40 for motivation, the additional weight in the tail would help the balance. It did.

At this point everything was given a final sanding, vacuumed, and a coat of Balsarite brushed on. My original intention was to do a military version, but since I had some extra iron-on covering, cream colored, I decided on a sporty, civilian version instead. It's not authentic but rather attractive and functional.

The radio installation was no real problem as the servo tray mount area is prepositioned as part of the design. I would have preferred to see it deeper in the fuselage as it can create a linkage interference problem with the aileron servo when the wing is at-tached. This is particularly true if you use pushrod connectors on the aileron servo arm. The use of regular devises created suffi-cient clearance.

Fuel is supplied by a Sullivan eight ounce square tank which fits like a glove. The Enya .40 was now re-installed and throttle linkage hooked up. Eyeball anything else you may want, check security of all hinges, and linkages and put the machine on charge.

The first time out for the Mustang took place on an absolutely magnificent day, one which makes abominable winters worthwhile. I had installed a new World Engines MK IX radio and went through the range check without a glitch. The old Enya was fired up, a full throttle and mid-range flight control check accomplished.

Taxiing, even over our cratered-by-the-winter field, presented no real problem; the bigger bumps created a tendency for the '51 to nose over, but the ample prop clearance prevented toothpick manufacture. Turning into the breeze, power was gradually applied and the tail came up almost immediately and rudder authority was right now! It took, typical of nearly any taildragger, a touch of right rudder to maintain initial heading. Climb out was brisk, but very true. Some down trim was required for straight and level hands-off. The airplane flies nicely through most maneuvers, needs considerable down input when inverted, and is extremely mild mannered at the stall. Pitch trim may be required at various power settings, especially if you're using a .40 sized engine. Landings are beautiful and so much fun, you'll probably get back into shooting touch and goes, and to see a '51 running fifty feet, tail high, on the main gear will get the blood pumping.

This Mustang is exactly what it's presented to be, 'Fun Scale', a nice, relax-ing, and realistic sport flyer, an ideal intro to sport scale." 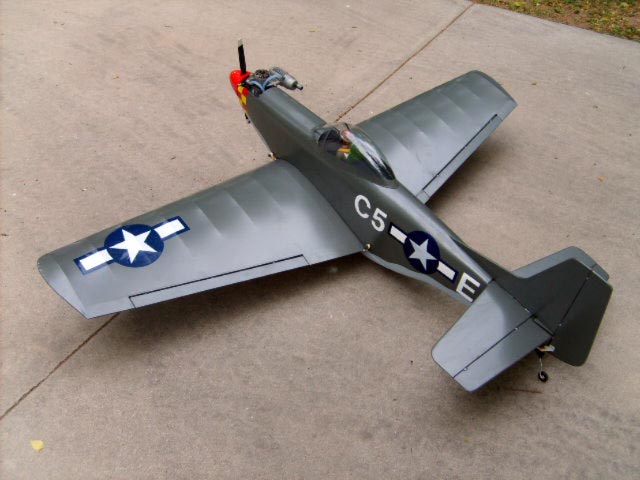 Photo of completed Mustang .40 model was found online at http://www.rcuniverse.com/forum/golden-age-vintage-antique-rc-196/10429021-jemco-fun-scale-series-mustang-40-a-2.html
SteveWMD - 22/05/2014
I'm in the process of building one of these from your plans. There is no left wing plan, the original was printed on the back side of the right wing view. You were supposed to turn the plan over and build the second half. I loaded the plan into GIMP, flipped it horizontally, then exported it as a PDF, matched perfectly. It was easier for me to build the wing with the entire plan. Here is the reversed left wing.
DougSmith - 20/08/2016
I flew my Jemco Mustang for the first time today, she fly good [more pics 004]. Thanks for saving the traced parts and the plans to keep this classic available for modelers the world over. Parts fit was not the best but the kit had this reputation also. Nobody can fault the flying ability, better than any other Mustang ever built. I did my best to keep mine light, ended up at 2lb 13oz ready to fly. Converted to electric with Leopard 3536 1100 kv (equiv to 2814) Castle 54 ESC and 3cell 2200 battery, 30 amps with APC 10x6E prop. I used this motor because it has a longer prop shaft to fit a spinner and a prop. Spinners are hard to find that run true, finally found one with aluminum backplate and plastic cone, not quite the right shape but acceptable. A beautiful Chinese carbon fiber spinner was not true, could not balance. Forget the all plastic spinners. The air intake under the spinner is enlarged a bit for cooling air, motor stays very cool, ESC gets a little warm but not hot, battery is cold. Doesn't have as much power as the original 40 glow but still plenty, about like a good 25. I moved the firewall forward to fit the motor, added a bottom battery hatch and enlarged the ailerons 1/2" wider. Balance point on mine is about 1/2" towards the rear from the recommended spot, test flight confirms this is OK. Bob Hoover's Ole Yeller is covered in Doculam painted with Rustoleum, lettering is low heat EconoKote to avoid blistering the paint. It's a real nice model, if you can get past the unusual construction, it's a winner.
DougSmith - 22/09/2016
Add a comment