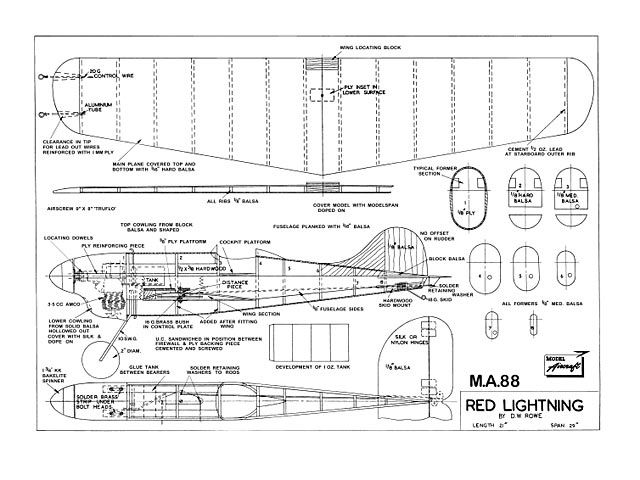 EARLY this year the designer became extremely interested in team racing. The SMAE having published their team racing rules, he set out to design a plane which would conform to their specification, and look like the real thing.

The ultimate result was Red Lightning, which has a consistent top speed of just on 80 mph; does forty-seven laps on 27 cc of fuel (present tank capacity) and has an all up weight, less fuel, of 18 oz. It has already won one team race event at the West Essex Gala, and came third in the All Herts Rally, owing to a slice of bad luck when a piece of solder from the tank stopped up the jet, when half way through the finals.

Construction. Fuselage. Cut the fuselage formers to shape. Use 1/8 in ply for No. 1 and hard sheet balsa for No. 2, the remainder from medium hard sheet. Notch formers 6, 7 and 8 to take the rudder. Use hard wood for the engine bearers. Cut out the 1/8 in sheet sides as masked on the plan from medium hard balsa. Make a template of the wing section at the root, so that the recess for the wing in fuselage sides will be exactly the same when cut out.

Bend and fit 10-gauge wire for undercarriage to No. 1 ply former. This is done by sandwiching the undercarriage wire to the former as shown in the plan. Next, fit engine bearrers to formers 1 and 2, use glue here. When they are dry fit engine and bolt it to the bearers..." 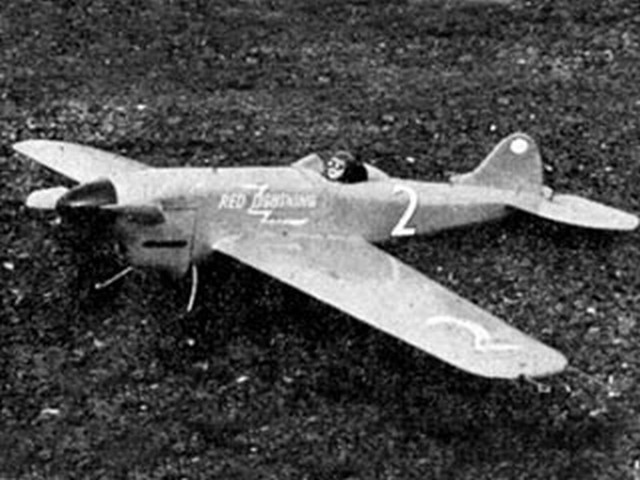