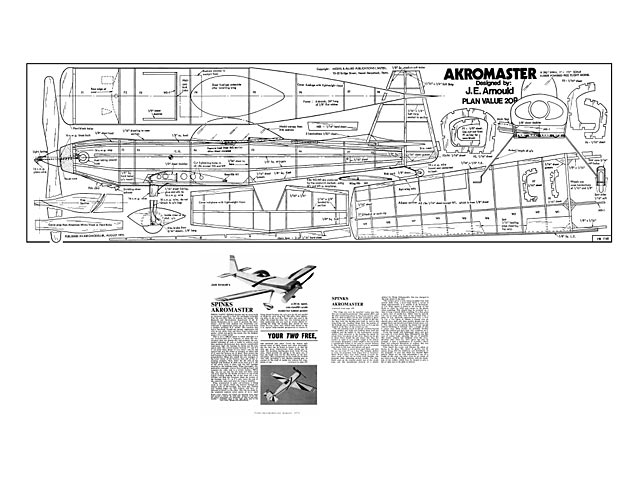 WHEN 'PAPPY' SPINKS decided that he could build an aerobatic aircraft to beat the seemingly invincible Yak 18s and Zlin 526s, no expense was spared. The Research and Development department of MH Spinks Enterprises set to work to produce the Akromaster - and the final product was remarkably conventional in appearance, being not far removed from a modern aerobatic R/C model! The machine also had a functional, though not spartan, appearance and with its red, white, blue and black livery looked quite pretty - which was partly the reason why the designer chose it for a scale model.

This is not a difficult plane to build, although it is not recommended for a beginner, as while the construction does not present any real problem, the successful trimming of such a model to achieve more than mediocre performance does require considerable experience.

Start the fuselage by laying out the 1/8 in square keel. The curved section between F-1 and F-3 is cut from three pieces of 1/8 sheet - one for the central keel and the others as stringers on either side of it, once the formers are in place. Now cement the half formers to the keel, making sure that they remain perpendicular. When dry, attach the 1/8 stringers to the lower corner of the formers, then add all the remaining stringers. Next, sheet the flat side of the fuselage with medium 1/16 sheet as far back as F-5. All of the above work is done with the half fuselage attached to the building board.

When thoroughly dry, preferably overnight, remove from building board and complete the other side in a similar manner. When this too has set, join the two sides and sheet, using soft 1/16 in sheet for the double curvature on top of the engine cowling. Soaking this in hot water for a few minutes will help the curvature. Sheet the bottom of the fuselage from F-1 to F-2 only, leave the rest of the underside open until after the wing is installed.

Wing construction is quite conventional, it being made in two halves, which are inserted through the sheeted sides of the fuselage. The main spar, leading and trailing edges are butt jointed, and then re-inforced as shown on the plans. The ribs are made by the sandwich method, seven pieces of 1/16 in sheet being placed between the root and tip rib and sanded to shape for each wing half. The plans show lighten-ing holes in the root rib - these were also used in the other ribs except the outer two. Use common-sense in their positioning and you can't go wrong.

Before installing the wing, the landing gear should be bent from 16 swg piano wire, bound with thread to the 1/4 in square cross-member pre-grooved to receive it, and cemented into place. Cover the thread with several coats of balsa cement and when thoroughly dry the wire can be flexed to loosen it, so that the wire can pivot. Alternatively, brass tubing can be used. The auxiliary landing gear struts from 18 swg wire, which provide the spring to the gear are, in fact, the brake lines for the disc brakes on the full-size plane. This arrangement on the model has worked very well, providing a very flexible landing gear as needed on this kind of model but without any slop-piness or sag..." 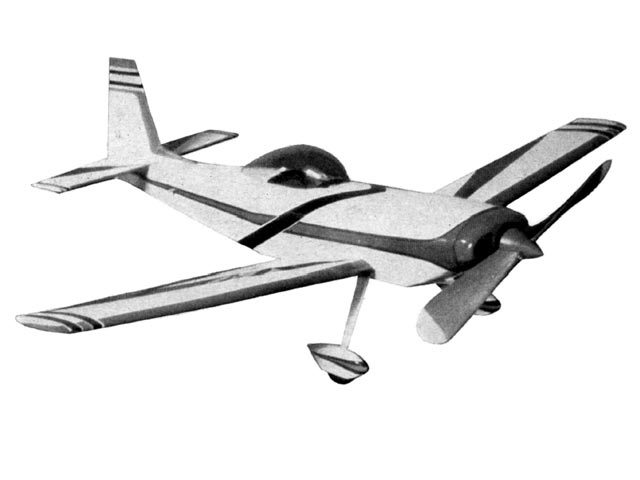