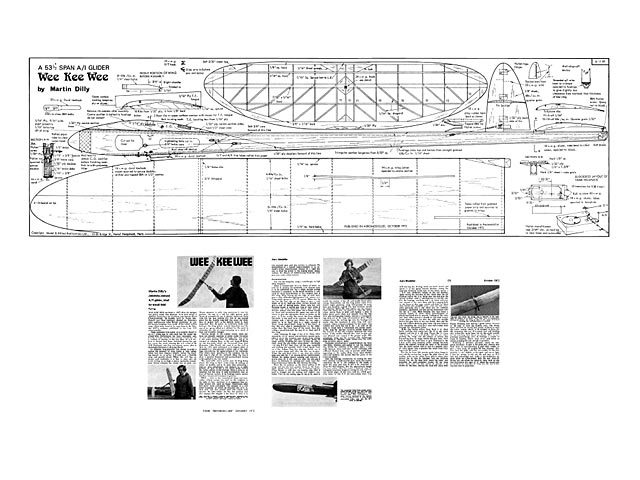 WEE KEE WEE was built in 1967, after the designer had proxy flown New Zealand A/2s with wings of Jcdelsky structure at the Kauhava and Sazena World Championships. The models, built by Angus MacDonald and Noel Hewitson showed an impressive glide performance under British conditions, so careful female templates were made of the actual airfoils used, which were found to be very close to the Benedek 6407-e ordinates published in the June 1959 Aeromodeller.

These ordinates were scaled to a suitable chord for an A/1 glider and the end result was the model described here. Performance has been reasonably satisfactory in both calmish and turbulent conditions, and a number of placings in the top three of A/1 contests in Britain have been obtained during the past few years, the model winning the A/1 event at the 1971 Nationals with five two -minute maxes plus an admittedly fortuitous 8.14 in the fly-off.

An elliptical wing planform was chosen an order to reduce the tendency of wing flutter at high speeds, which had been observed (briefly, before the resulting impact) on an earlier A/2 with such a Jedelsky wing and parallel chord. While this A/1 has not shown such tendencies it is best to play safe and avoid towing at too high a speed, especially immediately before releasing the model into its glide turn.

Wood selection in solid wing structures is very important, the use of a stiff but light quarter grain wood of around 6 lb/cu ft density maximum being vital for the rear portion. Try also to use quarter grain for the leading edge half but since the thickness is greater here, a low density wood is more important than the grain. An accurately made joint between the wing pieces is most important and the use of an epoxy adhesive is advised for this joint to minimise the risk of warps occurring as a result of heat and humidity changes.

Various details on the original model, while perhaps not thought essential, do either make life easier or else offer some slight advantage that may mean a few extra seconds and are, therefore, not to be sneezed at. Among these are the anti drop-off fitting on the tow-hook. which was 'borrowed' from New Zealander John Ensoll, who used it on his A/2 at Save in 1971, and consists of a U-shaped pliece of stranded C/L wire epoxied to either side of the fuselage, just clearing the upper surface of the tow-hook. This offers some resistance to the tendency for the tow ring to slip off the tow-hook when the line is slack, a positive downward and rearward pull having to be applied to the line instead.

While a more or less conventional timer and auto-rudder release system was used on the original, in the light of later experience it is suggested that another system (yet again an Angus MacDonald idea) will prove more convenient. This consists of a new timer faceplate, on which are mounted the D/T release arm and also another wire arm which both tensions the auto-rudder into the tow position and also engages the waggler in the timer to hold it in the stopped state until the towline is released. The employment of a thickish (approximately 3/64 in diameter) nylon monofilament, instead of a rigid wire pin, to hold the system in the towing mode, greatly reduces the chances of embarrassing hook-ups when pins jam under release tension.

Select a matched pair of 1/4 in sheets of balsa, not over 10 lb density and preferably 8 lb. Quarter-grain is to be preferred here, but a slight straight-grained tendency is acceptable as the wood thickness is sufficient to resist most twisting in the forward part of the wing. After trueing up one edge of each sheet, glue a strip of hard straight-grained 1/4 in square to it, using either epoxy or a PVA cement. When this has set, cut the rear edge of the sheet to give a total width of 2-1/4 in. Sand the lower surface smooth and give a coat of sanding sealer. Make sure that your building board is smooth and free of hard blobs of cement and other blemishes which will mar the finished surface while the upper one is being worked on. Sand and razor-plane the upper rear part of the sheets to give the appropriate bevel as shown on the plan; to avoid scoring the wood, the lines defining the limits of the wood to be removed should best be marked with a fibre-tip pen..." 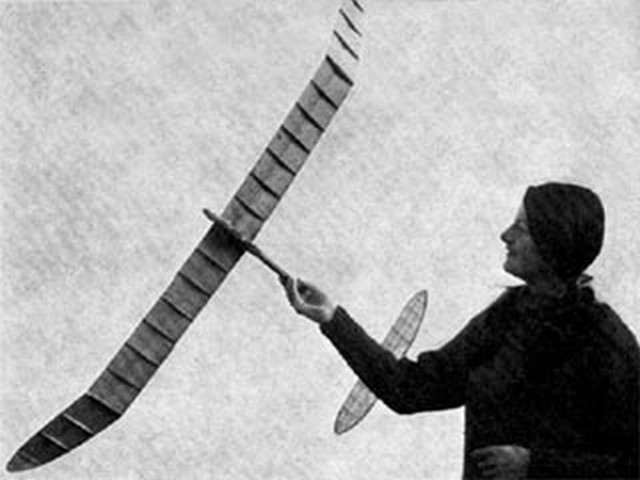