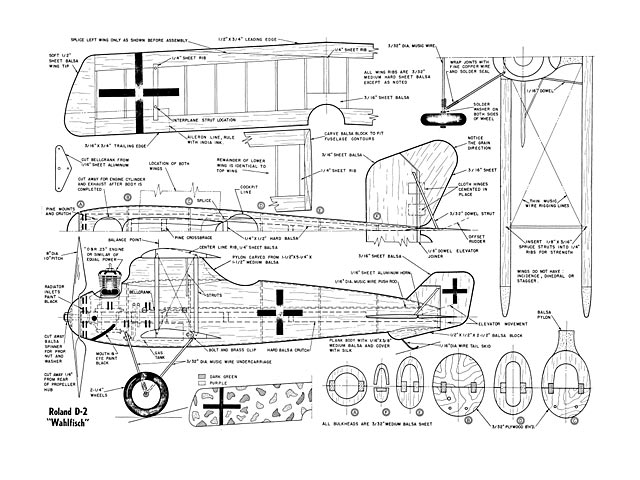 THE 'Black Knight of Germany', Hauptman man Ritter E von Schleich, leader of the 'Bavarian Blue Tails', attained many of his thirty-five victories using the Roland D-2. Because of its streamlined shape, this plane was nicknamed 'The Whale' (Wahlfisch), and many pilots painted a mouth and eyes on the nose to simulate a whale. Although used in action with success for quite some time, the Whale somehow never achieved the popularity of the Fokker and Albatros fighters. Unlike the average bullet-nosed planes with liquid-cooled engines, the D-2 did not have a radiator protruding into the airstream. Instead the radiator was cleverly concealed in the nose just behind the spinner, with inlet and outlet slots as the plans indicate.

Of all the biplanes used in World War I the Roland D-2 is one of the best adapted to control-line use because of its exceptional streamlining and sturdy construction. The latter is due to the fact that the usual cabane struts are replaced by a husky streamlined pylon - which, incidentally, hindered the pilot's forward vision. No dihedral was used, which makes the wings very easy to build, even with the slight amount of sweepback. The model is easy to fly and should bring back to mind the 1917-18 period when flying machines were assemblies of wood, wire and fabric.

The fuselage is built up and planked for three reasons: lightness, economy and rapid construction. This type has all these advantages over the hollowed balsa block fuselage. A crutch made from 1/4 x 1/2 in serves as a jig, engine mount and backbone. This is built first and the bellcrank attached securely. Cut out the tail surfaces and trim and sandpaper to shape. Add the fabric hinges and cement the stabilizer to the crutch. Cut out the bulkheads and cement them in place on the crutch. Attach the gas tank and bolt the landing gear in place to the plywood bulkhead. Hook up the control push rod and then cover the whole body with 1/16 thick balsa. Strips of about 3/8 in wide are good for this purpose. Make sure the strips are cemented to each other as well as to the bulkheads. Sandpaper the body until smooth and then cover it with very fine silk. This makes it almost indestructible. Dope it twice and sandpaper smooth. Cut the plyon and cement it in place. Fillet pylon with Aero Gloss plastic balsa. Cut out the cockpit and engine recess, and add vertical tail and strut.

When you make the top wing, extend the right wing leading edge straight through past the center line, as the plans show. This will make a very strong wing. The bottom wing is made in two pieces. Only the root is shown in the plan because the rest is the same as the top wing. A small balsa block is used to fair the wing into the fuselage. Both wings are covered with fine silk. Dope well.

The top wing is cemented in place first. Plenty of cement must be used when doing this. When this is thoroughly dry, the wing struts can be cemented in place. These should be sharpened and pushed into the wing ribs as shown on the plans. Lay the plane on its back and cement the bottom wing panels in place, inserting the struts in the ribs. Carve the spinner from soft balsa and cement to the propeller, cutting away for the propeller nut and washer.

Once the model has been clear doped three or four times, it is ready to paint. Using Aero Gloss dope the entire model was painted pale yellow three times. The mouth and eyes are black. The upper surface of the top wing is covered with splotches of green and purple. The horizontal tail surfaces and top side of the body are colored in the same manner. All struts are either dark green or purple, and all crosses are black. Of course you can paint the plane any color you wish but be sure to use a paint that is impervious to hot glow plug fuels. It is a good idea to use fuel-proof cement as well. Fine music wire is used for the rigging. This is not necessary but adds quite a bit to the appearance of the model. Machine guns can be made from a hair curler.

The model flies at about 65 mph. I used 50-foot lines for flying, the size of which should be at least .010 in dia. A line guide made of wire or plywood should be cemented to the inboard wing strut. Balance the model 1/4 in forward of the pivot point. Do not fly if the model is tail-heavy or a crack-up will occur. Add lead weight in the tail or nose to balance the model. Be sure to offset the rudder to turn the model away, from the center of the circle. This will keep the lines taut."

Note: DA Newell was a pseudonym used by Walt Musciano. 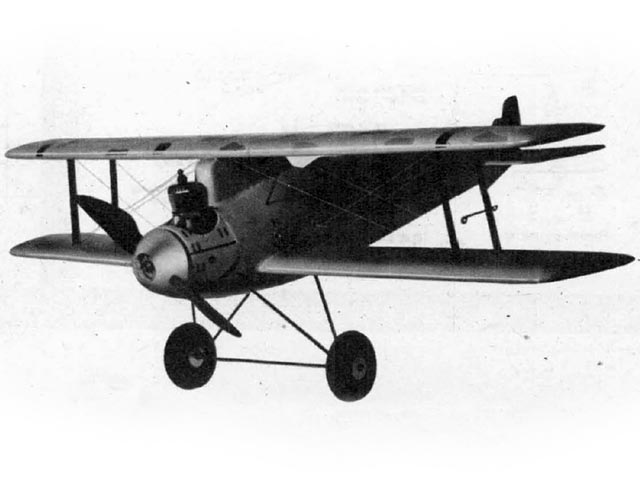 The nickname should be Walfisch, meaning Whale, Whalfisch doesn't exist and Wahlfisch may mean "fish voting" which is a new concept to me 8-) Also this nickname is mis-attributed here, Walfisch was the nickname for the LFG Roland C,II, the two-seat cousin of this and a much better plane than this tadpole shape with no vertical tail to speak of.
Miguel - 30/07/2020
Fair point. Thanks. Have changed the title of this one now to Roland D-2. I'm inclined to leave the body text of the article unchanged.
SteveWMD - 30/07/2020
More than fair. Seventy years ago the designer was unaware of that bit of information which anyway did not diminish the subject anyway, nor made the model fly any worse.
Curiosity killed the cat so I did download the plan and article and was amused to see the spelling in both was that lovely Wahlfisch, The Electoral Fish !!
Miguel - 30/07/2020
According to Wikipedia, the LFG Roland D.II was "nicknamed Haifisch (shark) for its sleek appearance". But what's in a name? That which we call a Wahlfisch by any other name would fly as sweet. (Apologies to W.S.)
Jan Novick - 01/08/2020
This 'thread' sure is getting fischy! I can agree with your "fly as sweet" hypothesis in a CL context only, in FF or RC it might fly best as a canard. Look at its more successful cousin the C.II (the Walfisch legitimate), a second version had to come out early with much enlarged backflappers! You see, a large posterior will help you keep to the straight and narrow.
Miguel - 02/08/2020
If I may add my two-pence worth, I think one should enjoy this plan for what it is – a nice piece of aeromodelling memorabilia. According to the Wikipedia entry ‘Nicknamed Haifisch (shark) for its sleek appearance, the D.II and D.IIa proved generally unpopular in service due to poor fields of view and heavy controls. It was quite fast and strong but had mediocre manoeuvrability and handling’. So I tend to agree with Miguel. Those tail surfaces do not bode well for any RC model, let alone a FF one. In CL it is a different ballgame – I once lost the rotor of a CL autogyro inflight and it simply kept on flying! ‘Rock at the tip of a string’-like. As long as the CG is right, you have speed and the lines are taut (almost) anything can fly in CL… Just do not expect it to aerobat like a Nobler…
Arn - 02/08/2020
Add a comment