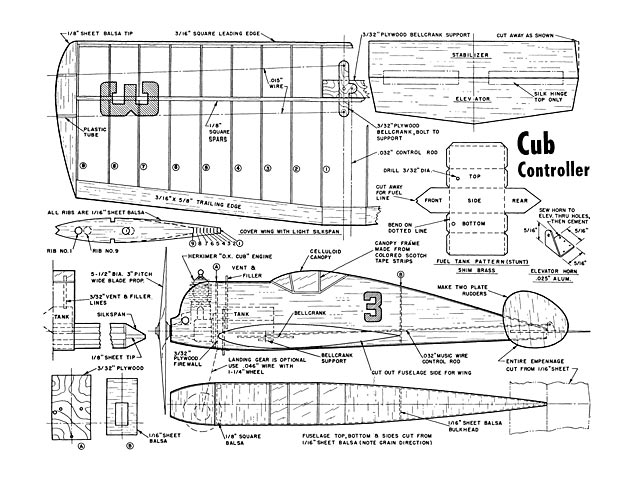 Quote: "This tiny stunt plane will thrill the expert, yet it's very easy to build. Cub Controller, by Walt Musciano.

As easy as ABC aptly describes the construction and operation of this tiny stunt plane. Designed around the new easy-starting OK Cub glow plug engine, this model is perfect for the tyro's first attempt at control-line stunt. Yet it will please the experienced modeler by its performance. With only 90 square inches of wing area the model can be flown in most any open space. It should not take more than twcY evenings to construct this model.

Select medium hard balsa for the fuselage sides and cut these to shape including the wing and stabilizer slots. Cut out bulkhead B. Cement the rear of fuselage together and insert bulkhead B. Hold together with straight pins while cement dries. Plywood firewall A is cut to shape and holes drilled for engine mounting and fuel line. This should be cemented well to the fuselage. Use 1/4 in square balsa strips to reinforce this joint. The entire bottom can now be covered from the firewall rearward. The grain should run spanwise. Cement can be applied through the open fuselage top to insure an adequate bond.

Cut the tail surfaces from hard 1/16 balsa sheet and sand smooth. When cutting the stabilizer note that one end is cut at an angle so the plate rudder will be offset when it is cemented in place. This main-tains tension on the flying lines. The control horn can be cut from dural or metal from a tin can and is sewed and cemented in place on the elevator. Hinge the elevator and stabilizer with pieces of fine cloth such as silk. These hinges are cemented to the upper surface only, but make certain that the elevator moves freely in both up and down positions. Slide the stabilizer into the fuselage slot and cement well.

The wing is made in one section with no dihedral. This, plus the fact that the fuselage slot automatically sets the correct incidence angle (which is zero), adds to the already simple construction. Although the wing is tapered the ribs are easy to cut and assemble. Medium 1/16 balsa is used for the ribs. These are sanded on both sides to about 1/20 in thickness. All ribs are identical from the spars forward and the after portions do not vary a great deal from one another. The root and tip ribs are shown and lengths indicated for those between. Very hard balsa should be used for the spars and leading edge. The trailing edge is of medium soft balsa. Mark off the rib locations on the spars and leading and trailing edges. Pin down the lower spar and cement the ribs in place using pins to hold them upright. Cement the upper spar followed by the leading and trailing edges.

Cut the plywood bellcrank and bellcrank support. The support is securely cemented to the root ribs after the 3/32 hole is drilled. The holes in the ribs are easily made with a leather hole punch or ticket punch. If neither is available holes can be burned through with a hot three-inch nail. Notice that the leadout wires are staggered rearward. This helps to keep the lines taut when flying at high angles. Install the leadout wires and bellcrank at this time. Add the 1/4 in sheet wing tips and when dry, sand the entire structure with fine sandpaper and cover with light weight Silkspan. Water and dope.

Now slide the wing through the fuselage and cement liberally from in-side as well as outside. When this is dry, cut away the Silkspan in way of bellcrank and install the control rod.

It is advisable to install the engine at this time. Use small bolts (steel preferred) and when in place apply several coats of cement over the nuts which should be on aft side of the firewall.

The fuel tank pattern is shown on the plan. This type of tank is required only if stunts are contemplated and is made from very thin shim brass about the thickness of bond paper. All joints should be well soldered and tested for leaks before the tank is installed. The tank lays on the wing leading edge and fits between the upper spar and fire-wall. Cut away wing covering to install tank. A 1/8 square balsa strip laid across the top of the tank and cemented to the fuselage sides will hold the tank in place. The fuel supply line pierces the firewall. In the event that no stunts are contemplated other than loops, a very small can will serve as a good gas tank.

Cover the fuselage top from the firewall rearward, and when dry, cover the bottom forward of the firewall pulling the sides together as the plan view indicates. Sand the entire model smooth after the engine has been covered with a cloth. The celluloid canopy is added now. This is made in three pieces. The top is cemented in place after the two sides have been attached.

The prototype model was hand-launched and landed on its belly. If you desire a landing gear, cement it to the fuselage bottom now. Use light-weight wheels.

Apply a coat of clear dope to the en-tire model and one more to the wing. Sand lightly and apply one coat of thin colored dope for looks. Add decals.

The model was flown on fifteen-foot lines indoors and then on thirty-five-foot lines outdoors and in both tests the model handled well. Use .008 dia flying lines any length you desire up to thirty-five feet. Of course the longer lines are better for stunting. Before flying be sure that the model balances at the point where the forward flying line leaves the wing. Addition of lead weight in the nose or tail will remedy any unbalanced condition. The elimination of landing gear obviously improves performance. It will be found that the model leaps out of the launcher's hands. It is suggested that for the first few flights the model be assisted with a bit of a push until the 'art' of launching is understood." 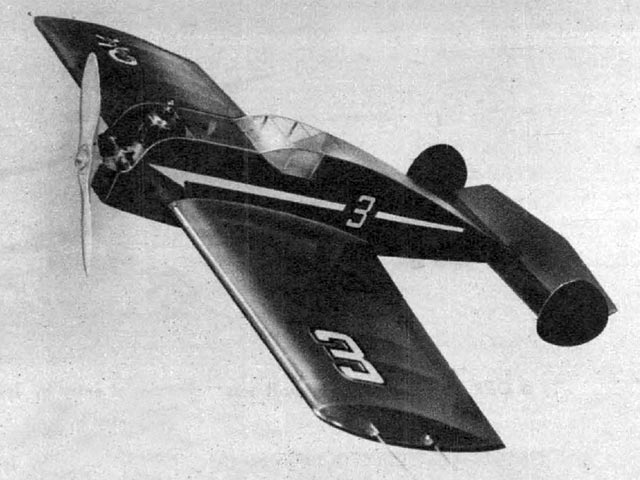