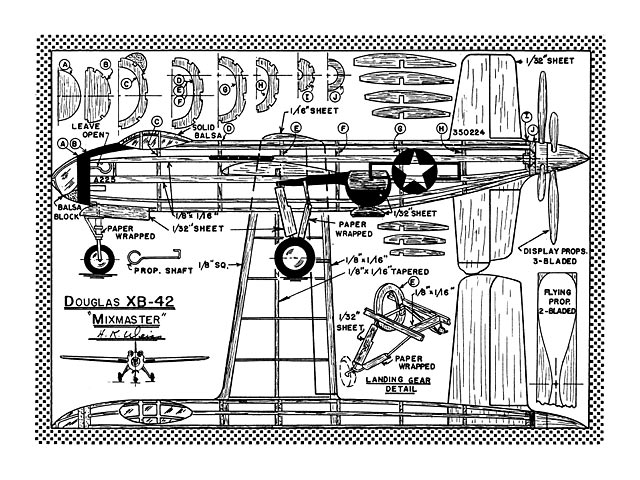 Try out the tail propeller principle yourself with this fine model. Here's a ship that caught our eye as a likely subject for a flying model the moment we saw the first pictures of it - the Douglas XB-42 high speed bomber, popularly known as the Mixmaster. Unusual in layout, its proportions are nevertheless as favorable for good flying qualities in our model as they were in the original. One of the fastest of propellered planes, it crossed the continent in a little over five hours.

The KB-42 weighs 36,000 pounds and is powered by two Allison V-1710 liquid cooled engines, both mounted inside the fuselage and driving counter-rotating coaxial propellers located at the tail. But although a pusher, the Mixmaster is not a 'canard' or tail-first type, since its wing is mounted about at the midpoint of the fuselage and its tail carries conventional control surfaces - conventional, that is, except that the vertical surface extends below as well as above the fuselage.

Sharp-eyed airplane recognition fans will have noted in photographs released on the Mixmaster that at least two models exist, and there are two major differences apparent in them. The size and shape of the vertical fin differs in the two models; and in one model the pilot and co-pilot sit side by side under a fuselage-wide canopy, while in the other each man has his own cockpit and streamlined hood. For our model we chose the less conventional type of 'bug-eye' dual cockpits.

WINGS AND TAIL: First part of the model to build is the wing. Cut the ribs from 1/32 sheet. We have found it helpful to make the ribs a little oversize, and then sand off the excess after the wing frame has been assembled. The whole wing is made in one piece. Pin a piece of waxed paper over the plan, then pin the leading edge, trailing edge, and main spar in place. Leading and trailing edges need not be shaped at this time, but the main spar should be tapered to fit the notches in the ribs. Fasten the ribs in place, using plenty of cement. Add the wing tips, cut from 1/16 sheet, When the cement is thoroughly dry, unpin the wing frame and. treating it as a unit, go over it with sandpaper rounding off the leading edge, bringing the trailing edge to a point, and generally removing irregularities so that a good covering job will be easy.

Crack the spars at the midpoint of the wing and re-cement them so the wing has about 3/8 in dihedral at each tip. Cut out the tail surfaces from 1/32 sheet balsa and sand them smooth. The stabilizer is made in one piece..."

Note I have shuffled this listing around a little. The previous scan version has now been moved to become a supplement titled 'alternate' and the main plan file here now is the page scan from the original magazine page, as printed in 1946. 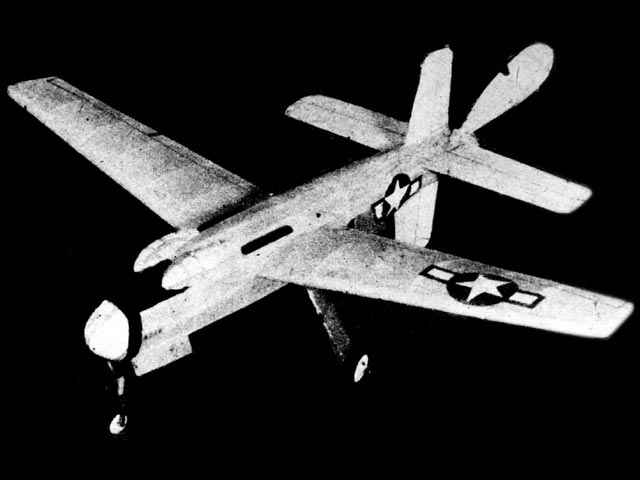