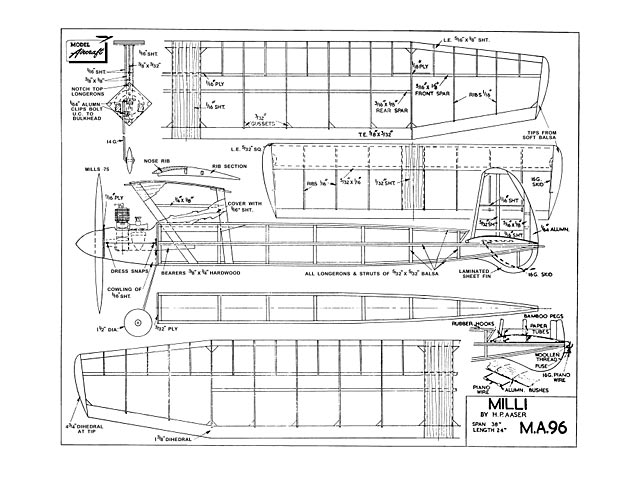 Quote: "The prototype was designed primarily as an experiment. The purpose was to investigate how a small and light model powered with an engine of 1 cc or less would fare in competition with larger and higher powered models. Experience with the Milli has shown that whilst the small model is far better in some respects, it also has its disadvantages. The small model is, of course, easier to store, transport, process and handle on field. It may be built with lighter wing loading than the average higher powered model. Climb is good, but probably slower than that of the higher powered model. Glide is fairly good, but not the sailplane glide that may be obtained with larger models. The small size is a definite disadvantage when model is about to fly OOS. Also the comparatively fragile construction means that you have to act with some care when starting the engine, and retrievers with too many thumbs have no difficulties in puncturing single layers of Japanese tissue.

The Milli has proved to be a consistent flier and easy to trim. In the 1950 Norwegian Nationals it took first place in class D.1 - power duration models 0-3cm2 - with aggregate time of 599.3 seconds. The first flight was OOS and the shortest flight of the three was 169 seconds.

Construction: The writer prefers to start with the tailplane. Make a rib template and cut out eight ribs of 1/16 medium sheet for the elevator. Sand the trailing edge to triangular cross-section, make notches for the ribs, and pin trailing and leading edges to the plan. Cement ribs and tips in place. Cement the 1/32 soft sheet to the leading edge and leave until the joint is thoroughly dry. Now cement the sheet to the ribs. The elevator is then removed from the plain and spar and top covering of centre section added..." 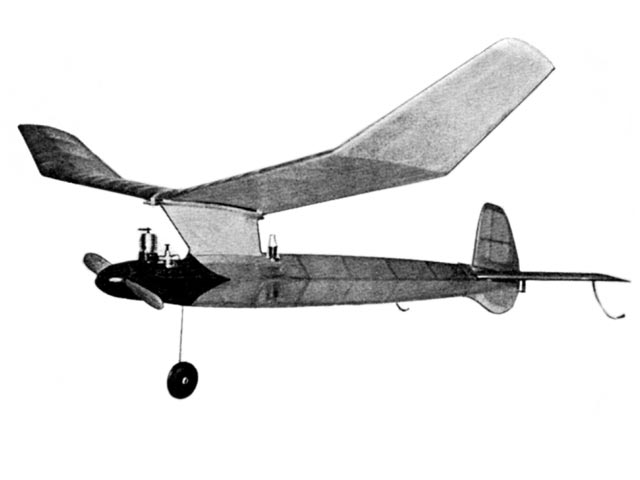