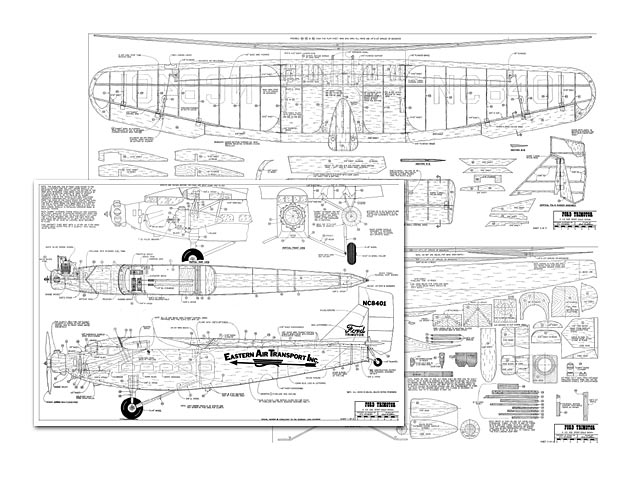 Quote: "Come with us to the days of yesteryear when a great silver bird plied the airways ..join us now as with a hearty roar of its engines the Ford Trimotor flies again!

Eastern Airlines had offered (for the best score achieved by a replica Eastern Flagship), round trip tickets for two to fly free anywhere on their system, USA or the Caribbean - whatta prize to win! So starting from scratch gave a fine perspective - ideally I should build a 4-stroke powered vintage or jet model of an aircraft that had flown in the Eastern Airlines fleet. Since 4-strokes haven't yet worked well in jets, the focus was further narrowed to the Pitcairn Mailwing flown from 1928 to 1935 (a biplane), the Ford Trimotor flown 1930 to 1932 (three engines - ugh!), the Curtiss Condor flown from 1930 to 1934 (biplane with two engines - ugh, ugh! ), and the Douglas DC-3 (would need special made retracts - awful). Others like the Lockheed Electras, DC-7, and the Lockheed Constellation were ruled out as being too complicated for me.

It looked like the three engines was the way to go. I could run a 4-stroke for primary power up front and two Cox .049s in the outboard nacelles would add extra noise. The Ford Tri motor was the choice - it would qualify for five possible awards and, best of all, if the Ford Trimotor was finished in the trade dress of Eastern Airlines, I'd have a chance for the two round trip Eastern tickets.

To quickly sum up the outcome of this reasoning, on Sunday December 29, 1985 at the 18th Annual Tangerine contest in Orlando, Florida, I won 2nd place (only 3 points out of first) in Sport Scale with a 1/12 scale Ford Trimotor in Eastern trade dress. It was scratch-built in ten weeks time and powered by a single Enya .40 4-stroke.

Additionally, I was presented an Eastern Airlines envelope with a letter inside that said: Congratulations! You have won a round trip ticket for two anywhere on. Eastern Airlines system in the US and the Caribbean. We are pleased to have you as our guest, and look forward with pleasure to serving you. Sincerely, Alexander M. HOUSton, Manager Passenger Sales. Orlando.

In 1986 1 celebrated 50 years of model building - what a wonderful golden age prize to enjoy with my wife - through modeling.

And now I can also enjoy Sunday sport flying with the Trimotor which flies just great and is lots of fun - it was continually simplified in my mind before each building session (you might enjoy reading 'Simplicate and Add Lightness' in the February '86 issue of RCM). The model took about 125 concentrated hours of work from the first start at plans drawing to the first flight.

Since this article makes the plans available to you, I suspect you could build the model in 2/3 the time mine required to finish, since a lot of time was spent in the planning and structural design to make sure the Ford came out under 6-1/2 pounds (it weighs 6-1/4 pounds ready to fly) so that the wing loading and power loading would be in the most satisfactory range.

You may find the following bits of background of interest. The model is scaled up from a 3-view that was in a portfolio of drawings of aircraft that Eastern had flown. The portfolio was reportedly given as a commemorative gift to some first class passengers in the mid-1970s. The drawings are collector's items now - some are found in Eastern's offices, in Orlando.

New Signs and Graphics, Inc. in Orlando allowed me to use their overhead projector system for plans enlargement. They also provided me with tips on the application of graphics - like mix a few drops of dishwashing detergent in warm water and wet the MonoKote with the mix before putting on the graphics - that allows sliding your 'cut outs' into perfect position. Great technique that worked perfectly.

There are lots of .40-.49 4-stroke engines around and any have more than adequate power for this model. A 12 x 5 prop cut back to 11 in diameter proved proper pitch-to-flying speed on my model. I ended up using my Enya .40 4-stroke..." 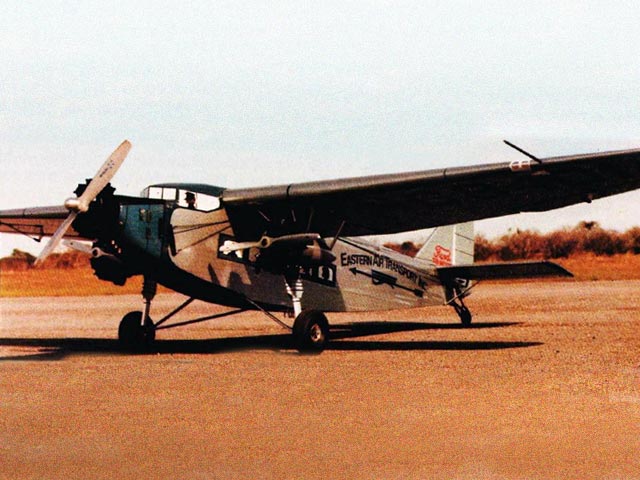 Back in 1996 I built a Ford Trimotor from this plan, in Scadta's Livery (later Avianca) [more pics 003-006]. Trimotors linked Colombian Andean cities at a time when roads were rough. This particular model was second in stand-off scale local contest by that time. I enjoyed a lot building and flying it.
EnriqueAlvarado - 28/11/2016
Reading Stu Richmond's comments reminds me of when, in the 'happy' days when we had a timeshare, I persuaded my wife that a trip to the U.S.A. would be nice and especially Wisconsin. Driving into Oskosh (where?) midweek, I dropped off wife and daughters at the shopping mall and made my way to the EAA Museum. Chatting to a guide, on the way to the 'Vintage Hangar', he commented that I should have come at the weekend when 'Vintage Flights' were available. Being a born pessimist I asked, expecting nothing special, what the Vintage Flight might have been and came very close to banging my head on the wall when he casually said that trips in a FORD TRIMOTOR were available!
AlanV - 11/09/2018
Alan V. sorry you missed the ride in the tri-motor. My son and I have been to Oshkosh three or four times, the last being in 2004 and we took a flight on the tri-motor at that time. Check out the EAA web site for the tri-motor tour listing. Looks like it will include the states of OH, IN, KY, IL, AR, TX, OK and NM from mid Sept to mid November. Well worth the $s for the trip and the fare.
LeeRandall - 11/09/2018
The Ford Tri-Motor has been for me a "one fina day" project. I have the model plans designed by Bob Peru and Cal Smith and published in American Aircraft Modeler in 1964 just before Cal Smith's untimely death. One issue that has kept me away from making this model is the corrugated skin. Has anybody out there devised a simple and attractive way of doing this? It is my personal opinion that a Ford Tri-Motor let alone some old German aircraft such as the Junkers F13, Junkers JU-52 and others are not finished with a nice corrugated skin representation, will not look very realistic.
Best wishes
EDUARDO BARRIGA (Colombia)
Eduardo Barriga - 21/03/2021
Eduardo, Greetings, I certainly agree with your belief that the corrugated skin is an essential characteristic of the Ford Tri-Motor, as well as the various Junkers designs. Other aircraft have used corrugated aluminum on their control surfaces, the Boeing F4B/P12 series come to mind.
I suggest you review the construction article for the Harry W. Brown Ford 5-AT Trimotor (oz9426). He covered his Ford with single surface corrugated cardboard. I don’t think this material was ever used to make boxes. I’ve only seen it used to provide padding for oddly shaped items. The stuff was sold in the US in office supply stores and other stores selling shipping supplies. You could also find it at appliance stores, in their trash bins.
You might also check out Mike Stuart’s free flight website. Some of his designs are featured on Outerzone. He has a tutorial on simulating corrugations using paint to depict the shadows that is fairly effective. It might work on larger models, as long as you didn’t let people stand too closely.
Maybe you could source the cardboard in the US, if you can’t find it locally. Good luck on the Tri-Motor. I hope this helps. Take care,
James Hickman - 22/03/2021
Also see the Infield Engineering model TBD-1 at https://www.modelaviation.com/kohlmann-devastator - that page shows pics of him using masking tape then 4 coats of primer, to get a good-looking corrugation effect.
SteveWMD - 22/03/2021
Many years ago I built a peanut scale version of a Tupolev ANT-2 using Walt Mooney plans from the February, 1977, issue of Model Builder. (These plans are available here as Tupolev Ant-2 (oz11345). Mooney's solution to the problem of replicating the look of a corrugated covering was to draw parallel lines with a ball point pen on the tissue prior to covering. Although this sounds like a "low tech" approach, the overall effect was, in fact, quite convincing as can be discerned in the accompanying article's photos of his model. I decided to take the challenge to another level. I started by routing parallel grooves appx. 1.5mm apart in a 12" x 20" piece of 1/2" pine board. This was then cut in half to make two sheets with identical grooved facings. I then pressed heavy duty aluminum foil between the sheets to make a real corrugated covering that was applied with sparing amounts of PVA (we just called it white glue back then). Any distortions to the foil caused by cutting were easily corrected by aligning the cut pieces with the grooves and repressing. It looked just like real corrugated aluminum because that's what it was! This model actually did fly, but its duration and performance were hardly stellar.
Jan Novick - 23/03/2021
Fascinating. Pit says there was also an article in Flying Scale Models, by Martin Simmons, not sure of the date, where he shows aluminium sheet being run through a kind of "mill" made of two threaded rods clamped tightly together. That doesn't work, so in the end he clamps the aluminium sheet down and hand-scribes it, over a rack of 1.2mm wires that form a bed.
SteveWMD - 23/03/2021
Add a comment