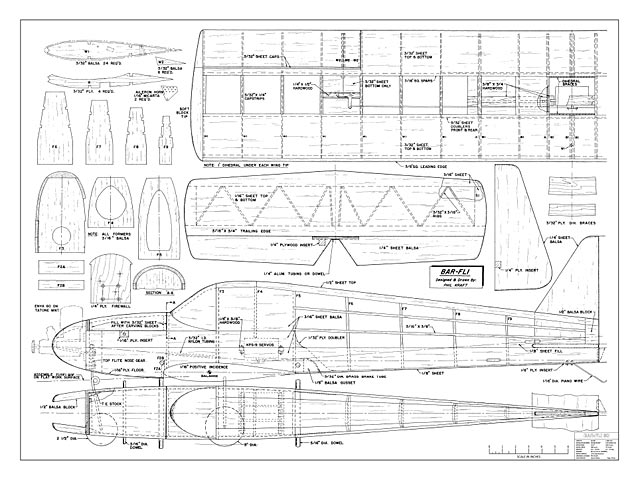 Quote: "To be a Champ requires planning, in depth as well, so our present World Champ felt it necessary to be ready for all conditions and designed a windy or turbulent weather plane to be ready for any condition at Corsica. Many were disappointed at the Internats because Phil did not fly the Bar-Fli since it's a good-looking, well-conceived, multi pattern aircraft.

About two years ago, we tired of flying the Mark II Quik-Fli (oz7483) and decided to design something a bit different. I had flown several of Maurice Franklin's deep fuselage designs including the Henchman (oz6942) and was very impressed with their smoothness. It was apparent that the increased side area was an asset in many maneuvers. Consequently, the Bar-Fli has plenty of fuselage depth.

The wing design is quite straightforward. I favor the constant chord barn-door approach for simplicity as well as performance. Later experiments with several types of taper wings on the Mark II Quik-Fli confirmed this opinion. The Bar-Fli has a full symmetrical 15% air-foil. Consequently, it is faster than the Quik-Fli. After trying several semi-symmetrical sections, it became apparent that the symmetrical section is a must for stunt use.

Overall, I've been quite pleased with the results and performance of the Bar-Fli. Possibly it is a bit small for competition; however, it is an extremely smooth flying aircraft which does very pretty maneuvers, particularly under adverse conditions, such as in high winds or turbulence. Although not designed specifically for snap maneuvers, it does them extremely well and has the unique ability of stopping instantly when the controls are released. You don't have to lead the little ship in spins or snap rolls which is a definite asset. The same applies to 4 point and 8 point rolls. In general, it is a very precise little airplane to fly and is one of my favorites for sport use.

Early last year. modifications were made to the Mark II Quik-Fli which resulted in the Mark III. In practicing for the Internals, I really couldn't make up my mind which airplane to use. However, it was finally decided to use the Quik-Fli because the weather conditions in Corsica were forecasted to be quite mild. Quite probably it wouldn't have made a great deal of difference whether I had flown the Bar-Fli or the Quik-Fli but perhaps because it is larger and has a thicker wing section, the Quik-Fli is a his smoother due to its constant speed characteristics. For contest use, the Bar-Fli is a little on the small side. I believe the Mark III Quik-Fli is about as small as practical..."

Update 10/09/2014: Replaced this plan with a much clearer copy, thanks to bulldogdrummond. This is is the same drawing, but has a title block saying: NASCO plan # V127.

Update 27/01/2016: Replaced this plan (again) with a better copy (scaled to correct size) thanks to doxilia. See thread at http://www.rcgroups.com/forums/show... thanks to dries for sending a link to this. 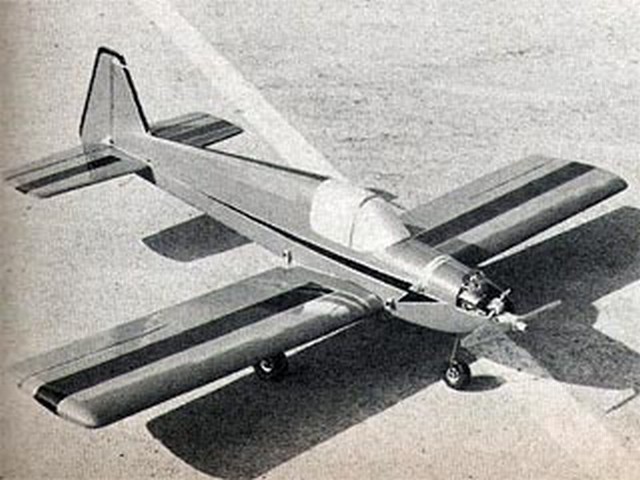