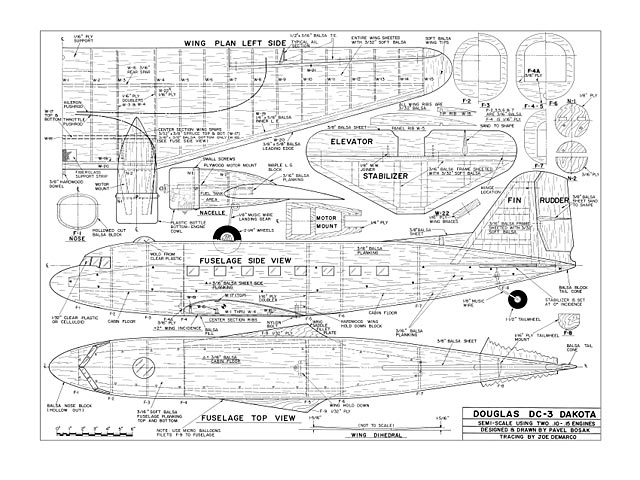 Quote: "There's never been another plane like it. Pavel Bosak pays tribute to the 50 year young DC-3 with his small 'space saving' version.

Off and on, over the years, I would periodically get the urge to build a model of the DC-3. Better known as the Dakota in my part of the world (Czechoslovakia), this plane has probably attracted the modeling interests of many hobbyists. Both its design and its rich long his-tory worked their magic on me and I even got around to doodling two versions of a DC-3 and even began some construction. Unfortunately, I didn't finish it, having gotten side-tracked by several larger size projects. When I finally got back to the DC-3, I was in the mood for a smaller model and the fact that two .10 engines were just 'sitting' around my workshop unused brought me to this design, a model with a 57 inch wingspan and an area of 575 square inches, That's the history of this 'space saver', semi-scale Dakota,

Birth of a legend. The history of the real DC-3 is very simple and logical. After its predecessor, the DC-2, had been successfully introduced into airline service. American Airlines officials went to Douglas Aircraft and related their need for a newer transport which could be equipped with beds for night flights. The DST, or Douglas Sleeper Transport, was born, and what was to become known as the DC-3. Its basic design followed that of the DC-2 pretty closely but the new plane's fuselage was roomier, its wing span longer, and the wing area greater, Even the tail surfaces were larger and the landing gear more robust. The 14 seats in the roomy passenger cabin could be converted into seven upper and seven lower beds.

Six months after the prototype's maiden flight (December 17, 1935), American Airlines began operation of the DST in June, 1936 subsequently followed by United Airlines in January 1937, and TWA in June 1937. In the same year, Douglas came up with a more economical version of the DST, which was essentially the DC-3 with three lines of seven seats for a grand total of 21 passengers altogether.

The DC-3 was a real sensation not only in the US but throughout the world of air transport. Its operating expenses were lower by half in comparison to the economical DC-2. It doesn't often happen that so many important technological and operational elements happily mesh in the design of one aircraft.

An Army version of the DC-3 was ordered by the Army Air Force in 1940. its construction was strengthened for heavier cargo, it had two large cargo doors, and it had attach points for an exterior cargo pack. The military derivative of the DC-3 was called the C-47. During WW II it was nicknamed the Skytrain and the C-53 (a C-47 with a smaller door and used for troop transport) was dubbed the Skytroop. Britain received 1900 of the military DC-3's which they called the Dakota. Soon, much of the world adopted the British nickname and, after the war, used all of the many DC-3 variants in civil transport. Their quality and durability was attested to by the fact that some of them are still heavily used today.

Construction. Wing. Building my version of the DC-3 is not complicated and can be readily managed by any modeler who already has the experience of a few projects behind him. Begin with the outer wing panels by preparing ribs W1-W15 and the rear wing spar W16, and the center wing section spars. W17 and W18. To spare you the extra effort of cutting each of the wing ribs separately, let me suggest a method I use called 'rasp interpolation'. 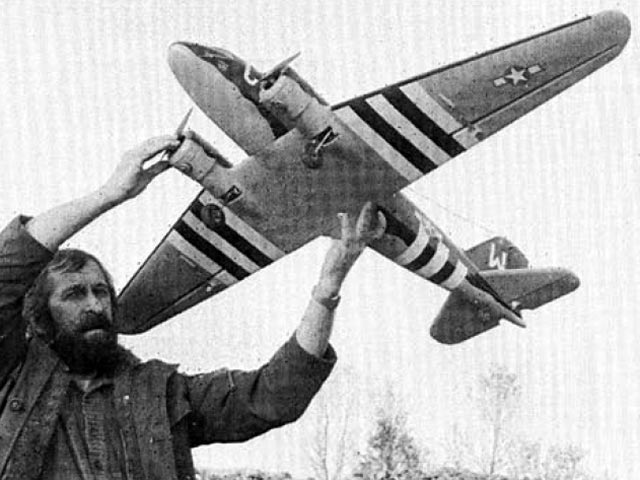