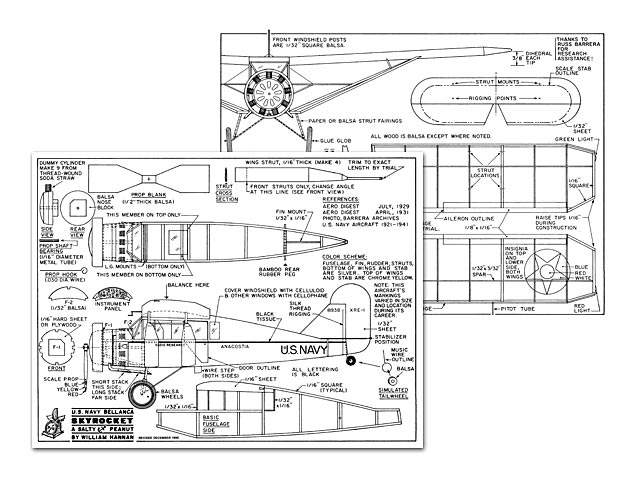 Quote: "The thirties return to life as Bellanca wings once again lift into the air in model form; suitable for the Navy Aircraft category in the indoor flying scale event or Peanut Scale. This 'oldie' used by the US Navy for radio experiments; model can reach one minute.

This model was designed with several purposes in mind. It is suitable for the NAVY AIRCRAFT category of the indoor flying scale event. This class was originally proposed by VTO Editor Dave Linstrum for the Nationals contest, and has been sponsored by the National Free Flight Society. The idea was to put greater emphasis on naval aircraft, in recognition of the fact that the US Navy has long served as the Nats host. In addition, it was hoped that the class would attract a great variety of models, which naturally add interest to any contest.

Initially, many people are apt to think only in terms of well-known Navy planes, such as Corsairs, Wildcats, Avengers, etc, and while these would make acceptable choices, they certainly are not the only options. Consider this selection of machines which have been employed by the US Navy: Stinson Reliant; DeHavilland Puss Moth; Lockheed Altair; and Beechcraft Staggerwing. Or how about these obscure, but perfectly legitimate examples: Fokker D-VII: At least six were assigned to the US Navy, as were a few of the similar appearing Fokker C-1s. (Reference: AAHS Journal, Summer 1960) Nieuport 28, Sopwith Camel, Sopwith 1-1/2 Strutter, SE-5, and Hanriot. Believe it or not, most of these WW I types were actually flown from the decks of US Navy ships! (Reference: AAHS Journal, Summer 1965). If weirdos are your bag, how about these: Pitcairn autogiros (both winged and wingless versions); PAS Gyroplane; Macchi M-16; or Stearmond-Hammond Safety Plane? Like to play it safe with prosaic, but easy-to-fly lightplanes? Check this group: Cessna Bird Dog; Fairchild 24; or Piper Cub. So it can be seen that there is an almost endless variety - and we've only mentioned aircraft of the US Navy. The event is also open to foreign navy planes.

Our little Bellanca is also small enough to be eligible for Peanut Scale. Under the rules (which were originated by the Bridgeport, Conn. Flying Aces Club) these models must have a wing span maximum of 13 in and a minimum of 10 in. PEANUT SCALE contests are now being held in several parts of the country as auxiliary 'fan' events, in conjunction with more serious classes.

The appeal of PEANUTS can be attributed to several factors. Among the older modelers, there is an element of nostalgia attached to these tiny terrors of the sky, since they are strongly reminiscent of the old pre-war 10 and 25 cent kits. Among the youngsters, the small cost of materials required for construction is an important consideration. Usually, the average builder can round up most of the needed supplies from his scrap box, and even the time required is minimal as compared to larger models.

In PEANUT SCALE, the accent is on reasonable scale, rather than exact scale. It is surprising just how much detail can be incorporated in a small model and still retain good flying characteristics. In fact, these models can be made to REALLY perform. Flights of 30 seconds are common and a few Peanuts have even managed to exceed one minute. So much for the sales pitch, let's get on with this project.

Construction. First decide if your model will be used for indoor flying, outdoor flying, or dual purpose. If strictly indoor flying is contemplated, the model should be made of the lightest available balsa wood and covered with condenser paper. Conversely, for a strictly outdoor job, more rugged materials should he employed, and Japanese tissue can be used for covering. Some Peanut pilots, especially on the East Coast, even finish their models with several coats of opaque dope, and rely upon greater amounts of power to make up for the extra weight.

With this type of model, colored tissue is generally used instead of colored dope for the overall coloration, but small details are painted to provide a more realistic appearance than that of the rather stark, purely indoor models. The model shown in our photos is of the compromise type, and can be considered a dual-purpose aircraft.

Fuselage: Our model is built in standard good-old-days fashion, starting with the two basic fuselage sides. When the sides have been completed, bevel the inside of both tail posts slightly, and glue them together. Add the cross-members, checking to be certain that the fuselage remains square as viewed from the front, and true as viewed from the top. Working directly over the top view will help ensure alignment.

F-1 should be made from very hard balsa, or even thin plywood, for extra ruggedness. Be sure to glue the little instrument panel drawing to F-2, as it adds a little dash to the interior. The five short nose stringers may now be installed, as may the windshield posts.

At this point, the hard balsa landing-gear mounts should be installed. Allow just enough room between them to accommodate the landing-gear wire.

Landing Gear: Bend the wire landing gear members to shape, bind them together at their lower extremities using read and glue or epoxy, and insert the assembly between the LG mounts, being generous with glue. While you are at it, it is good to add a small fillet of glue to all of the important fuselage junctures, such as the to pegholders, as these areas are subject to severe loads.

On an indoor-only or very light outdoor model, you may construct all of the LG struts from balsa and eliminate the wire. On a more rugged outdoor version, it is suggested that the rear struts be made of a flexible material, in order that the main gear can flex rearward during hard landings.

For simplicity, the tail wheel may be simulated as shown on the plans. It functions as a skid since the wheel cannot revolve, but it is strong and light.

Tail Surfaces: We used 1/32 sheet for the tailplanes, however if you prefer, you may substitute built-up surfaces, which are more in keeping with the overall translucent effect of a stick and tissue model In either case, strive for light weight, to minimize the need for nose ballast.

Wings: The wing panels are constructed in the traditional manner, but be careful to select straight, stiff wood for the leading edges, trailing edges, and spars to resist warping. The 1/16 square wing tips must be elevated 1/16 during construction, as will be apparent from the wing tip front view drawing.

The root ribs are installed at a slight angle for dihedral purposes. (Some people seem to get away with using scale dihedral, but I prefer the safer approach.) The wing struts, sort of a Bellanca 'trademark', are cut from 1/16 sheet balsa, and sanded to a streamlined cross-section.

Nose Block & Cowling: While this assembly may look a little formidable at a glance, it is composed of simple elements and can be constructed quite easily. Begin by laminating 3 sheets of 1/8 thick balsa for the nose piece. Cut and sand to the shape shown on the plan. The easiest way to do this is with a small hand grinder used as a lathe; if not available, the job can be done nearly as well by hand.

Next cut out the 1/8 thick hard balsa plug, which must be a snug fit into F-1. Glue the plug to the back of the nose block, and allow to dry thoroughly. Drill a 1/16 diameter hole through the center of the unit to accept a length of brass or aluminum tubing which serves as a propshaft bearing. Be certain to roughen the outside of the tube with a file, so that the glue can get a good grip on it. If any glue seeps into the inside of the tube, clean it out before it hardens. Seal the wood and paint it silver.

The dummy cylinders are made as follows: If the model is for indoor use the cylinders are constructed from a soda straw. For an outdoor job, a balsa dowel may be used instead. In either case wrap it evenly with sewing thread. There are two approaches to this. The time-honored method is to try for even spaces between the thread 'cooling fins' (which is very difficult to do) in a consistent manner (at least for me!). Another method which is easier and still looks quite realistic, is to wind on TWO threads at once. If one is black and the other grey, the visual effect is surprisingly good.

After the thread is wound on the core, give it several coats of clear dope to seal it in place. Next, slice the assembly into nine equal length cylinders. Place the nose block over the front view drawing and mark off the locations of the cylinders, which may be glued to the outside of the nose block, or glued into shallow holes drilled for the purpose. A pity that the Williams Bros doesn't make this size - yet.

The ring cowling may either be stretch molded from thin acetate, using a D-size flashlight battery as a mold, or made up from a cardboard or balsa ring and a strip of bond paper..." 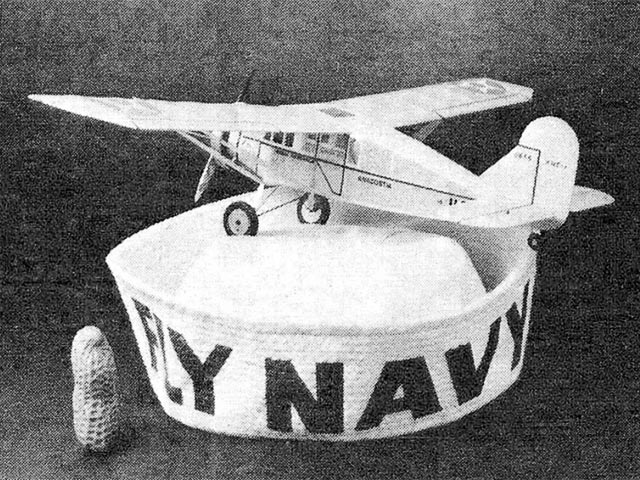