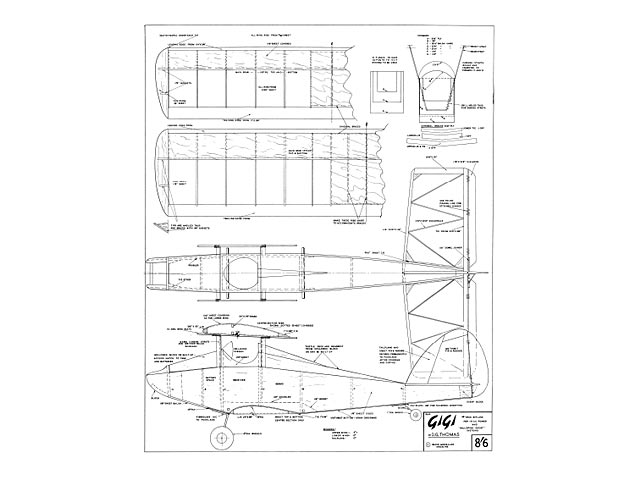 Gigi. 36in span biplane model for 1.5cc power and Galloping Ghost systems. As requested on the wanted page.

Quote: "Gigi is my first successful Galloping Ghost controlled model, after many unsuccessful projects. The reason for my success with this model is due mainly to the acquisition of an old RCS pulse-proportional transmitter - and the change over to push-rod control of the flying surfaces in the model, instead of the usual torque-rod and 'bird cage' at the rear end. This ironmongery type of control fitted to a model is, I think, the reason why so few modellers seem able to cope with Galloping Ghost. The bending of the bird cage and the positioning of the hinge-lines relative to each other, is something which has to be spot on if it is to work correctly, whereas the push-pull system used in Gigi is simple to install and gives completely independent adjustment of rudder and elevator. Of course the whole external set up is much neater and allows scale type tail surfaces to be used.

Gigi herself was an attempt to capture the lines of the old fashioned 'cobby' biplane shape without too many frills in construction. With a 1.5cc engine the model is very nippy and can be flown in fairly strong wind conditions. The original model started life with a Webra Record, but the present power unit is something of a veteran, being a reconditioned 1.8cc Elfin PB! Nevertheless it is giving excellent service.

Construction should not offer any difficulty to the average modeller, the assembly of the cabane struts to their respective formers being, perhaps, the only part requiring special attention..."

Note the model photo is a screengrab from the youtube video by Andrew Shering at https://www.youtube.com/watch?v=DTwQO35HRJs 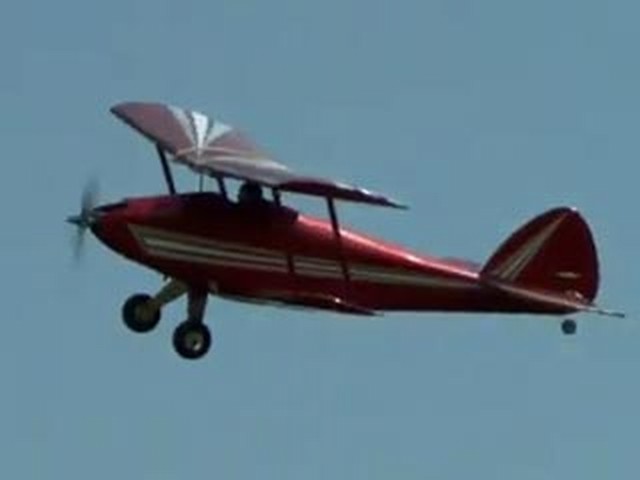 I built this in the 60s and installed 3 channel and it was the perfect weekend flier ...Would like the challenge of building and flying as 4 channel for old times sake... Regards
TomVenters - 06/05/2014
Add a comment