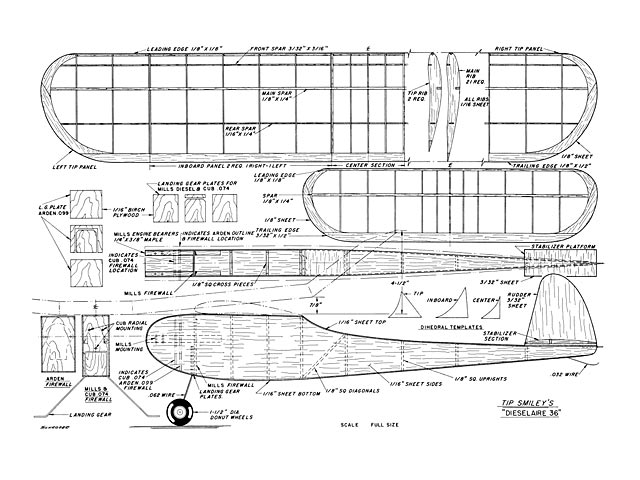 Quote: "With the advent of the new small size engines, it was easy to recognize the potential opening for free flight design. To utilize these potentialities, the Dieselaire 36 began its career as a very hasty pencil sketch. After several more sketches, and some area calculations, the final design was decided upon. Understand, however, that this model was never intended to climb straight up; sport models just don't operate that way. For a full days flying though, the Dieselaire is ideal.

The model pictured is powered with one of England's finest small diesels, the Mills, which has a displacement of .045 cu. in. Of course it is quite impossible to buy one of these little engines at every corner model shop, so the new glow-plug engines may be substituted, up to the O.K. Cub .074.

Contrary to popular opinion, sheet balsa con-struction is actually quite light, and it's a known fact that it is much stronger; hence we decided on this type of construction. Simplicity is evident from the plans.

One of the beautiful features of the sport type model is that you can get in so many fine flights in such a relatively short period of time. A bad crash is generally a foreign thing to a good sport flyer, so join the gang and give free flight that long awaited 'shot in the arm.'

We begin construction with the fuselage. Merely cut the two sides of 1/16 hard sheet balsa, and cement the 1/8 square balsa up-rights in place on the inside of each sheet. (Positions of these uprights are shown in dotted lines on the plan.) Now cement the two sides together at the extreme rear, and add the firewall. When cement has dried thoroughly, place the cross-pieces in place at station No.4. You will notice that the fuselage has the same width from the nose to station No.4. From this point to the rear, the sides will auto-matically assume the correct contour.

Next add the remaining cross-pieces between the sides. Now cement the engine bearers firmly in place, and add the landing gear, which is of 1/16 dia steel wire. Landing gear mounting plates are shown on the plan. Use cement liberally as the landing gear takes the brunt of the abuse encountered in landings. As a final step, the top and bottom of the fuselage are added. At points of extreme curve, such as the nose and swayback, run the grain of the wood cross-wise. After sanding thoroughly, cut the opening for your engine. This completes the fuselage assembly.

At this time we begin construction of the fin and stabilizer assembly. The fin is simply cut from 3/32 medium sheet balsa, while the stabilizer is of built-up construction. Leading edge is of 1/8 square hard balsa, center spar is of 1/8 x 1/4 hard balsa, and the trailing edge is of 3/32 x 1/2 in hard balsa. Ribs are of 1/16 x 1/4 in stock. Trim ribs to contour after stabilizer is completed and has been removed from the plan. Now the tail assembly is com-plete, leaving only the wing to be built.

As construction is conventional, the wing is built right over the plan. Five separate panels are required to complete it. These are the center section, the two inboard panels (one right, one left) and the two tip panels. Notice the rugged construction; an ample number of strong spars practically guarantee a long life for your model. Don't worry about the extra weight, because this model is for sport. The dihedral templates shown on the full-size sheet are used to give all the ribs in each respective panel the correct slant..." 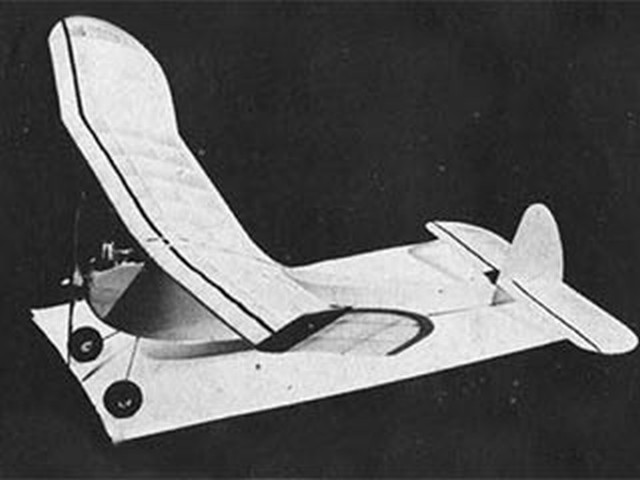