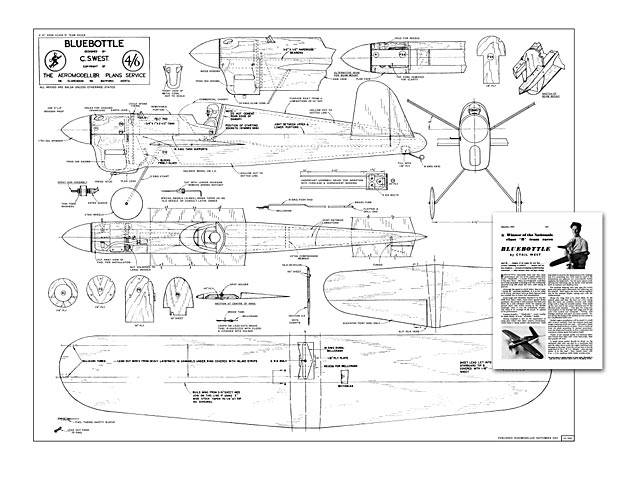 Quote: "Winner of the Nationals class B team races. Bluebottle by Cyril West.

Distinctive semi-scale lines and first class performance are two of the points which have made Bluebottlea centre of interest wherever it has been flown. Many knowledgeable modellers have been surprised at finding only the moderately powered Frog 500 under the cowl, after seeing it perform.

Although the speed is a little below that of most 'racing 29' powered machines, it is in the order of 85 mph and about twice as many laps per tank are covered due to lower fuel consumption.

Good range and reliability enabled it to win the 1952 West Essex Rally Team Race against faster machines; the model in this instance was built and flown by a club colleague whilst the original job proved itself with recent success in the British Nationals when it won the Godalming Trophy. Ten miles at an average of 63 mph is typical of its performance.

Constructionally, Bluebottle could hardly be more simple, it is an all-sheet model. Strong emphasis is laid on the importance of using glue rather than balsa cement, particularly where balsa is being united with hardwood. Half inch sheet is used for the laminations of the fuselage and it is surprising how little need be used if the laminations are planned out economically before applying the balsa knife. By the same means much carving and hollowing can be saved, with benefits both in expense and building time.

For external shaping, only spot glue the centre seam and prise apart afterwards for hollowing out the interior. Then reglue the lower halves together and fit the internal details, taking care with the undercarriage.

Shape the wing from in 3/8 in sheet balsa, fit the control plate and then the lead out wires, seeing that the latter are carefully covered with inlaid strips with a drag free smooth surface. Then make up the tail unit to the correct dihedral and fit the elevator horn securely. Now glue the wing into true position in the fuselage slot, align and lit tail unit with control rod connected. Finally, add fuselage portions and sand all joints smooth. Do not skimp the fixing of the tailskid as this comes in for considerable hard wear.

Radial engine installation will be eased if a small slice is sawn carefully from the exhaust stack and longer crankcase bolts are used. Alternative beam mounting detail is shown on plan. Tank is made up from tin plate according to normal procedure; note the shape and location as this is important for consistent engine speed throughout flight.

Finish of the original model was sanding sealer and Oxford blue dope with white trimmings, then fuel proofer all over.

A small boost socket should be fitted on the starboard side with one lead to a crankcase bolt and the other down under the engine bulkhead and through to the plug. Find the correct size of female press stud to fit a KLG Miniglo plus top and solder it to the lead. Best results come with 9 x 8 inch medium width blade wooden prop." 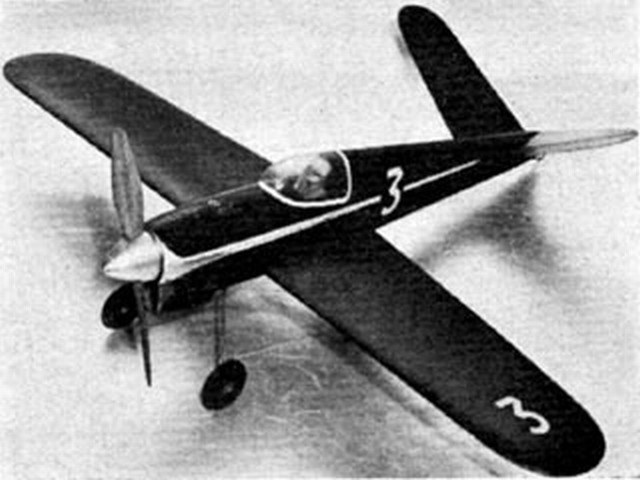 In the 70s/early 80s, I was a member of the Godalming model flying club. Cyril West was a good friend. He designed a number of models published by the old APS plans service. One was Bluebottle, and he still had the original model with a Frog 500 in it! We were good friends, and together with our wives used to dine and socialise together. Cyril sadly died due to diabetes. His wife asked me to have all his models, engines etc. Because they were valuable, Ron Moulton who was editor of Aeromodeller, put a big advert in for me, and we raised a considerable amount for Cyril's widow. Bluebottle I gave to Alwyn Greenhaugh, who at the time was trying to put together a museum of model aircraft. Don't know if he ever did? But I kept Cyril's original Bluebottle plans, plus a number of plans of models he never published. Sadly, many house moves later, they have disappeared!! Cyril West was a delightful man, he learned to fly P51 Mustangs in Canada during the war. He was a clever designer of models, including some wonderful engines he built in his converted coal house! RIP Cyril.
TimS - 27/08/2018
Add a comment