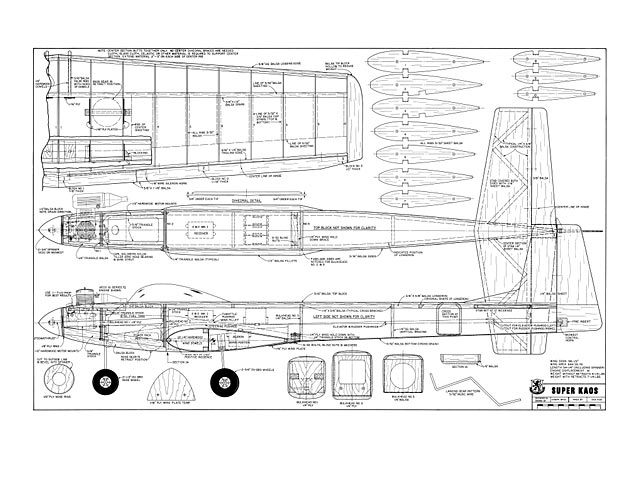 Quote: "A giant step forward in a long line of contest proven pattern ships, the Super Kaos was designed to do the maneuvers more precisely and responsively. By Joe Bridi.

As time passes we seem to need a more responsive and more true flying aircraft and, only with time and experience, can we try to perfect a model that will do the maneuvers exactly as we want to do them. Different changes and ideas have to be tried sometimes they are beneficial and, at times, they fall short of your expectations.

In designing the Super Kaos, we tried to keep the excellent slow flying characteristics of the Kaos (oz6251), yet fly as well, if not better, than other top competition models currently in the pattern circuit. There were many minor changes made in updating the Super Kaos and, as we continue in this article, we will mention a few of them.

The wing rib patterns are the same as the Kaos although the tips and aileron size as well as the aileron location have been changed. The rudder is slightly smaller, but fuselage height has been added in the rear doing away with the sub-rudder. The elevator was brought forward approximately 2-1/2 in which helped the Figure M and the Spin maneuvers.

The wing position was raised 1/4 in up and 1/4 in forward. The hatch was eliminated for strength in the nose section. If retracts are installed, the latter would be weak if both a nose gear or retract and a hatch were installed. Access to the fuel tank is now through the wing section.

A 2-3/4 in spinner was used instead of a 2-1/2 diameter unit since we felt the added room would be put to good use giving the modeler more room in which to work. The bottom of the tank compartment is also deeper to accept any retract that you may want to install. Overall, similar construction to the Kaos was maintained since we felt that this simplified the building task considerably, I know that you would rather be flying instead of building at home but, even with the ease of construction, we wanted to present a highly competitive aircraft that would, in the hands of a proficient competition flyer, outfly the best in the pattern circles.

A lot of thought went into the Super Kaos prototypes - eight of them, to be exact. It has done quite well for the author and I hope it will do as well for you.

Before getting into the general construction, a few notes are in order. The amount of aileron, elevator, and rudder travel may vary with each model, but here are the surface travel dimensions that have worked well for the author..." 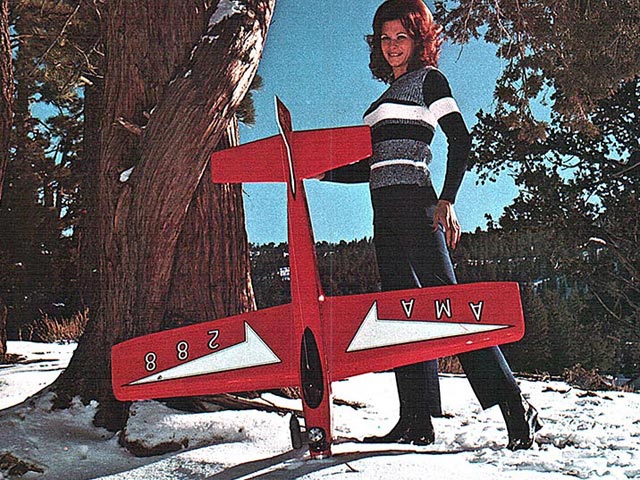 I've built and flown several Super Kaos's and the variants like the Ultimate Kaos and Utter Kaos. I have even designed my own variant of the Kaos, the Xtreme Kaos and plans are availabe for free on my website see http://www.jaymc.com/rc/xkaos.htm. The Kaos line of airplanes are some of the best flying planes available, bar none!
Jay McMullan - 25/12/2019
I just completed this Bridi Super Kaos [pic 007] from the plan oz5523 obtained from you.
Dave Wartel - 17/09/2021
Add a comment