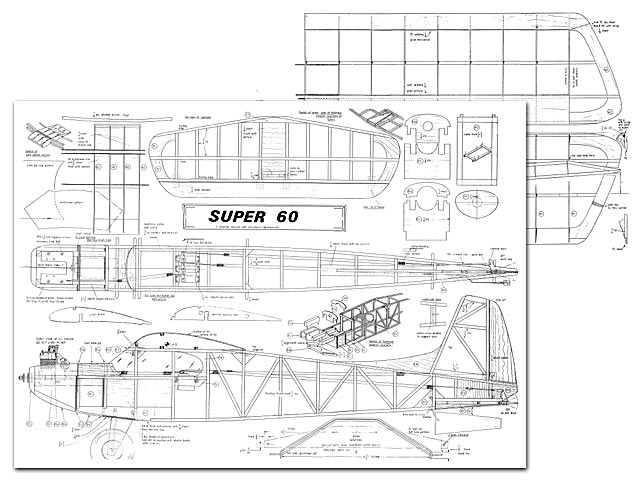 Update 22/05/12: All builders take note. BrianCox mailed in to say: "The plan is a normal late version of the aircraft and, being a kit plan, there were no rib patterns on it. However, someone has added two hand-drawn rib patterns, but they're nothing like Super 60 ribs, they're the rib patterns for the first model of the Junior 60."

For more detail on this design, see RCLibrary page at http://www.rclibrary.co.uk/title_details.asp?ID=1069 for free download of the complete book 'Radio Control Big Four' from 1964, which contains a section of several pages written by Ernie Webster detailing the design changes between the KK Junior 60 (oz1398) and the KK Super 60. 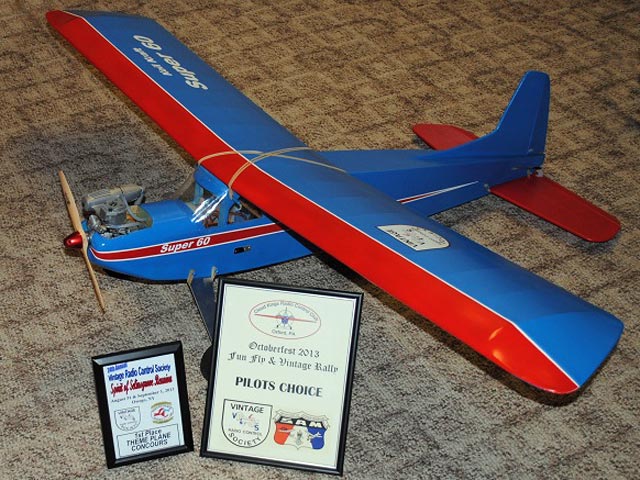 As the wing is constant chord and section, only one template is needed. The actual rib template is shown on top of the fuselage so the best thing is to use that and not the two hand drawn ones.
Daithi - 07/01/2015
hi I am building one from this plan the plan reads '2 inch dihedral under each wing tip' this must be wrong for a 3 channel version mine has now 5 inch under each wing tip which looks right.
anon - 03/12/2015
Hi Steve/Mary, here is a photo of the Keil Kraft Super 60 I have build this winter from the Outerzone downloaded plan [see more pics 005]. Change made to dihedral, plan shows 2 inch under each wing tip mine has 5" under each tip, looks good to me. Engine an OS 25, covering green matt solartex sprayed black added. This will be my mobius camera spy plane among things, light bomber missions are planned too. The color scheme some what like an RAF DHC-2 Beaver. This Super 60 still awaits markings, designations and missions after test flight resulting in c of a to my approval (a good feeling you have after flight test) and a nice spring day that makes me say 'lets go out and do it now'
Anon - 29/01/2016
The wing airfoil section was a standard Clark Y. Have still got the original wings from 1968.
xmellor - 12/09/2016
Hi Mary/ Steve, here are some photos for the plan page of the Keil Kraft Super 60, built from the down loaded plan [more pics 006-011]. It uses an O.S. 25 Sf and 9x4 prop. Modification made are two spruce 4 inch sq wing spars, dihedral 5 inch under each wing tip and slightly reinforced around landing gear attachment. It has by now made many fine flights, most in southern France. I like this aircraft so much I will build a 3rd this winter for next season. It takes a camera also, this can be seen here in action: www.youtube.com and here.
Anon - 23/09/2016
Hi, this is not the Keil Kraft version (which had an aerofoil tailplane and other structural differences). This is the Ben Buckle version.
mse - 23/04/2019
hi MSE if this is not the keil kraft version why don't you send in a full size scan of that plan so all (and me) can build that one.
smd - 24/04/2019
might as well do a follow up on this now a few years later , I even build two more outerzone plan super 60s , so now have 4 of them and they have flown lots, most in France and Spain. and my old youtube link is dead so here is a new one
https://www.youtube.com/watch?v=ITdUdQsb81M&feature=youtu.be On these places I fly I also camp.
I am unsure what to build next , these 4 are all still perfect and would anything else be better for my specific use ? wings are 2 piece , stabilizers come of, as does landing gear, which allows for minimal space in the car .
Joost - 21/10/2019
This prompts me to get out my old KK kit and check out the plans and the airfoil. The airfoil shown on these plans is not a "standard Clark-Y", it only resembles one from a distance and is thicker with a sharper LE. If the plans are decent enough I'll get them scanned.
Mike D - 14/11/2019
Hi Steve/Mary, just to show I actually finish a few as well as submiting plans, here's my Super 60. Covered in Solartex with painted trim, OS40 four stroke [more pics 012, 013]. RSC single channel RC for nostalgic photos only! Cheers
Mike Jones - 18/11/2019
Hello everyone, I have just completed the construction of a Super 60, from a map of Ben Buckle, it will fly soon! powered by an OS 40 FP engine and as a radio Futaba FF6 in 41.060 Mhz, as at the time! Here is the link to the page of my blog: http://acro45.eklablog.com/nouveau-super-60-a175294980
Christian - 23/11/2019
Add a comment