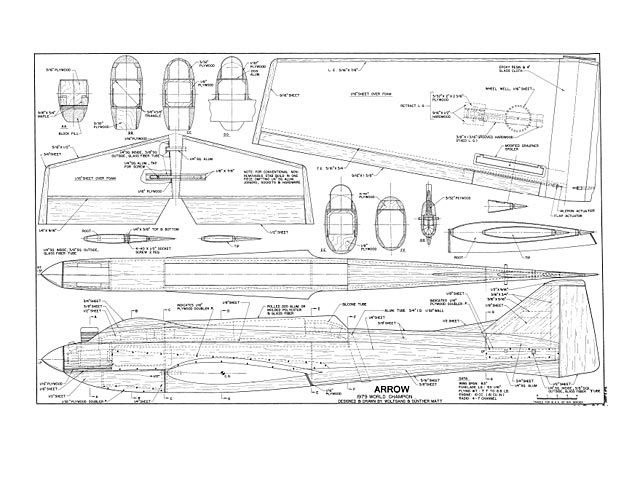 Arrow 60. Radio control pattern plane. 1979 World Champion. This is the Arrow as printed in MAN.

Quote: "Mode! Airplane News has been a showcase for near-perfect pattern planes ever since it began publishing national and world championship aircraft with the Orion (June 1960). The majority of winners have graced these pages over the years and all have shown a striking similarity by being honed to near perfec-tion through a series of almost constant and subtle modifications on a good initial design. This is true of Hanno Prettner's Curare (oz5527) series, Rhett Miller's Compensator, Phil Kraft's Kwik-Fli (oz6526), Don Lowe's Phoenix (oz5864) (that ship must have seen a dozen or more variations) and this latest winner, Wolfgang Matt's Arrow.

The Arrow is the reigning world champion aircraft as a result of its win in the 1979 South African World Pattern Championships. The aircraft goes back to a 1973 design called Super Star, which was followed by the 1975 World Championship Atlas, and now the present Arrow. The airplane is, for all intents and purposes, an Atlas modernized to meet current FAI requirements.

Wolfgang Matt felt that the square and snap maneuvers would require a different airfoil with maneuvering flaps and a spoiler. Unlike the integrated spoiler/flap made popular by Prettner, Matt opted for a separated system. This was accomplished by incorporating a Graupner spoiler that could be coupled with or operated separately from the flap.

Since the tuned pipe has become standard in FAI competition because it can meet the silencing requirements of international events while providing increased power, Matt uses the device. However, he did not like the appearance of an external pipe, or the fact that an external pipe unquestionably causes aerodynamic problems since it creates an asymmetric drag pattern. Hence, Matt opted for an interior mount that becomes the biggest single change in the Atlas configuration. The system Matt developed is simple and straightforward.

To ease transportation problems, a fact of life for worldwide competitors, the stabilizer on the Arrow is removable. It can be made in one piece, but I would strongly suggest retaining this feature. The separating stabilizer halves will lead you to individual drive points for the elevators that have a distinct advantage in adjusting for accurate tracking. You might want to experiment with a flying stab using Giezendanner hardware that should fit the Arrow arrangement very nicely.

A combination of built-up balsa fuselage and foam wing/stab is an ideal way to go for pattern aircraft since such structure ab-sorbs vibration very well and keeps equipment somewhat happier during those long practice sessions. Scanning the plans, however, leads one to believe that the Ar-row's fuselage should be very easy to develop in fiberglass. If you prefer this type, I would suggest a two-piece plug be carved to retain the removable pipe cover. A single plug would require cutting up the fuselage top and installing a pipe floor, with consequent weakening of the structure. It is wise to separate the pipe from the fuselage interior, and it's very convenient to be able to get at it through the cover for inspection and adjustment. The lower fuselage exhaust point should definitely be retained although the tempta-tion to exhaust straight out the pipe hom-ing will be great. By avoiding a direct blast on the fin, Matt has eliminated any flight problems, real or imagined, stemming from the high speed, turbulent flow coming from the engine exhaust. Secondarily, the exhaust point shown will keep things a lot cleaner at wipe-up time.

Construction of the Arrow as shown on the plans should pose no great problems for any experienced builder, and detailed plans are hardly needed..." 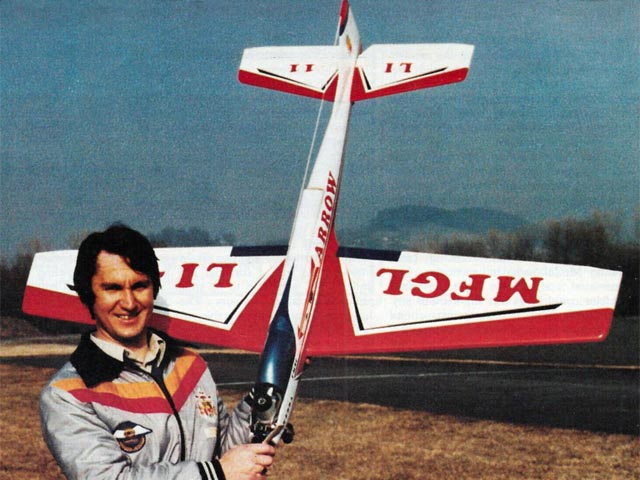