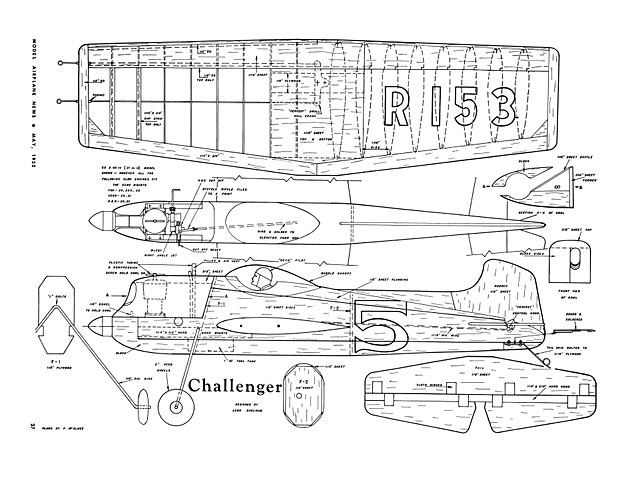 Quote: "When a veteran stunt man and old-time free flight designer goes after team racing, things have got to happen. Here is the story of one airplane with dope on various engine set-ups. The Challenger, by Leon Shulman.

Team Racing is a challenge today to the average control line flyer - it was to us too. After designing, building and flying many control line models from the early control line days in the early 40's when 'Daddy' Jim Walker toured the US with his famous Fireball (oz5746), flying straight and level advanced to the present stage of screwball aerobatic maneuvers which all but bends the plane in the middle. As fascinating as stunt flying is, it too becomes less of a challenge after you complete the basic average stunt patterns, and like many of you, we too looked towards newer horizons. Team racing is the newest and is increasingly becoming the most fascinating phase of this grand hobby-sport of the 'spin-dirties.' Being green at this, we studied the AMA rules on team racing which outlined the idea on the subject and laid down certain specifications. Following these, plus past model experience, brought about our model to accept this challenge - and was promptly named - the Challenger!

The Challenger is no unorthodox model, and as a matter of fact is conventional except for a few specific features which lends to the airworthiness and durability of this model - features which experience has proven to be a necessity in team racing. As a flier, the Challenger responds very smoothly to control and will more than hold its own in any race. The balance of the design layout is ideal in that it is groovy in flight. Because of its light construction, it takes-off quickly and, when levelled off to normal flight, stays put, yet will react to any definite control movement when overtaking another racer or coming in for a landing.

These fine characteristics of the Challenger were developed over several months of active team racing and the model herewith presented incorporates all the features found to be necessary in such a model. This model too has been flown with four different engines to date, all with great success, but with varying speeds. The first version of the Challenger was powered by a Fox 29 Racing Special engine and proved to be the fastest version to date. This model sported a tin-can type cowl. around the engine, similar to the type used on the Berkely Quest (oz9969). It was clocked on several official qualifying flights at 100.2 mph. The engine used was stock with no modifications or al-terations during the qualifying speed dashes. For the other races, the intake stack was closed off at least 50%, by plugging the stack with a K & B intake restrictor or a simple plug made of wood. Although this was the fastest combination, it was found to use con-siderable fuel—the price we pay for speed!

The second version used a K & B 29, the early version of the Glorw-Torp. This version clipped off a neat 92 mph and was very consistent in performance. It too used the tin-can type cowl. The third version was altered only to accommodate a Veco 29. The performance was only slightly better than the K & B 29, doing 93 mph average, and it too proved to be very reliable and consistent. By the way, if you'd like to use a larger engine, the K & B 32 and the Veco 31 will mount in the same mounts as the other engines with very little re-working..." 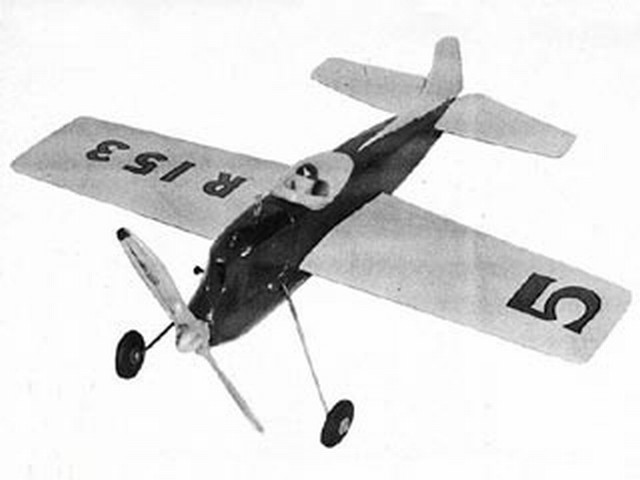