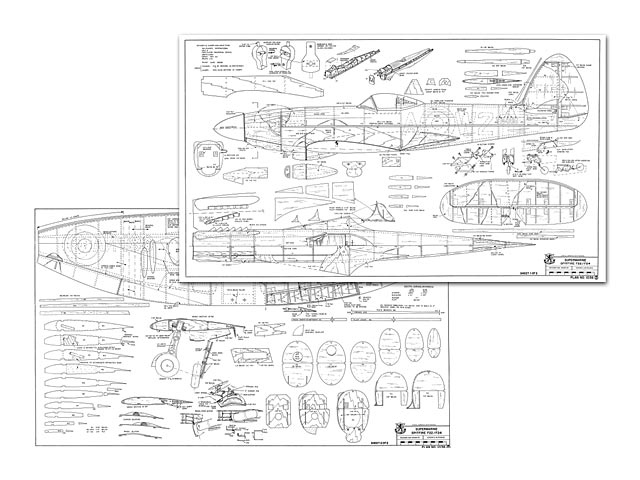 Quote: "Supermarine's Spitfire was the only Allied fighter to remain in continuous production throughout the whole of WW II; some 20,351 were manufactured. During the period from 1936 to 1946, its power increased by 100%, its weight by 40%, its maximum speed by 35%, and its rate of climb by 80%; quite a remarkable history of development. Even at the end of its long career, it remained one of the fastest piston engined fighters with a top speed of 454 mph at 20,000 ft. This achievement was made possible by the introduction in the Mk XII Spitfire of the 2,000+ hp Rolls Royce Griffon engine to supersede the 1500 hp Merlin.

It wouldn't be too far from the truth to say that the later Spits were in fact different aeroplanes from their forebears. For instance, the F22/24 variants had a redesigned wing from the one which had continued with only superficial visual changes for 8 years previously, and a larger tail assembly. With their prominent rocker covers and bubble canopy, these late Mark Spitfires certainly looked formidable, whilst retaining that sleek elegant (as opposed to functional) attraction for which the entire Spitfire series is remembered.

My model depicts an F24 from the only Squadron to fly the type in battle, No. 80 Sqn. RAF, which fought in the Korean war. The F22 and F24 Spits, though not as well known as the earlier Marks, were flown by 13 different RAF squadrons, and some were sold to the Rhodesian and Egyptian air forces. I've shown pretty comprehensive details of the 80 Sqn. markings on the plan, to help those who might not have huge reference libraries of colour schemes.

I have recently been considering replacing the now well used X45 with my much older, but more torque OS .61 FSR, in an effort to simulate the Rolls Royce Griffon a bit more convincingly.

Don't forget that a beauty like this ship is going to attract a crowd at the flying field. I've seen 'em stand shoulder to shoulder and two deep ...so make sure you've done all your preparation before you get to the flying field, so that you can give the guys something worth waiting for." 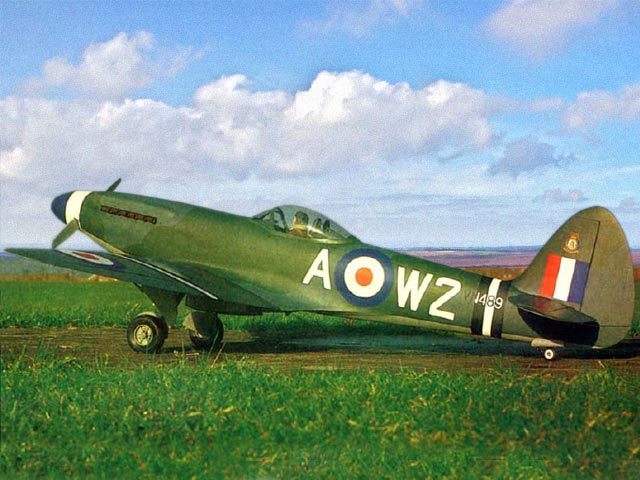 Here are some pics of my Gordon Whitehead Spitfire built from the plans on this site [more pics 004-006]. I changed it a little to look like a Seafire 46. It is electric and has flaps, retracts, and sequencing outer gear doors.
LindsayPucholt - 06/09/2016
What is the weight of this model?
RPC - 29/08/2017
The weight is 7lb and 8oz as per the data sheet in article.
GeoffO - 29/08/2017
I need help. I'm building the plane in 230 cm and I do not understand the dihedral.
Michel - 12/02/2019
The wing centre-section is flat. The bend is at rib W2. The part B1 is a 1/8 plywood brace that forms the correct dihedral angle, when it is fitted against the main spar, between ribs W1 and W3. Does that help?
SteveWMD - 12/02/2019
My model (the one pictured above, pics 004-006) came in at 6lb 5oz. With the lighter radio equipment now available and trying to choose light wood, this was not difficult. E-flite retracts help also as there are less components to be installed. The model is covered in fibreglass cloth and z-poxy finishing resin. I painted it with tamiya acrylic paint with my airbrush. There is a full build thread on rcscalebuilder.com under "other designers".
Lindsay Pucholt - 31/07/2020
Can you post a link to the build thread? We'll put a link to it direct, but I can't find it. Ah no - wait - there's no access to read any threads on that site (at all) without first creating an account and using the login? Ok, skip that. Beautiful model though.
SteveWMD - 31/07/2020
Does anybody knows where to obtain a canopy for this super aircraft?
Hans Slagter - 01/06/2022
This plan was also published in UK by RCMW so you could try Sarik hobbies in the UK.
M Hodgson - 02/06/2022
It's a damn pretty plane, so it's a pity to let it go because of a canopy. If all else fails you can mould one yourself, it's an easy procedure and doesn't take much in hardware terms. Quality depends mostly on the care you are willing to devote to the task.
This is a good description but it can be simplified if desired: https://www.instructables.com/Vacuum-Former-at-Home/
Miguel - 02/06/2022
Add a comment