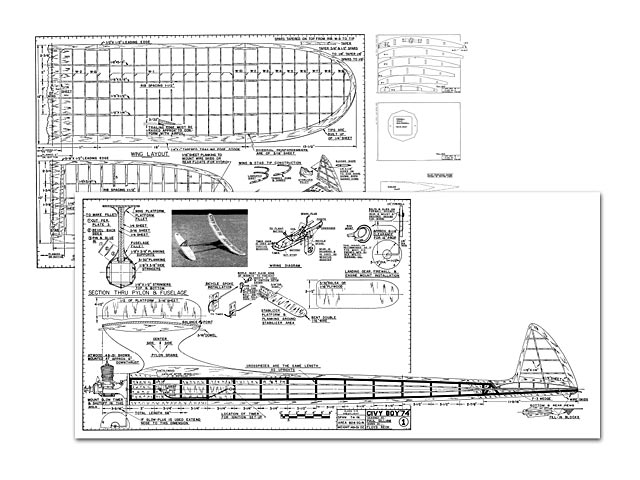 Quote: "The Civy Boy design is one of the most successful to come from California in a long time - try a 74 yourself! Civy Boy 74, by Paul Gilliam.

Foreward: The design of a good contest ship is no accident. It requires a lot of patience and determination, to say nothing of the midnight oil. Few modelers will ever know how much time went into the actual development of the Civy Boy, but it was not long after the 1947 contest season that the result of Paul Gilliam's efforts gained their just reward. Contest after contest was won by the big Civy and its future was definitely set. Since that year many Civics have been built for all the contest classes and all have proven out the original theories set forth by the design in the first basic test planes.

The long moment arm and large stab area give the Civy Boy just about the flattest glide ever seen and also the un-canny ability to ride over the top and hang on to that last foot of altitude when riding even the roughest thermals.

I should like to mention my own experience with the 74; after completing the model and installing the engine, I had the good fortune to have the designer with me for the original test flights. We went out in the evening in a dead calm and after a few test glides, crossed our fingers and wound up the engine. The time was set for 10 sec. and the model hand launched. The engine was turning almost full power (having leaned out somewhat from the normal test flight procedure), the ship screamed almost straight up, flipped out on the top, and settled into a perfect gliding circle, remaining in the air over four minutes. Since that flight, the only trouble I have had with the model is keeping it in sight. The construction of the Civy Boy 74 is by no means difficult, and the average modeler should have no trouble duplicating the original ship. In addition to the record flight of Paul's original Civy 74, the impressive record of twelve others built is as follows: eight known First Place wins, seven Second Places, five Thirds, and numerous Fourths and Fifths. BILL ATWOOD.

The idea that led to the design of the present Civy Boy was conceived in May, 1942. That year and the year before, there were few designs that could out-perform the fine Sailplane (oz1058) by Carl Goldberg. It was at this time that the author imagined a new force arrangement might do the trick. That is, a long working tail moment coupled with large per cent stabilizer, area with the model's CG being under the trailing edge of the wing. Having entered the service in June 1942, I had to shelve the idea with only meager experimenting: the infantry soldier had little or no time for model building, so it was not until 1946, when released from service, that the first model of this design took to the air. Being a civilian once more with opportunity to build and fly, the new ship was immediately tagged Civy Boy.

The sequence that seems to be the most rapid for building the Civil Boy is as follows: scale the plans to full size. The fuselage is a square box shape made from 1/4 in square balsa. It is easy to build and gets its final outline shape by the use of six stringers. Before starting to lay out the fuselage sides, splice four long pieces of 1/4 square from standard 3 ft balsa stock for the fuselage longerons. It is best to make the splices in these four longerons so that they fall in different locations in the fuselage to give greater strength. While these longeron splices are drying, construct the pylon. From sheet balsa cut the three pylon laminations. The center is 3/16 sheet with balsa grain vertical, The two outside laminations are made of 1/4 sheet, and are placed with the balsa grain diagon-ally opposite the 3/16 sheet pylon center, Cement the lami-nations well. Place the pylon on a fiat surface and pin dawn heavily until dry, or place something flat and heavy on it to insure against warps.

While the pylon is drying (and it is best to allow several hours for drying - or even over night), use the spliced 1/4 square longerons to lay out both sides of the fuselage box, building one side on top of the other to get absolute uniformity. Cut and cement in place the upright pieces of 1/4 square. Cut two identical pieces of pattern F3 from 1/4 sheet..."

Quote: "Hi Steve - Here is Paul Gilliam's Civy Boy 74 from Model Airplane News magazine issue 10-49. This is the recently posted Civy Boy 24 (oz5491)'s bigger brother. I had been working on this scan when the other one popped-up, perfect timing! Regards," 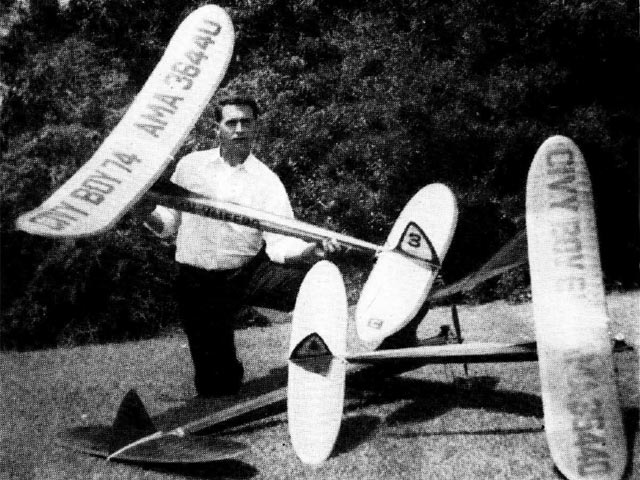