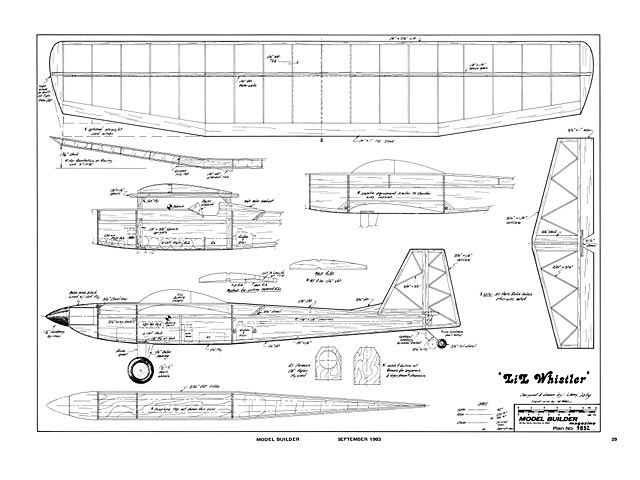 Here is Larry Jolly's Lil Whistler from Model Builder magazine issue 09-83. The plan shows both a shoulder-mounted wing and a parasol wing arrangement.

Update 15/05/2021: Added complete article and transcript, thanks to JanNovick.

Quote: "The Whistler story goes back a long time. My association with the airplane started last year when Clyde Der Taubin sent me a fuzzy photo of his father taken in the early '20s. It seems that Clyde's father was a fighter pilot during World War I; with a name like Clay Der Taubin you can bet he didn't fly for the allies.

Anyway, as history goes, the Germans got a big kick out of sending huge rigid airships over England and dropping bombs on the folk below. As things sometimes go, the Zeppelins, as they were called, had one very serious flaw, as the United States was the only source of helium, the Germans had to use hydrogen, that's right, the same as in bomb. Well, the British soon found that all they had to do was place one glowing bullet into one of a Zeppelin's gas cells, and instead of an airship the Germans soon had a glowing Chinese lantern plummeting from the sky. The Germans became very serious over these events and started working on ways to give their airships some protection. Clay and his squadron were soon involved in an experimental program involving parasitic fighters that would go with the airships on their raids and, if enemy fighters were encountered, they would be dropped from the airship, engage the enemy and return to the airship for the ride home.

Well as wars usually go, World War I got too expensive, and the Germans decided to call the whole thing off. As part of the treaty, the allies look possession of the remaining Zeppelins; these were divied up between Great Britain and the USA. As it went, the US got Clay Der Taubin and his group.

When the US found out what they had, they immediately shipped Clay off to Dayton and slapped a "Top Secret" classification over the entire program. It appears that the Germans didn't want anything flammable in or near their zeppelins. This, of course, left petrol motor powered aircraft out of the running. What the German engineers did was ingenious: in 1917 they designed an electric powered interceptor to be carried in their airships as protection. The picture Clyde sent me is of his father leaning against the wing of his personal aircraft, dubbed Whistler, Of course. By the time it got to Dayton, it had been refinished in US colors. Unfortunately, the photo is so old that it won't reproduce, but if you could view it, you would see that the mid-wing version is the spitting image of the full-size aircraft. Clyde told me that after the military tested the little German electric fighter, they decided against further study of electric flight, and his father was made a civilian advisor.

When I received the photo of the Whistler from Clyde, I knew that this was the subject for my first sort-of-scale masterpiece. The area and moments were perfect, best off, I could even use a scale power source. Plans were quickly drawn and the Whistler soon became legend in Southern California. All the versions presented here have been successfully built and flown. They have all proved easy to build and have been found to be excellent sport fliers. Although the Whistler is an electric powered model, the design is easily changed to a gas powered model for .049-.09 glow motors. Just do two things: make sure the model is fuel proofed so the fuel residue won't rot the nose off, and don't let me find out you did it.

As presented in Model Builder, the Whistler is designed to be powered with common six-cell 05 systems. My Whistlers have been flown with both Astro and Leisure systems and have rewarded me with regular eight to ten minute flights. Believe me, this is the sport electric that you have been waiting for.

PREPARATION: Now that you have decided that you want a Whistler of your own, you're going to have to build one. When scratch building, I like to make up a kit before I start construction so that I don't have to take time out from building to fabricate something. Use the drawings as a guide, and form the ribs, the fuselage sides, the formers, and the shear webs. You don't have to be too careful on wood selection, the lighter the better, but don't sacrifice strength for weight. Now is also a good time to get the hardware together. Sig makes the landing gear; you'll need as well as the small canopy if you build that version. Got everything cut? If so, then let's grab some Hot Stuff and go!

BUILDING THE WHISTLER WING: I like to build the wing first so that I can have it ready to fit to the fuselage. Look at the photos, note that the Whistler has an open structure wing with center sheeting for protection from the rubber bands. You must decide whether you will build the constant chord wing or the wing with tapered tips. If you build the tapered wing, modify the ribs using the method shown on the drawing. Also note that the three center ribs have to be trimmed to accept the center sheeting.

BUILDING THE TAIL SURFACES: Both the stab and rudder are simple, flat structures constructed with 3/16 x 1/4 balsa outlines and 3/32 x 3/16 ribs. Build both the stabilizer and the rudder over the drawing. When complete, gently sand the edges round. It is not necessary to sand an airfoil shape into the surfaces, just sand them to a pleasing contour.

BUILDING THE FUSELAGE: Lay the fuselage sides on the board bottom facing bottom. Make sure that you have them aligned; now pin in position and mark the locations of the two plywood formers. Now glue the 1/8 x 1/4 balsa longerons in position. Remove the fuselage sides from the table and pin them together, longerons to the outside. Sand the edges thus ensuring the sides are the same. Unpin the sides and taper sand the longerons at the rear so that the sides will fit together at the tail. Pin one side to the board longeron..." 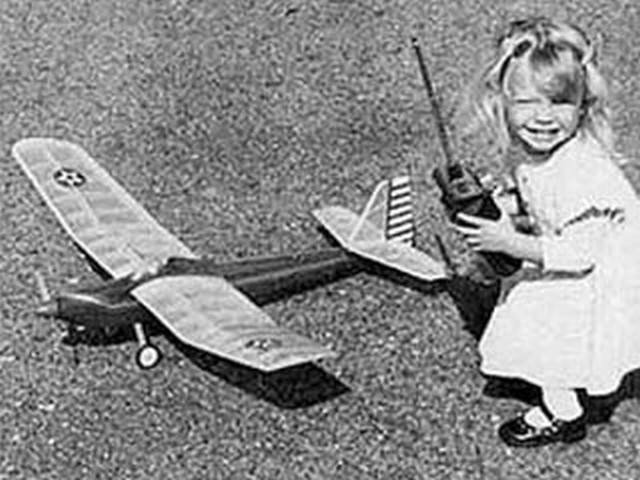