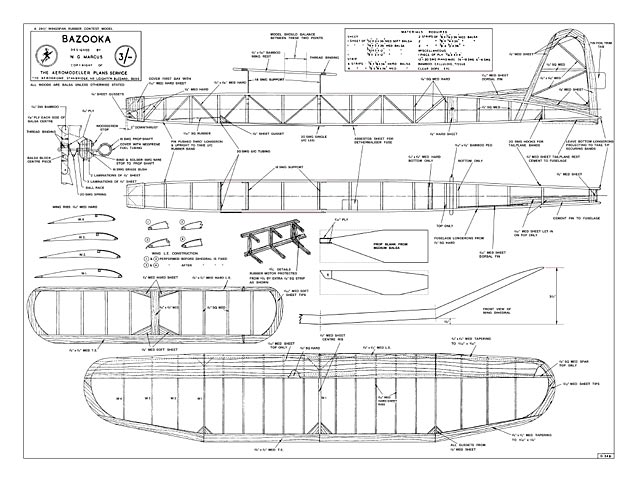 Bazooka. Rubber 29-1/2in contest model from the February 1950 issue of Aeromodeller.

Quote: "WITH the introduction of the present FAI rules during 1948, a new type of rubber model design for competition work was indicated. Fortunately, these rules showed some foresight in the actual layout of the model. but, for rubber models of small dimensions at least, they also imposed a rather heavy weight loading Large models, of the Wakefield type, may be superior, but they are too expensive, and take too long to build, for continuous competition work.

In 'Bazooka' we have the type of job that would previously have been rejected on appearance alone. The writer, however, succeeded in astounding certain London Area critics with the model's amazing climb - superior to many 'hot' duration gas models A study of its brief flight record should convince most that the model definitely has possibilities.

The wing and tail areas were kept as small as was thought possible, so as to keep the total weight down to a minimum. Now for the competition details, which are few as the model has only been flown in three competitions to date. The actual flight times are as follows: 1949 Flight Cup: 5 min 76 sec, 3 min 40 ses. Model Aircraft Cup: 2 min 53 sec, 5 min+, 5 min+. Farrow Shield: 1 min 30 sec, 5 min+, 5 min+.

Both the under 2 minute flights were due to inferior or fatigued rubber. The second flight at the Nationals was the cause of considerable controversy: the model flew OOS. for just over 5 mins. (the actual timekeepers and various witnesses can verify this) but the flight was recorded as 56 secs! Nuff said! Anyway, it was not the model's fault that it did not win the Trophy!

These flights average at over three and a half minutes which is up to the best contest standard.

The Model. As usual, in the writer's designs, the construction is essentially simple, being easy to build and more important, easy to repair. The fuselage has diagonal bracing so as to relieve the covering of some of the torsional strain due to the large motor. The top longerons at the tail should be steamed to shape before pinning in position on the plan. The covering on the original fuselage was red Bamboo paper, but the Burmese tissue available would be excellent. The Burmese should preferably be sprayed with thinned coloured dope, after shrinking, so as to aid visibility.

The wing should present no problem. A good method of doing the sheeting is to cement the edge of a piece of 1/32 in. sheet (cut slightly over-length) to the top of the mainspar, fix with pins (small) and let it dry. Now cement the top of the ribs from underneath and the leading edge. Bend the sheet over, and allow to set whilst fixed by pins. Trim surplus sheet away when pins have been removed and sand to the desired section.

The tailplane and fin assembly are self-explanatory. Note that the fin is cemented to the port longerons of the fuselage. Cover all flying surfaces with Jap tissue, water spray and dope with discretion.

The propellor may seem a trifle large for the model, but it must be remembered that it has to absorb a large amount of power from the rubber motor. A smaller propeller would result in a very short and inefficient power run. The blades should be carved from even-grained medium block, to maximum thickness of 1/8 in (except near hub, of course) with a maximum undercamber of 1/16 in..."

Note this plan has been scaled up to full size from the original magazine print (1/4 scale) thus has a noisy background, so if anyone out there has the skill and time needed to remove the background pattern, feel free to send in a cleaner copy.

Update 07/12/2015: Replaced this plan with a clearer copy (patterned background removed) thanks to TonyP. 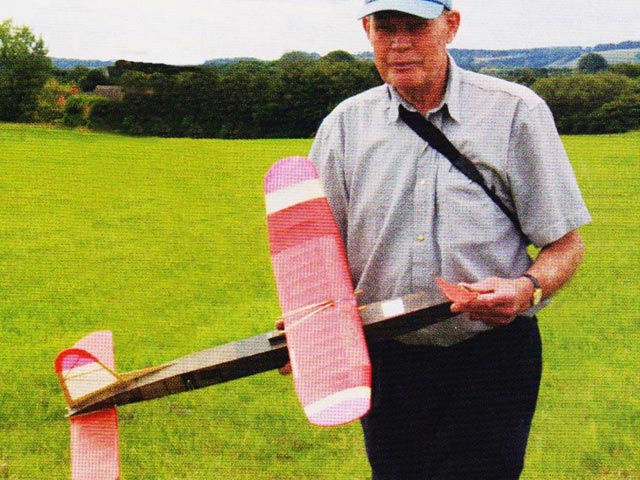