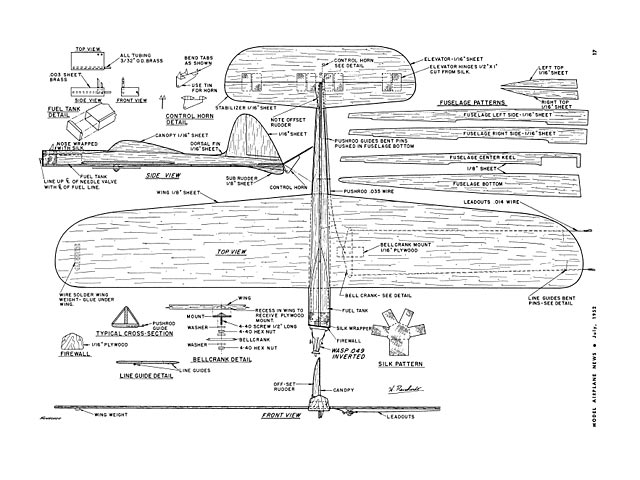 Update 14/05/2014: Re-scaled this plan to full-size at 29.5in span, thanks to TomHampshire for confirming the wingspan.

Update: Changed again. Re-scaled this plan to full-size at 26in span, thanks to theshadow (and the AMA) for confirming the wingspan at 26in.

Quote: "1952 was a busy year for Red. His third design article that year was about the Snapper, ad was published in the July 1952 Model Airplane News. Red went back to 1/2A power for this fun airplane, and used probably the hottest engine at the time: a Wasp .049. With the additional power available, Red made the aircraft larger, with a 26-inch span, and flew it on longer 30-foot-long .010 wire lines. He built the wing from 1/8 balsa sheet, knowing that it would flex during flight, but he felt that there was no danger of it failing..."

Quote: "The Snapper, by Harold Reinhardt. Small engine fans with yen to stunt should run, not walk, to nearest hobby shop for balsa, cement, to make this wild and woolly plane.

A new theory was tried on this airplane. Everybody knows that an airplane with dihedral is more stable. Since a stunt ship has to fly through outside as well as inside maneuvers, extreme dihedral seemed impractical, so the airplane was designed to have bending wings, giving it dihedral in all positions.

Sheet balsa construction made this possible. The wing will flex upward under a looping load, or downward under an outside loop loading. While this is spectacular to look at - so those on the outside of the circle have told me - there is absolutely no danger of the wings folding.

Construction is almost self-explanatory. Start by cutting all the parts from plans. Sand wing and tail assemblies, and cement the elevator hinges in place. Make or buy a suitable tank and mount it on the fuselage bottom. Add the wing and tail assemblies, and add the fuselage vertical keel. Cement the mounting nuts to the back of the firewall, and mount it on the front of the fuselage. Next come the side and top sheeting, canopy outline, and rudder. Cement the bellcrank mount and control horn in place. Cement the silk around the firewall and add wing weight to counterbalance the weight of the lines.

The ship is now ready for finishing. Sand all surfaces with fine sandpaper. Apply two coats of sanding sealer, one coat of clear dope, and a coat of hot fuel proofer of your own choice. If you use Sta, be sure to use it from filler to finish. Fly the ship on 20 or 30 feet of .010 line, de-pending on wind conditions. Landing gear is not necessary.

A Wasp .049 engine is used, mounted inverted. Don't worry about the engine sticking out of the bottom of the airplane. The plane lands like a feather, and the engine starts easier."

Alternate version of the same plan, but scaled diferently. Since sources quote the span at both 26in and at 29.5in, here is a 2nd version at 29.5in.
Article. 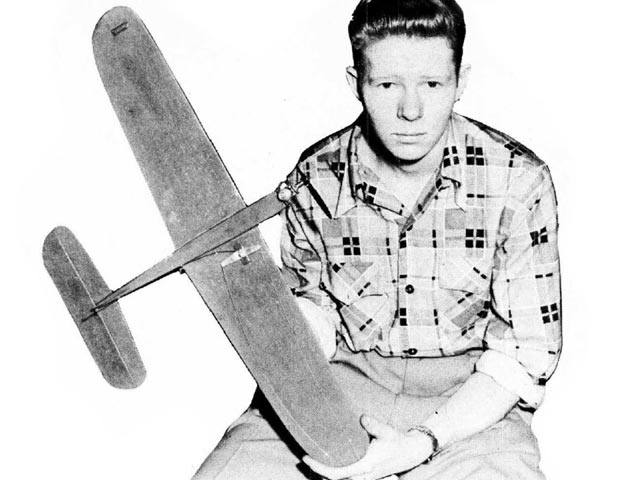 This is a surprisingly good performer, with the engine out-thrust shown one of its secrets to success. Will fly well with Atwood Wasp engine, but better with McCoy 049 diesel in my experience. 35 feet 8 thou lines - vintage stunt pattern then possible.
Maris Dislers - 20/05/2020
Add a comment