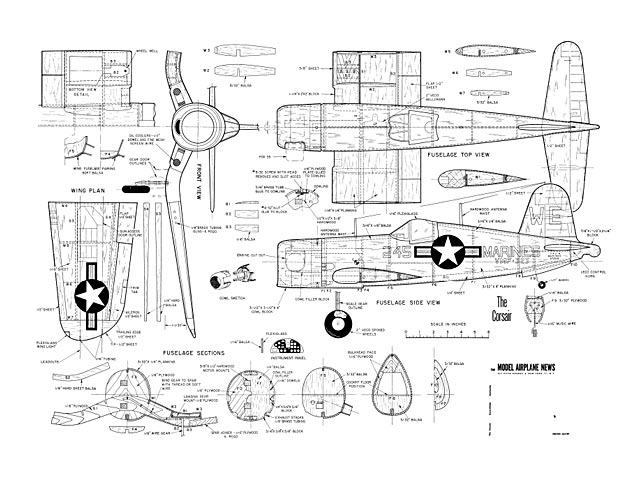 Quote: "Chance Vought's famed 'bent-wing bird' here makes a tremendous flier, and yet has a resplendent paint job. A good .29 to .35 does trick. Corsair, by ER Atkins.

Consider the amazing combat record compiled during World War by the famous Chance Vought F4U Corsair: 2,140 enemy aircraft destroyed against a loss of 189! One of the most rugged fighters ever built, with speeds in excess of 400 knots, the Corsair was able to carry up to 4,000 lbs of bombs. From 1938 through 1950, 12,571 Corsairs were produced for the Navy. This is the longest period any combat airplane has ever been in continuous production. In addition, many were produced for the French Navy and are still in operation.

We have chosen for our model the F4U-4, which saw action in WW II and in Korea. The markings for our model are from Marine fighter squadron 32 which served aboard the Carrier Baedong Strait in Korea.

Construction of the fuselage is begun by cutting formers F-2, F-3, and S-1 spar from 1/8 in plywood. F-4 through F-10 are 3/32 in balsa except F-9 which is 3/32 plywood. Make the seat bulkhead facing from 1/16 plywood and cement to F-6. Be sure to mark the horizontal and vertical center lines on the parts before cutting them out as this will give an alingment reference when the fuselage is assembled.

Cement S-1 to F-3 with Weldwood glue taking particular care to aline them properly. This is important so that the wing may be properly positioned. Drill the 1/16 hole for landing gear attachment..." 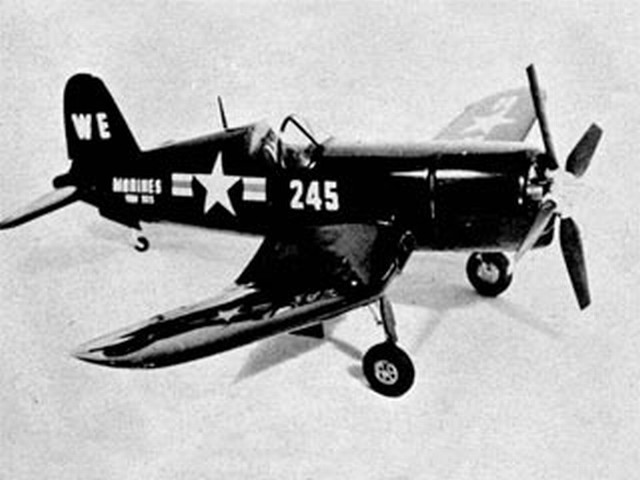