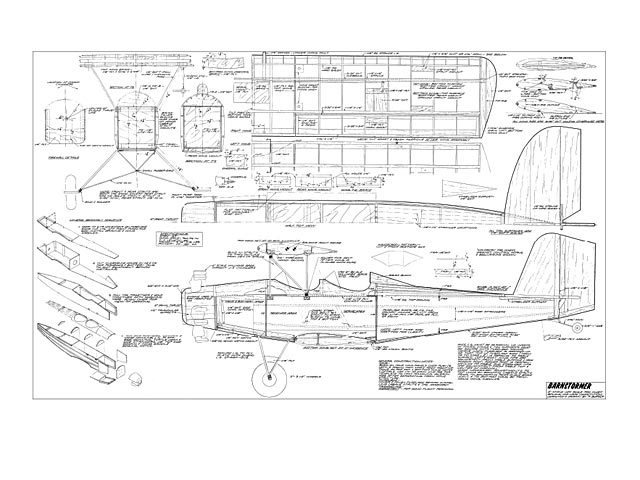 Quote: "Barnstormer. 1930 Fleet Biplane, by Romey Bukolt. Sport scale version of a very popular biplane from the 1930's era. An easy model to scratch build, and even easier in the kit soon to be released. See the ad elsewhere in this issue.

I consider myself fortunate to be old enough to remember an era before television, jet planes, and mini-skirts, when it was commonplace to spend a lazy summer afternoon out at the local air patch a mile or so east of town, watching a familiar red biplane performing an aerial ballet of loops, Immelmans, Cuban eights, and spins, in one continuous strand of imaginary yarn tossed freely across the deep blue sky.

The plane was a 1930 Fleet Biplane, powered by a five cylinder radial engine, and dressed in bright red fabric, which was accented by large white letters and numbers on the wings. It belonged to an old barnstormer who earned his wings during World War I. He flew every chance he could get, and spent his weekends picking up enough money to pay for his gas and oil by giving the more carefree townfolk a $3.00 birdseye view of the courthouse, river, and water tower. These are among my fondest childhood memories.

Now, all you biplane nuts, who cherish similar moments, and even you younger 'Double winger' enthusiasts, whose only exposure to barnstorming comes from the current film, 'The Great Waldo Pepper,' have the opportunity to recount those memorable days. The National Sport Pattern Association was formed for you people. Its objective is to duplicate full scale aerobatics in a realistic manner with models which are realistic replicas of biplanes that have been built and flown. The idea is to get away from the slick, crisp, high speed, unreal pattern maneuver of the precision hi-speed, hi-performance pattern ship, and recount the nostalgic days of the smooth, easy-going graceful airshow sequence.

In contrast to the racy Aerornasters, Pitts Specials, Acro-Sports and Acro-Stars, we bring you the 'Barnstormer,' a stand-off scale model of the vintage 1930 Fleet Biplane.

The Fleet, named after a Major Reuben Fleet, was an outgrowth of the Consolidated Aircraft Company, under the direction of Lawrence D Bell, who later was to gain fame as the founder of Bell Aircraft. The first model was granted ATC No.122, in May 1929. Some instability was found in the earliest mod-els, but was corrected with changes in fin and rudder area. Several models were fitted with the five cylinder radial Kinner K5 engine. The Model 8 had a wide fuselage to accommodate three people, The model 10 carried a DH Gypsy Major engine for overseas use. A Fleet factory was built in Ontario, Canada and a winterized version was built there with an enclosed cockpit. The RCAF version was called the Fleet Fawn, and the civilian version was called the Fleet Finch.

In 1930, the famous movies stunt pilot Paul Maritz broke the record for consecutive outside loops by executing, 49 in a Fleet, however the judges discounted three because they claimed he lost heading on them.

A number of Fleet Bipes are still in operation in the hands of collectors, and can sometimesbe seen at Antique Fly-ins or perhaps at the big FAA fly-in at Oshkosh each summer.

The Barnstormer has a number of features designed into it to make it an easy-to-build, easy-to-fly, nearly fool-proof aircraft. I say 'nearly' because I know of modelers who can begin with an ARF airplane kit and end up with a locomotive. I do not claim credit for this design in its entirety. Many of the features are tried and proven, such as the Ugly Stick (oz5175) wing assembly and the Acro-Star (oz6256) cabane struts.

The fuselage I basically built around a box made up of two fuselage sides, the F-2 and F-3 formers, and the cockpit floor. The tail surfaces are simple sheet construction, with no complicated compound curves at the base of the fin. All four wing panels are basically identical in span and chord, and rib spacing, and are constructed in the same manner, with minor modifications made after the basic construction is complete. All the ribs are cut from one template, and the wing requires no bent sheeting or rib capstrips.

PRIOR TO CONSTRUCTION: At the end of the text you will find a complete list of materials required for construction of the Barnstormer. While every scratch builder has his own pet way of doing things, I'll suggest the sequence of steps I followed to get the model together quickly and easily, and you can take it for what it's worth.

First of all, I like to cut out all or nearly all the parts, so that in effect, I can then, begin with a 'kit.' A most valuable asset to transfering shapes from the drawing to the wood is a large sheet of acetate plastic (frosted on at least one side) of .005 to .10 thickness, found in most stationery or art supplies stores. Lay the plastic over the part, trace the outline, scoring the sheet with a sharp Uber Skiver knife, bend on the score mark, and the plastic template will snap out of the sheet. Trace around the template on the wood, using a fineline point pen such as the yellow barreled 'Bic' pen. Simple and quick, it saves the plan and provides a reusable template for duplication of pieces, should you need to replace damaged parts or want to build another model.

Some of the parts are cut from standard dimension stick stock and others, such as the formers, are dimensioned so that they can be drawn on the wood using a ruler, triangle, and a compass. If you own a handsaw or a Dremel saw you can stack cut a number of ribs at a time.

The model requires twenty 1/8 x 1/4 hard balsa or spruce sticks for wing spars and fuselage stringers. What you use is up to you, but balsa is generally cheaper and easier to came by and with shear webbing between the main spars..." 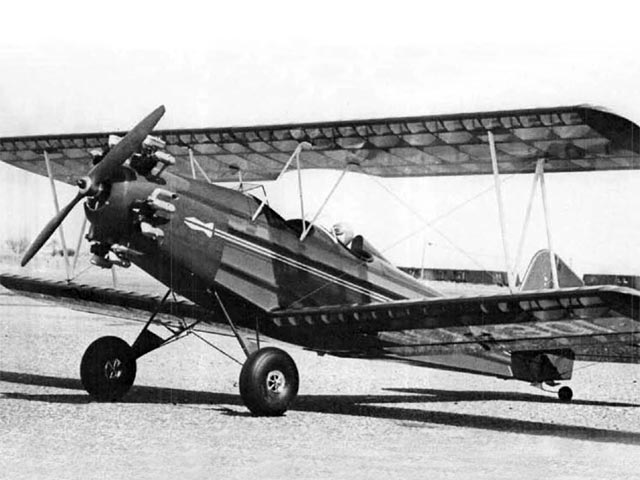