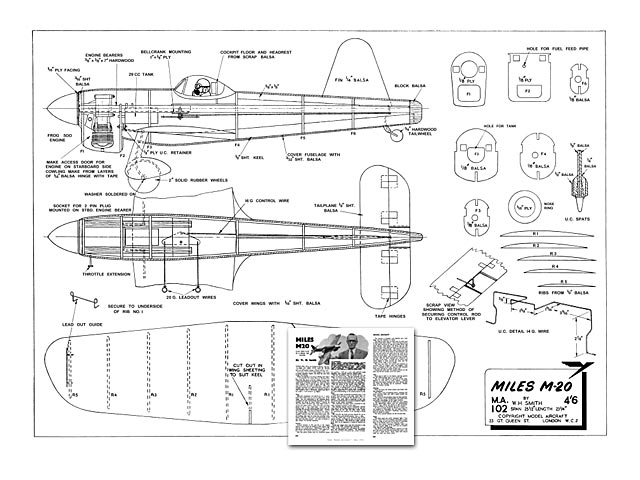 The Miles M-20 was designed during 1940 as a single seat fighter which could be speedily built in huge quantities to take the place of front line aircraft, should supplies of these ever run out.

As a team racer it is an ideal design as the motor is totally enclosed without the need for any extra lumps and bumps.

When circulating it is a joy to behold, and with a 9x8 propellor and using Mercury Racing Glow Plug fuel, the speed is in the region of 70 mph. It says something for the strength of this design that, while flying at Fairlop recently, the writer (Clumsy Clot) tripped over a tuft of grass and the M-20 nose-dived into the deck at full bore. The only damage sustained was a splintered port wing and a cracked spat, both of which were speedily repaired. The model is now in circulation again and has so far made a total of about 35 flights.

Wing. Butt join lengthwise two sheets of 4 in x 1/16 in hard sheet balsa, and cut out one plan view of the wing. Cut two small hales in the positions shown and push the wire undercarriage through so that the crossbar lies along the inner surface. Cement all ribs into place and bevel the wing edges ready to receive the upper surface.

Now butt join two more pieces of 4 in x 1/16 in hard balsa. Cut slots in the leading edge to take undercarriage frame and pin down flat on the edge of the building board. Cement the leading edge of the bottom half of the wing to the upper surface, pin down and leave to dry thoroughly. Remove from the board and repeat with the trailing edge and the wing tips..." 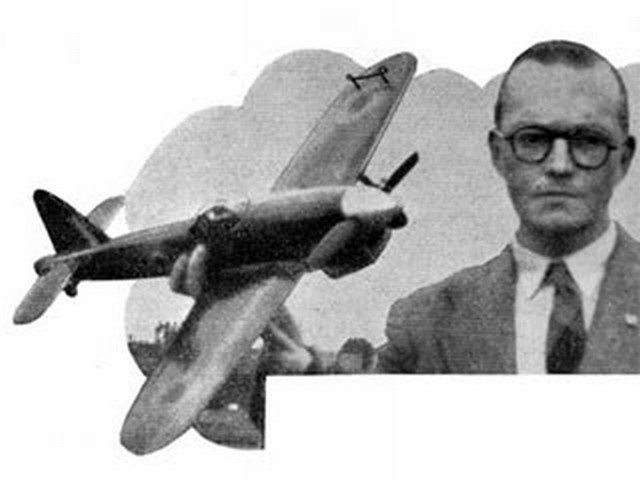