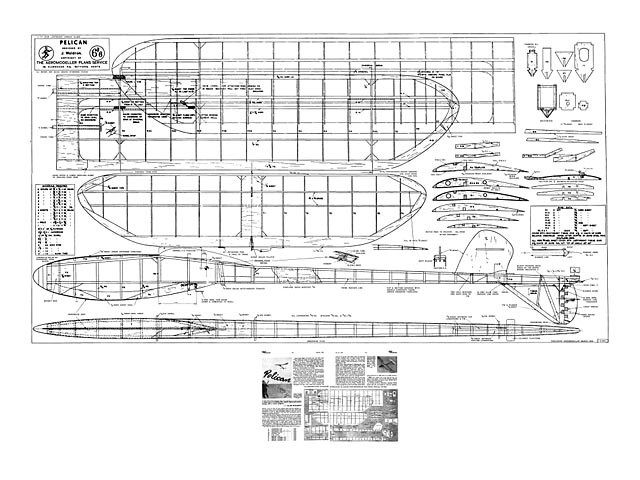 Pelican. 72in wingspan glider by Jim Waldron from Aeromodeller March 1956.

Quote: "Pelican, by Jim Waldron. If you have never placed high in a contest you will stand a chance now by building this simple high-performance design with a contest pedigree.

WHEN A DESIGN enters its sixth contest season and still continues to win major events, it can be acknowledged as top of its class. Such is the qualification of this 6 ft span lightweight sailplane which has so often brought the names of the Henley Club fliers into the leading places at national and club gala contests.

The prototype was first flown in 1949 and since then has been highly developed by designer Jim Waldron through no less than ten versions. Seven of these were built by clubmates said construction was simplified to that it can now be offered as a contest winner suitable for even the raw novice. In fact, it has been a 'first' glider for several members of the Henley Club, notably that of Dave Painter, winner of the Thurston Cup at the British Nationals 1955. In open glider contests its advantage over A/2 gliders is apparent, not the least virtue being its larger size which enables it to stay in sight longer, while it is not of giant proportions and breaks down into convenient components for easy transport.

For those not familiar with the trail of success, here is its record (see table).-

Also several flights of over 15 min have been made and one flight of 23 min by Tony Cooke's model.

The technically-minded will appreciate that the wing area is 4-1/2 sq ft, to which should be added another 200 sq in of tailplane, and yet the total weight is only 15-16 oz. Wing section is Isacson 64009, and designer Waktron employs the best effective wing chord of 9 in to make full use of the light loading. Thus the aspect ratio is moderate, and the increased airfoil efficiency produces a commendable rato of sink.

To make the model non-critical on towhook positioning and easy to launch for the beginner, there is adequate forward keel area, and we have seen Jim demonstrate a 'one-handed launch' in quite a strong wind by flying the model as though it were a kite.

With so much to recommend it, Pelican is bound to be a most popular design among the contest-minded, and the full-size drawing will be found to be complete in itself without need for extra instruction.

Jim passess on one covering note in that one should not attempt to attach the tissue to the underside of the wing ribs with paste. Thick dope or tissue cement is far better, and helps to retain a smooth undercamber throughout the span. One should also remember that..." 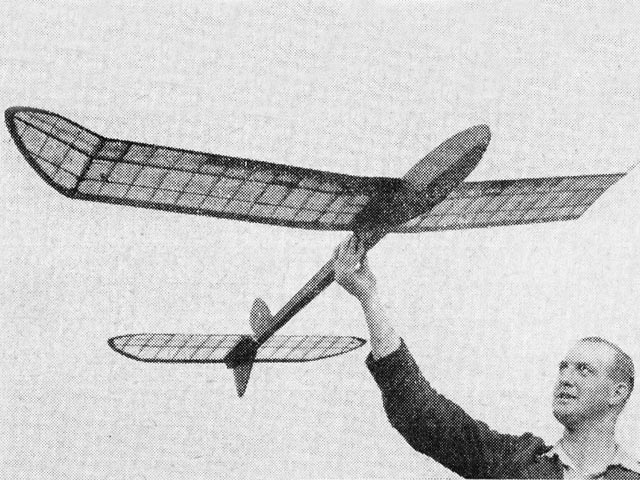 Steve, Jim Waldron here. I was 19 when I designed Pelican glider, in 1949, then doing National Service at RAF Medmenham. Later, was Hon.Sec. of the Henley Model Club. We shared Chalgrove airfield with Martin-Baker of Ejection Seat fame, and saw aviation history being made. James Martin gave us written permission to share the airfield. It was the perfect place to fly Pelican yet we still used to fly out of the mile & a half long runway's on windy contest day's! Dave Painter won the British National's at Waterbeach one year, and I was 2nd at same event. I also won the 'Open Glider' event at Northern Height's Gala Day with it on one occasion, at the old Hawker Airfield at Langley in Bucks. Near Slough. Best wishes,
JimWaldron - 25/02/2015
Steve, Jim Waldron here, a correction to my earlier comments. I was 3rd at Waterbeach when Dave Painter was 1st. Sorry! Another of our 'Henley Model Club' member's who used Pelican was 1st on another occasion at the "Northern Height's. Gala" at Langley, using this model.! Patrick Larcey later went to Radlett, worked for Handley-Pages, learned to fly Glider's and obtained his PPL. Became Flight Crew Observer' on Victor' bomber's when they used to fly supersonic over the Wash. A little known fact, which no other 'V-Bomber could achieve. When HP's closed he joined Government Aircraft Corporation in Australia, and did similar work on the Nomad twin turbo-prop Bush Aircraft'. Me, I wrote articles in the "Aeromodellor" and it's Annnual, as well as working at Fairey Aviation, on the "Gannett" and record-breaking FD2. Regards,
JimWaldron - 03/03/2015
Add a comment