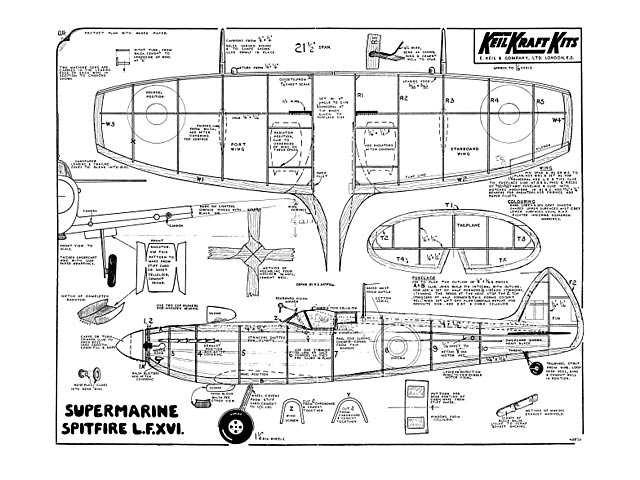 Quote: "Hi Steve, Here's another plan from the early Keil Kraft 1/18 scale series. A month or so after publishing Doug McHard's original 1997 article concerning these 'missing' plans Aeromodeller printed a letter from him stating that he had received a few more examples through the post in response to his appeal. The clipped-wing Spitfire LFXVI plan was one, and a small version was reproduced along with Doug's letter. I've enlarged it and replaced most of the handwritten text. Some of the lines are a little 'jaggy' but it's perfectly buildable, although a few formers will be required. Doug, of course, was able to inspect the original plan and he wrote that it was dated August 1945, which fits well enough with the fact that this range first went on sale in 1946. At that time, Keil Kraft was a small firm operating from Hackney Road, London (it moved to Wickford in Essex in the 1950s). The owner, Eddie Keil, worked on the De Havilland Mosquito production line during WW2. Incidentally, I believe Doug McHard's extensive collection of old plans was sold at auction in April 2003 after his death, so it is scattered to the four winds now. Perhaps we can reassemble what he had via Outerzone? In the 1997 article he refers to a Mitsubishi Zero and a Republic Thunderbolt being in his possession, so they are definitely out there somewhere. Regards,"

Update 16/07/2014: Replaced this plan with a more detailed copy, thanks to GuyColeman. Ok, here's where it starts to get complicated. Have moved the prior version of the plan (thanks, Stuart) across to become a supplement file, no doubt useful for comparison. This new version is at higher resolution and is clearer (yay!) but it seems has also been pencilled over in some places (boo!) but the pencil-wielder, it seems, was none other than Doug McHard (yay!) who made it harder to see the original plan outlines in some places (boo!) but has improved the scale outline greatly, particularly around the cockpit and fuselage rear (yay!) Also he has drawn out the wing rib formers and two sets of fuselage formers, both for the original fuselage shape and for his own improved fuselage shape (double yay!).

Quote: "Dear Steve, Many thanks for your excellent website. I notice you have a scan of this Albert Hatfull designed Spitfire LFXVI. Here is a better copy of it, with modifications drawn in, I believe, by Doug McHard. Here, too, are Mr. McHard's formers both for his modified fuselage and those to match Mr. Hatfull's original design, as well as the correct rib patterns." 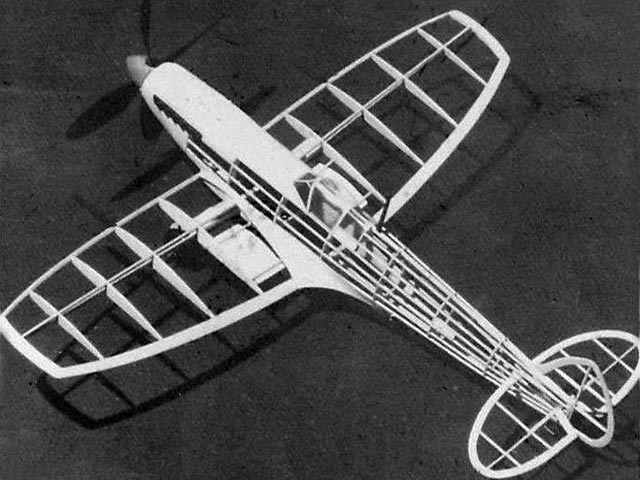 Hello Steve, Wow, great find - gold dust! As many will know, Doug was 'Mr Scale' and always strove to achieve a high degree of realism in his finished models. He described his approach in Aeromodeller, when building the Aeromodels Boulton Paul Defiant kit (another 'missing' plan). He rarely built any model straight out-of-the-box and always updated old structures to suit his preferred methods, but he would use as many pieces of the old kit as possible to preserve its vintage credentials, so long as that didn't compromise its strength and scale outline. For the Spit XVI he has merely raised the top line of the profile and adjusted the fin to suit. The result is a much nicer Spit model, in my view. Wonder if he ever built it? Regards,
StuartBurling - 17/07/2014
Dear Steve, Thank you for putting up the drawings. You have restored them very carefully indeed. Stuart Burling asks if Doug McMard actually built it. I believe he did. Here is a photo [model pic]. Kind regards,
GuyColeman - 19/07/2014
As well as buying Doug's Spitfire 1 at the RAF Museum auction, I also bought his Astral Beaufighter, a couple of 109s and the Hatful Zero. They are all carefully stored in boxes although I have flown the Zero. I am particularly keen to build the Typhoon which appeared on the cover of the Aeromodeller. I believe Ron Moulton was presented with the original. [Note: Richard is the designer of the 1985 Aeromodeller P38 Lightning, oz 2983.]
RichardFalconer - 21/06/2018
Add a comment