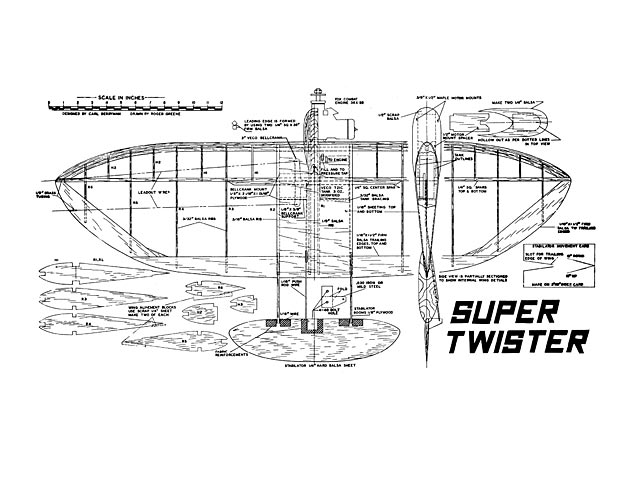 Quote: "I know that most of the U-control flyers have heard the free-flight boys make the statement: Anything will fly if you put lines on it and whip hard enough. In a sense they are right. A rock on the end of a string shows this. But, to perform the job properly, even a combat job must obey the laws of aerodynamics. Fellas - here are the facts. The airfoil must be efficient at all speeds and not create too much drag at maximum lift. If you have a high drag-lift coefficient, the plane will slow excessively in turns. Also, the wing loading must not be too high. If it is, the model will not turn quickly and smoothly. I find that 1oz per 15 to 20 sq in loading works very well with a good airfoil.

The line rake must be just right so the plane will not wobble or come in on the lines. The stabilator movement must be just enough to get maximum turn from the wing at a given CG location, or else the wing or stabilator will stall and slow the plane. Preferably the stabilator should have an airfoil similar to the wing; they work together better if it does.

All of the laws of aerodynamics must be obeyed in order to get a good performing u-control plane. And, as we put all these things together, we strive for an eye-catching appeal also. I was thinking of appearance and performance when I designed this plane.

The semi-elliptical configuration gives this plane a nice look and yet all the little forces inside work together to give a good performance. The airfoil is graduated from 18% center to 20% at the tips to prevent tip stall and wobbling around in maneuvers. The wing is of equal length inside and outside to give a flat turn so as not to lose lift. The Super Twister goes together easy, looks good, flies well.

This model should be built from medium hard balsa. I don't recommend soft balsa. This plane comes out pretty light, anyway.

First, cut out all rib templates. Probably the easiest way to keep everything lined up is to put the top view of plans on building board and wax paper over the plans. Cut the trailing edge pieces to shape shown and glue together and pin on plan..." 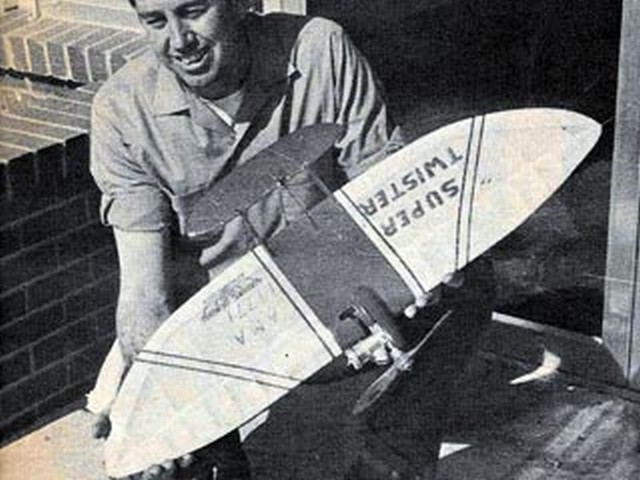