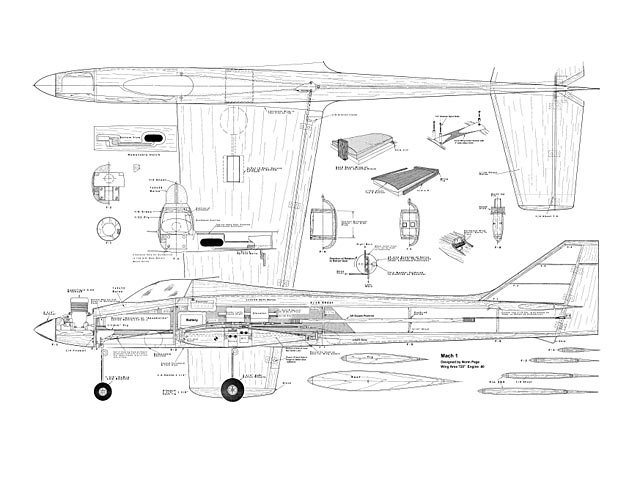 Quote: "Model Airplane News continues its Parade of Champions with this latest entrant in the contest arena - imagine a plane that can win the Masters, Tangerine and Southwestern Champs in the short period of five months!

I don't know how much 'master-minding' really went into the design of the Mach 1, but I like to think that maybe a little bit did, anyway, especially in view of its contest performance record over the last couple of years. Since its introduction in the spring of 1971, it has placed first in nearly every sanctioned contest entered. Of the 12 contests entered during 1971, there were ten firsts, one second and one fourth. Since the end of 1971, the record is a little better. All contests entered were won except one, the Nats, where it placed fourth as it did the year before. Of course, the best win to date was the 1972 Masters in Huntsville, where the US FAI Team was selected. This win, I suppose, required what one might call a little bit of masterminding.

At first glance, the Mach I might look like a conventional design. However, closer examination will reveal several departures from the usual Pattern shop used today. The fuselage is 57in long and the wing area is 715 sq in, and that I think you'll agree is a large airplane in anybody's book! As a comparison, the average Pattern ship used at the Huntsville Masters contest had a fuselage length of 50 in and a wing area of 674 sq in.

Another departure from the usual is the relatively high taper ratio of the wing, nearly 2:1. Again, the average Pattern ship used today rarely exceeds 1.5:1. In addition, the Mach 1 has a wing which has a nearly straight leading edge. The only other Pattern ship around which sports a somewhat straight leading edge is Phil Kraft's Kwik Fli (oz6526). Also the low aspect ratio of the Mach 1 is fairly unusual. For an area of 715 sq in, 62 in is not very much span.

Probably the most important general characteristic is smoothness of flight. If you are using a design which exhibits smoothness of flight, then you can go on and achieve gracefulness in your pattern. Smoothness and gracefulness together are two things that the judges are looking for in every one of the maneuvers. Next to smoothness of flight, predictability is probably the second most desirable characteristic. The ability of an airplane to behave the swine flight after flight is a valuable and indispensable asset. Predictability adds greatly to the potential of achieving precision and consistency in the per-formance of your maneuvers. Smooth-ness and predictability, to a certain extent, tend to go hand in hand. You achieve one and you tend to get the other.

Another general characteristic impor-tant to have is for the design not to be too critical, 'critical' in the sense that its performance will be sensitive to a mediocre engine run, for instance, or to the setting of the trims should they be off just a little, or to your timing should it be off a bit, for some reason or other, or to the CG placement such that the weight of the fuel burned off during the flight seriously affects its flight charac-eristics, etc. Smoothness of flight and predictability without being critical, which leads to gracefulness and preci-sion in the performance of your pattern, are essential to a good competitive airplane design.

So much for the general performance characteristics. Let's now take a look at some of the specific performance characteristics. They're less obvious and a bit more interesting to discuss. For a couple of reasons, the ability to perform good rolls was one of the primary performance considerations in the design of the Mach 1. If you look at the distribution of the K factor points for the various FA1 Pattern maneuvers, you'll notice that of the six most difficult maneuvers with the higher K factor (15 points), half of them are rolling, one looping and the other two are combinations of the two. I think it's pretty apparent that there is quite a bit of emphasis on the rolling maneuvers. At least, they are apparently considered to be somewhat more difficult than the rest.

In addition, I've noticed that over the years there has been and still is, to a certain extent, a real lack of skill in the general performance of the slow and four point roll. I feel this is primarily a result of Pattern ship designs which generally handicap the flyer in the execution of these maneuvers.

The problem centers around the interaction of top rudder with the roll rate or, in the case of the four point roll, where it interferes with holding the vertical points. Because of this interaction of controls, you see a lot of flyers doing slow and four point rolls using little or no top rudder and compensating with extra up and down elevator when the wings are more or less level. This, of course, causes the airplace to deviate from a level straight path, which, ac-cording to the rule book, is a basis for downgrading.

Moreover, in an effort to minimize these deviations, the maneuver is often performed quite rapidly, making it look quick and somewhat lacking in gracefulness. This interaction of the rudder with the roll is a flight characteristic which I feel is intolerable if you are not to be handicapped by the design you are using in competition.

Another area of concern in the de-sign of the Mach 1 was the stall charac-teristic, particularly as it pertains to spin entries. Here again, I've noticed over the years that there has generally been a real lack of skill in the execution of spin entries. It seems as though the only thing anyone is interested in these days is the spin exit heading. As a result, you see a lot of extremely sloppy spin entries.

The problem centers around the ability of the airplace to stall without dropping a wing. A lot of designs which have a tendency to top stall won't do this consistently. And if you haven't noticed, this is a requirement in the performance of the spin maneuver. The rule book, under the description for that maneuver, says the airplane 'pulls up into a stall and commences the spin.' It doesn't say the airplane 'snap-rolls out of a nose high attitude into a spin,' which is the way you see it done by a lot of flyers. As a matter of fact, at the judges' checkout and briefing at the World Championships in Doylestown..." 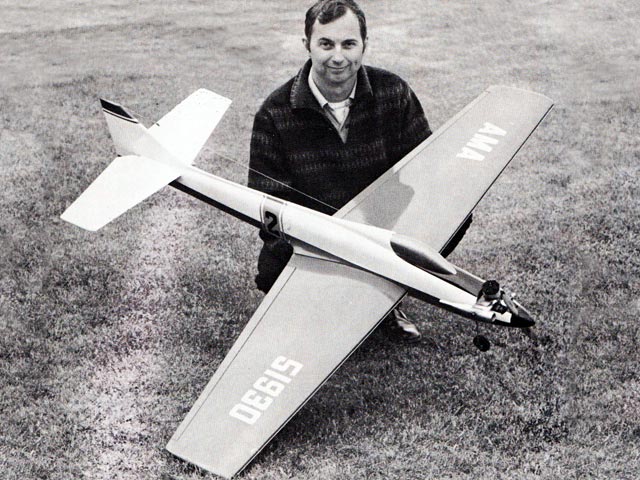