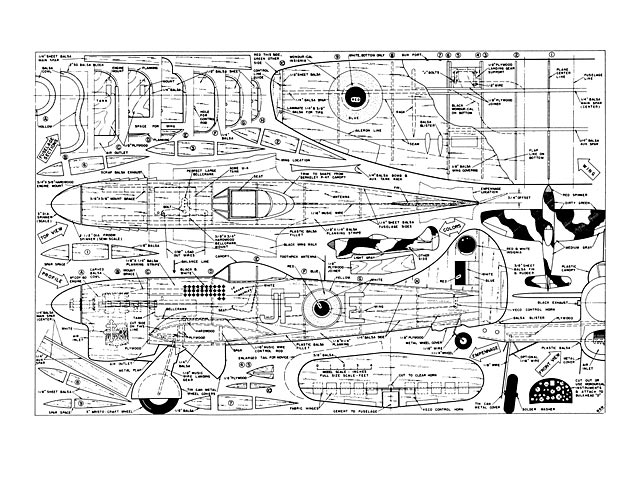 Colour scheme and markings shown are for the aircraft flown by the French WWII Ace Pierre Clostermann.

During the latter part of World War Two, French Ace Pierre Clostermann flew the rugged Hawker Tempest V which made its appearance at the front in April 1944. A development of the earlier, and not too successful Typhoon, the Tempest was a vastly superior airplane. Designed by Sidney Camm of Hurricane fame, the 'V' was the only variation to be employed operationally during the war.

This Hawker, the fastest medium-altitude fighter in the Royal Air Force, had a speed of 435 mph hour at 17,000 feet. This coupled with the four 20-millimeter wing cannon made the Tempest the mainstay of England's defense against Germany's V-1 jet powered 'buzz' bombs. This type of aircraft accounted for more than one third of the 1,800 buzz bombs destroyed during the summer of 1944.

In addition to its cannon; two 1,000 lb bombs or eight rockets could be carried as offensive armanent. Powering this large 13,500 lb plane was Napier's unique Sabre 24-cylinder, 'H' type, horizontal liquid cooled, sleeve valve design which developed 2,400 hp. Range for the Tempest V of 820 miles could be extended via two drop tanks to 1,300 miles. Altitude of 10,000 feet could be reached in 2.7 minutes.

Versatile Tempests were employed as interceptors, fighter-bombers, escorts, and for ground-attack duties against tanks and stationary targets. Carbon-monoxide fumes which seeped into the cockpit dictated the use of oxygen at all times.

Our plans are scaled one-inch-to-the-foot to produce a model for powering with an engine from .29 to 60 cubic inch displacement.

Construction begins as follows: Cut fuselage sides from 1/4 in sheet balsa, bulkheads from specified material. Bevel inboard surface of sides at rear (shown in top view) and cement sides together at this point - hold with pins or clamps until dry. Cement bulkheads in place between two sides, set aside to dry. Cut engine mounts, slip through bulkheads, cement well. The brace is required only if engine mount is cut away as shown for fuel tank and a .45 or larger engine. Apply several coats of cement around engine mount attachment.

Cut sheet balsa elevator and stabilizer. Join elevator halves by control horn or hardwood spar. Hinge elevator assembly to stabilizer, cement stab into fuselage slot. It is important to cut away portion of inner surface of each fuselage side to insure adequate freedom of move-ment of control horn.

Commercial bellcrank bolts to piece of engine mount material which is then well cemented to both fuselage sides. Cut control rod to length and slide through small holes in bulkheads. Using long nose pliers bend both ends of wire to fit through horn and bellcrank. Slip bent ends into respective holes, solder washers to ends. The bulkhead small holes act as guides to keep control rod from bending when 'up' elevator is applied.

Any standard fuel tank should fit - this item is installed. It may be necessary to trim away some of the engine mount to accommodate a tank of sufficient capacity for your engine. Secure tank with straps or wedges, plus balsa braces an ample cement. Add filling, vent, and fue line plastic tubing. Tape its open end to keep tank clean.

Acknowledgement: The author expresses sincere appreciation to Mr AE Ferko for his kind assistance which made this article possible."