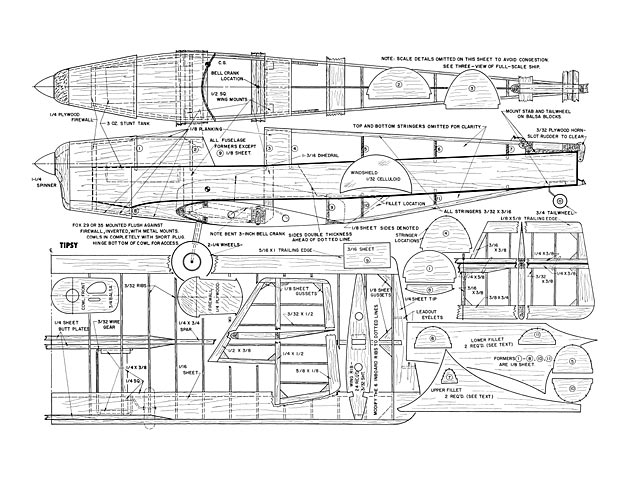 Quote: "The Avions-Fairey Tipsy Junior is one of the most successful European attempts at ultra-light airplane design in recent years. It has a span of less than 23 feet, and power is optional between the limits of 25 and 65 hp. With power near the upper limit, performance is very snappy with a top speed in the neighborhood of 140 mph - a figure never yet reached by production American light planes with 65 hp.

The Tipsy lends itself ideally to control line stunt; ample wing area and short tail-length afford short-radius maneuvers where necessary in anybody's stunt pattern. The dihedral does not hurt performance in any way, and serves to bring the lead-outs up from the low-wing position to the vertical GG location, thereby eliminating any in-banking or out-banking tendency normally associated with low-wing or high-wing control liners.

The 0.15-scale .29 - .35 powered model presented here actually outperforms any other stunt job flown by the author. This includes the slab-siders. The low wing-loading resulting from 375 sq in of wing area and light weight (the original weighs 24 ounces with 14 coats of dope), allow recovery from altitudes that would prove embarrassing with some of the more highly loaded stunt jobs.

Wing-rib and stringer spacing of the full-scale prototype are retained throughout, and all metal or plywood-covered surfaces on the prototype are duplicated with sheet balsa or planking on the model. Care in finishing the model and in adding all scale details result in an exact scale reproduc-tion that should hold its own in any control line flying-scale competition.

Construction is relatively simple and conventional, and only the points which might not be self-explanatory in the drawings will be discussed here. It is suggested that the prospective builder read the following comments, however, in order to establish an order of assembly. 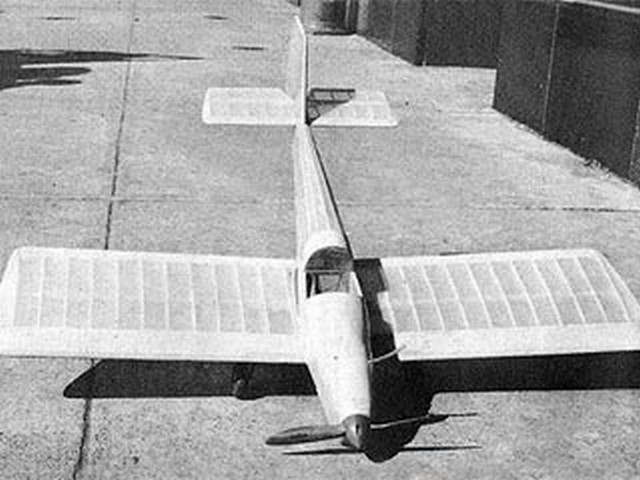