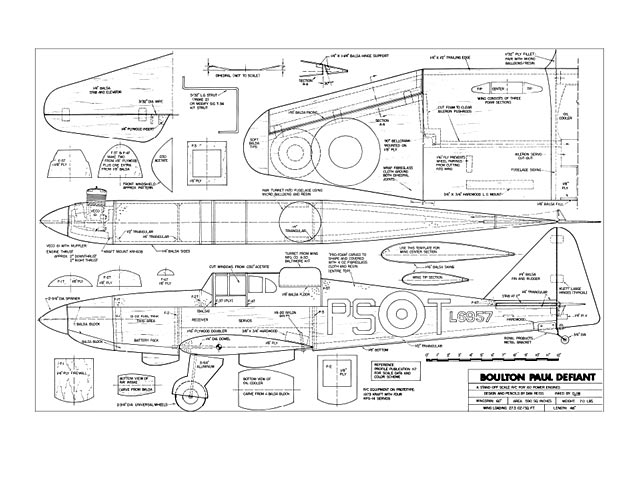 Quote: "Adding a gun turret doesn't make for an agile fighter, but it does make for an interesting .60-powered model. The Boulton-Paul Defiant, by Dan Reiss.

Be prepared to do a lot of explaining at the field with this aircraft. Not many people have heard of the 'Defiant,' much less ever seen one. If it wasn't for Profile 117, I probably would have missed this jewel too. What's so good about it? Well, as a full size aircraft it wasn't very successful. It was a British built airplane that the Germans used for target practice at the beginning of World War II. It wasn't meant to be that way. but that was the way it turned out. Since the Boulton-Paul factory was having trouble replacing them as fast as the Germans were shooting Defiants down, they were pulled from the front lines and relegated to less hazardous duties. You can get the full story in that Profile.

However, as an R/C model they're hard to beat. Their proportions are excellent, especially for a Stand-Off-Scale flyer like myself. So, with a set of plans in front of you and with the Profile as inspiration, clear off your work bench. You're going to enjoy building and flying this one.

Wing Assembly. Start with the wing first. Use the templates shown to cut the three foam sections required (one center section and two tip panels). Trim off the trailing edges and glue on strips of 1/4 by 1/2 in balsa. With masking tape on the foam to protect it, carve and sand the trailing edge to shape. Cut out the foam for the servo mount and the two aileron bellcrank mounts. Install the bellcranks on their mounts and epoxy them into the wing. Hook-up the aileron pushrods noting that the small one to the aileron crosses the dihedral joint.

Epoxy in the 1/8 in plywood rear wing dowel sup-port and servo mount. Temporarily install your servo and make up whatever linkage is necessary to get from the aileron push-rod to your servo. Using your radio, vary the servo from full left to full right to make sure that there is no binding. Remove the servo. Cut out an indentation in the foam to receive the 1/4 x 1-1/4 in aileron hinge support. This can be done by using a piece of #16 copper wire, bent to the proper shape, and inserted in your soldering gun..." 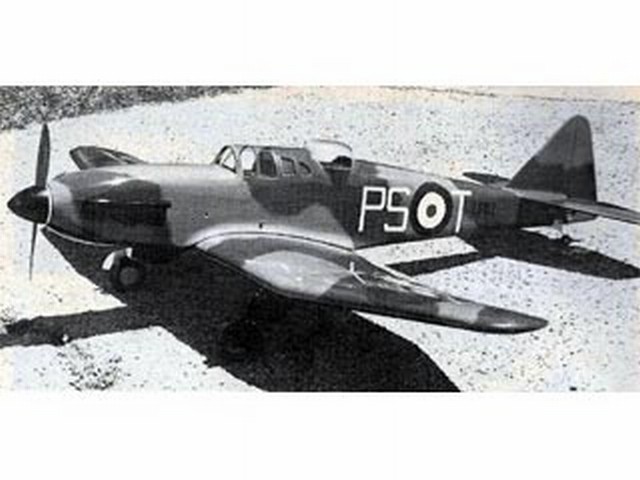