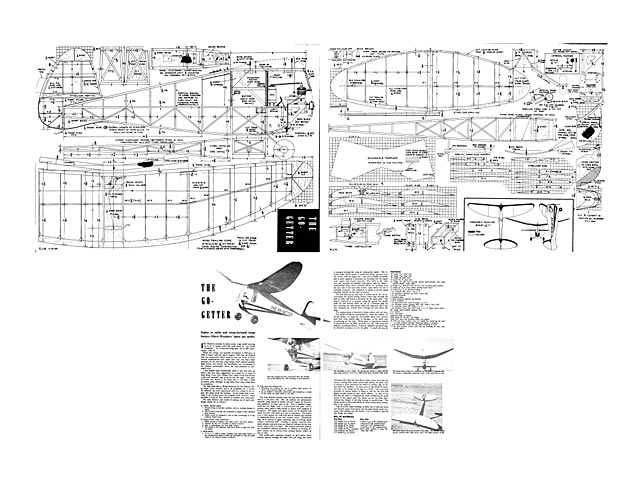 Quote: "Engine in cabin and swept-forward wings. The Go_getter, by Elbert Weathers.

Air Trails presents its latest scoop, a gas model carrying an ATC rating - well, that could stand for 'Air Trails Certificate.' It's a four-foot wingspan job of 330 square inches - Class B.

While this design was basically formulated in February of 1939, it wasn't until the end of August 1939 that the original ship was constructed, which required only two weeks of work. Several modifications were made after first test hops, made necessary by the new-type wing design which induced peculiar flight action - not serious, but nevertheless not contributing to the polished performance which the ship possesses as presented here.

I was kidded quite considerably when it was first seen by others. who had many suggestions on a name for it, some of them being Texas Steer, Bunny Nose, Andy Gump with Wings (with cowl removed) and so on far into the night. The name Go-Getter was chosen in the hopes that it will shine a little in contest work, although no big meets have come along since its completion.

The ship looks like a 'flying showcase for the Ohlsson 23' as thinks Irwin Ohisson, and in all probability he is correct. No difficulty has been experienced with the cooling of the engine, this being inside the fuselage. An air-intake hole is provided in the cowling above the propeller shaft however, which provides a fresh-air flow directly to cylinder fins continually.

The main features and results of making use of such new-design trends are as follows..."

Steve, Here is Elbert Weather's Go-Getter from Air Trails, March 1940 - both article and magazine plan. Note this is not a full-size plan, this is a scan of the original magazine pages as printed, 1940. 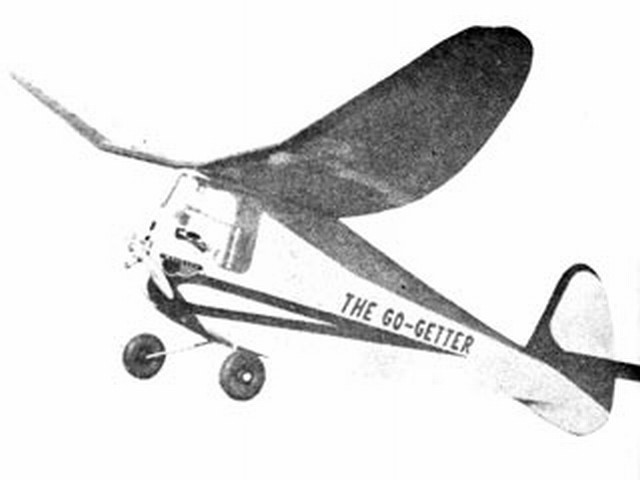