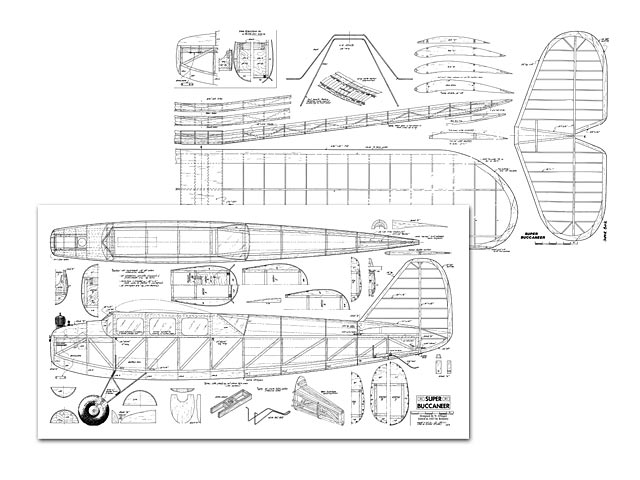 Super Buccaneer. Free flight gas model. Originally kitted by Berkeley 1937, this is a later tracing by Al Patterson that appeared in MB.

Quote: "Traced in ink by Al Pattersen from an original kit plan."

Quote: "Certainly one of the prettiest and most realistic-looking gas models to come out of the pre-WW-II era was Bill Effinger's 'Super Buccaneer', the biggest of the seven different Buccaneer gas jobs kitted by Bill's complany, the legendary Berkeley Model Supplies, during the middle and late '30s. The Super Buc was actually a redesigned, streamlined version of Effinger's highly successful 84-inch Buccaneer (oz5796). Rumor has it that another famous modeller, Ben Shereshaw, was primarily responsible for the re-design work, but we can't say for certain, If any of you readers can verify this, we'd be interested in hearing from you.

After getting involved in the OT movement in the late '60s, the first Super Buc this scribe can remember seeing was one built and flown by the young son of past SCIF member Jerry Johnson, who was the US distributor for Taipan engines at the time. Can't remember the young fellow's name, but I do remember the airplane - a real pretty ship, covered in light blue silk and trimmed in white. Someone else had started building the fuselage, then gave it to the younger Johnson to finish up when it was found that the structure had a built-in curve that would do a banana proud. Of course, it goes without saying that the kid entered it in several Texaco events at Taft and garnered more than his share of trophies with that 'crooked' airplane - mute testimony to the airplane's forgiving, rock-stable flying qualities.

Construction of the model is fairly conventional, there's just a lot of it. From all the planking and stringers, one would be inclined to believe that maybe Shereshaw did have a hand in the redesign after all. The airfoil is evidently a zip-zip section, moderately thin and highly undercambered. Because of the thin wing, the diagonals between the top and bottom spars are an absolute must; or, as an alternate, you could substitute 1/16 sheet balsa vertical-grain shear webs. Spruce spars, maybe enlarged to 1/4-inch square, would be a good idea if building the model for R/C.

The Super Buccaneer spans 90 inches, has about 1200 square inches of wing area, is 57 inches long, and will probably weigh at least five pounds as a free flight, more with R/C - this airplane is a flying lumberyard. Speaking of R/C, the existing tail surface spars would be perfect locations for hinging the control surfaces. For SAM R/C events, a .53 is the largest legal size glow or converted glow engine allowable. An R/C version with something like an 0.5. 4-cycle up front would make a terrific sport flier; you could shoot touch-and-goes all day long and it would never get dull..

The photo that accompanies this write-up [pic 003] was sent by John Pond, as part of his March column; a lucky coincidence, as we were just about to start searching for a Super Buc photo from past issues of MB. The photo shows designer Bill Effinger himself assembling the original prototype Super Buc at the 1937 Nats in Detroit. Bruce Lester, of Ontario, Canada, who has been supplying Pond with those neat old photos that have appeared in recent issues of RCMB, also supplied this one. Thanks, Bruce, you couldn't have sent it at a more opportune time!

Best of luck to those who decide to undertake the Super Buccaneer project. We hope you enjoy it." 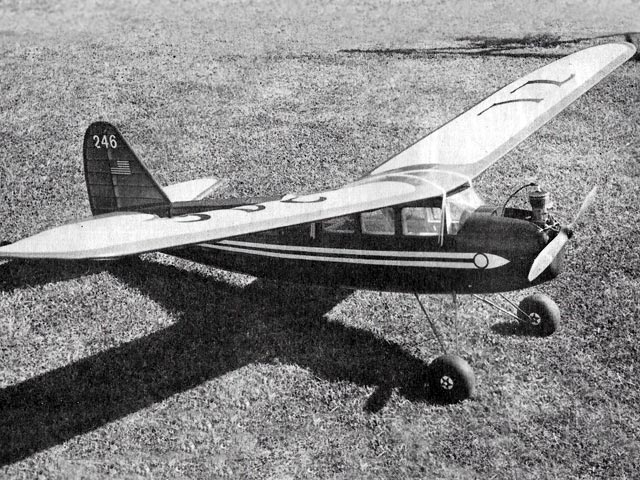