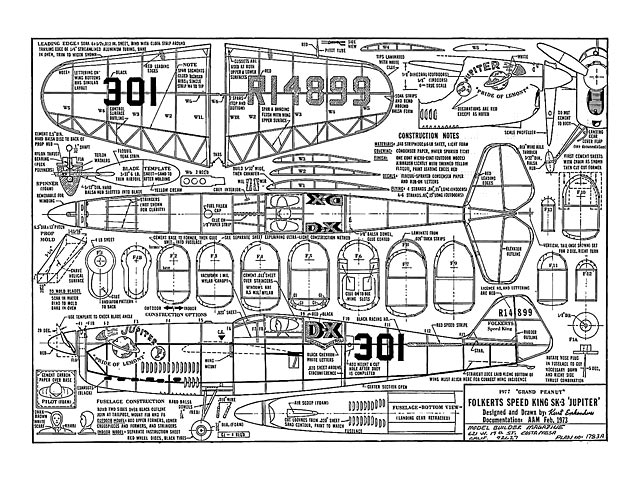 Quote: "Folkerts SK-3, by Kurt Enkenhus. Overall winner of Model Builder's 1977 Parcel Post Proxy Peanut contest, this has to be one of the best Peanut Scale models ever designed. Plans show 'heavy' and 'light' versions.

Cleveland, Ohio, 1937. The Thompson Trophy. With rumors of war already casting shadows over the Golden Age of aviation, they gathered here for a showdown to see who was the fastest in the world. While they all worshipped speed, a glance at the bulging cowls confirmed that most of them put their faith in brute force - eight hundred horsepower or more of radial engine. One man, Clayton Folkerts, an aeronautical genius, preferred to court the Goddess of Flight. His SK-3 Speed King, the '"Pride of Lemont', boasted only a 400 horsepower Menasco Super Buccaneer, but the slim, inline 6 was so smoothly housed that it was the sleekest racer there.

The start - and the SK-3 trails next to last! Then the Goddess smiled, and Rudy Kling, passing one after another of the eight aircraft ahead of him, flashed to a photo-finish victory at an average speed of 256.91 mph.

What made this plane so remarkable? Details of the fascinating development of the SK-3, as well as Bjorn Karlstrom's three-views on which my plans were based, may be found in the February, 1973 issue of American Aircraft Modeller.

The aerodynamic features which enshrined the SK-3 in air racing history also give it superlative performance potential as a 13 inch wingspan Peanut scale model. The low aspect ratio wings of generous area, long fuselage, and clean lines result in a model of light wing loading, low drag, and excellent flight stability which packs plenty of rubber winds. My enthusiasm grew when preliminary calculations sug-gested that two minute flights should be obtainable if the total weight could be kept to 2 pennies.

Before discussing the construction methods which permitted this weight goal to be attained, let's spend a little time analyzing the performance of an indoor rubber-powered model airplane..."

Update 12/08/2020: Replaced this plan with a clearer copy, also transcript, thanks to JanNovick.

Quote: "..I'm submitting my copy anyway, perhaps as an alternate. Both oz5438, and the original scan from which I derived my submission, exhibit the same defect of unequal wing length. I have corrected this on my copy so that both wings are now equal. As such, it might provide a more suitable building platform. Despite my modifications I would recommend, for consistency, building on one side only and then reversing the plan of that side to build the other, rather than trying to build both wings at once over the plan. This would be the only way to assure a matching set of wings." 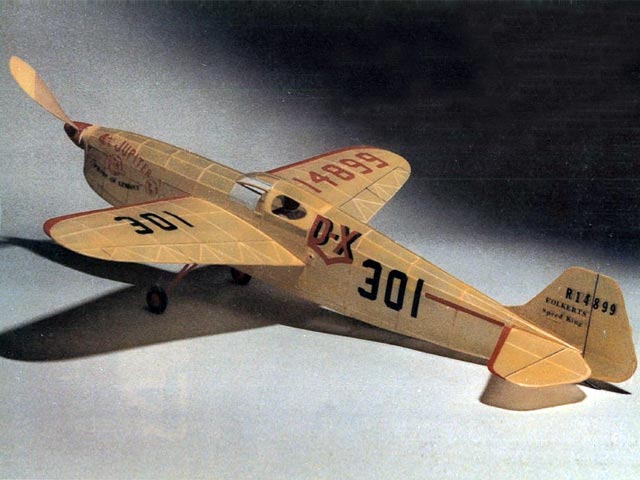