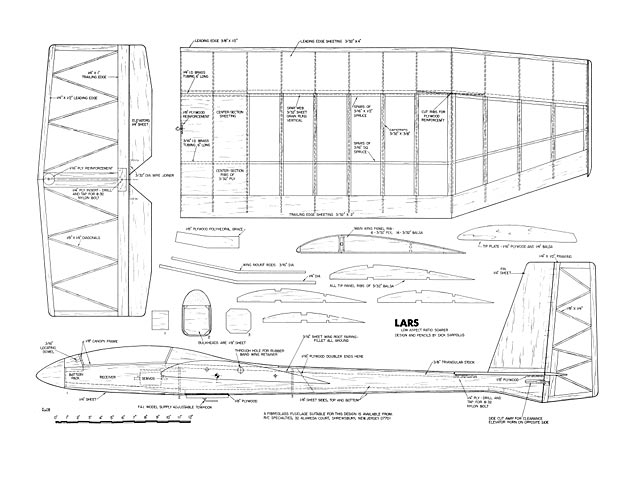 The name 'LARS' stands for Low Aspect Ratio Sailplane. The first question usually asked about this model is - why did you use a low aspect ratio wing on a thermal soarer when everyone knows high aspect ratio wings are more efficient, therefore better?

That's why we designed and built it - we weren't convinced that high aspect ratio wings really were better for our size aircraft. It is true that most R/C sailplanes use high aspect ratio wing designs; usually limited only by structural considerations. These long, slender wings even seem to 'look right' when the sailplanes are circling gracefully in the thermals, beneath the clouds. Full scale sailplanes incorporate even higher aspect ratios than our models can duplicate. Lower ratios are used on slope soarers, racers, pattern aircraft, etc. So why try a thermal soarer with a low aspect ratio wing?

If it would work, such a plane could have several advantages over conventional sailplanes: The wing, having a shorter span, would be stronger and able to withstand heavy winch launches and higher winds. The model would be easier to transport with shorter, wider wing panels. A large amount of wing area could be used in a short span for lighter wing loading and hopefully better performance. We had been successful R/C soarers with lower than usual aspect ratios, and Free-Flight models tend to have lower aspect ratio wings. A friend of ours argued convincingly for low aspect ratios, drawing on his experience with hand launched glider design. The potential benefits seemed to justify an attempt at a low aspect ratio design.

We laid out a six foot span wing, to use standard 36 in balsa. Polyhedral was used for better turning capability with 24 in center panels and 12 in tip panels. The center panels have a 15 in chord with tip panels tapering to 10 in. Figuring on a 75 in span (including fuselage width as is normally done) wing area is 1065 square inches. Aspect ratio, span squared divided by area, is 5.3 to 1. This seemed like a good place to start; anything lower appeared impractical for stability considerations. The airfoil drawn up was a flat bottom, 10% thick section.

Wing construction is conventional built up practice; spruce spars, vertical grain spar webbing, planked leading and trailing edges, capstrips. Wings have tubes in the center-section to slide on a 1/4 in dia steel rod built into the fuselage. 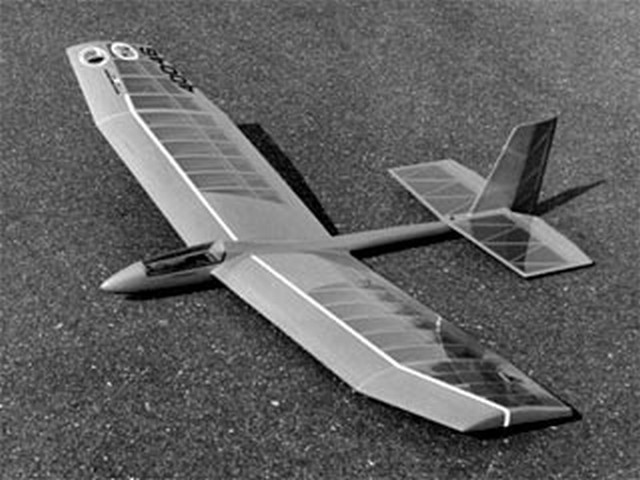