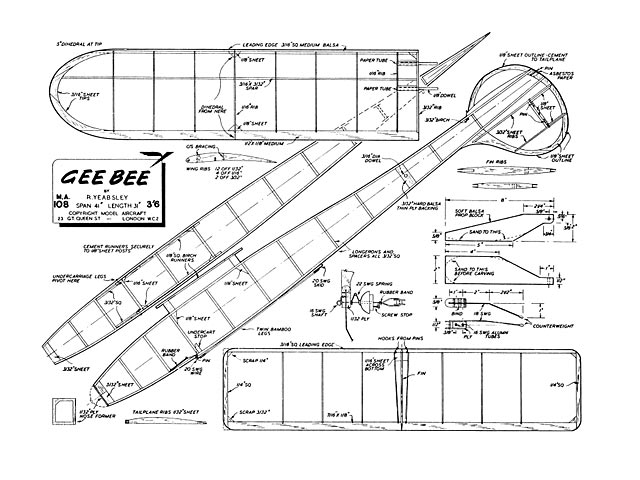 Quote: "ROY YEABSLEY is widely recognised as a glider expert. He is, in fact, probably the leading contest glider exponent in this country today, placing high in major contests with a surprising consistency. It was Yeabsley, too, who originated the type of 'giant' glider for contest work, which has now proved so popular, both to lightweight and FAI loading. It is a point of interest that the original Yeabsley Sunspot (oz7318) has lived through at least three contest seasons and has probably aggregated more flying hours than any other single contest model. It was only recently that it was finally regarded as no longer airworthy and destroyed - actually burnt on the flying field

Much of Roy Yeabsley's success is undoubtedly due to the fact that he is out flying whenever possible, underlining the fact that however good the model, consistent high performance is still a matter of flying technique. He is also a member of the strongest competition club in the country - Croydon. This again is an undoubted advantage for it is a very rare occasion that one can visit Epsom Downs of an evening or weekend and not find some of the Croydon members test flying. Usually Yeabsley is amongst them. Those glider enthusiasts who aim to emulate his successes should bear this well in mind.

However, the subject of our report is a Yeabsley rubber model, not a glider - the first rubber model, incidentally, we have seen him flying in contests. Whilst employing many of the familiar design features of lightweights, the detail design is of sufficient interest to warrant a more thorough investigation.

The model itself is large, as lightweights go, with a wing area of nearly 190 sq in. Total weight is only just over 4 oz and so the wing loading is very low - lighter, in fact, than most present-dlay lightweights. But the most striking feature is undoubtedly the underslung fin - a feature which Yeabsley has retained on his very successful Nordic glider.

Fin area is definitely on the small side, but ample enough with the very long fuselage length employed. Locating the rear rubber anchorage well forward of the end of the fuselage has enabled the wing position to be kept well forward - 5-3/4 in from the front of the fuselage - with a resultant centre of gravity position of roughly 60 percent of the chord. The layout is fully dimensioned on the general arrangement.

The flying capabilities of this model were first brought to light at the Bill White Memorial Cup contest held on Blackheath in January, 1950. Using moderate power (10 strands of 1/4 in strip) on a 16 in single-bladed folding propeller, climb was a fast, tight spiral to the right, reaching some 350 ft in height in a matter of 40 sec. At the end of the power run the model circled to the left on the glide. To achieve this the rudder was set to the left and sidethrust was then used to give a right spiral under power - a 'safe' trim since the rudder is always trying to hold the nose up under power.

This trim is worth discussing in some detail for it possesses certain advantages for folding propeller designs - and also one or two disadvantages. It is undoubtedly a fact that greater height can be obtained with a two-bladed freewheeling propeller... " 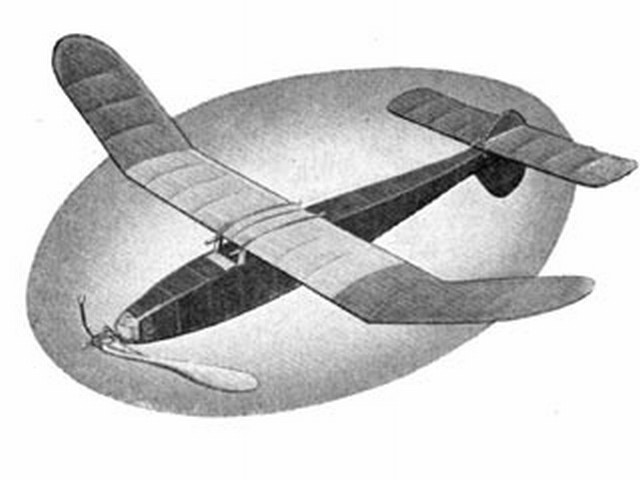