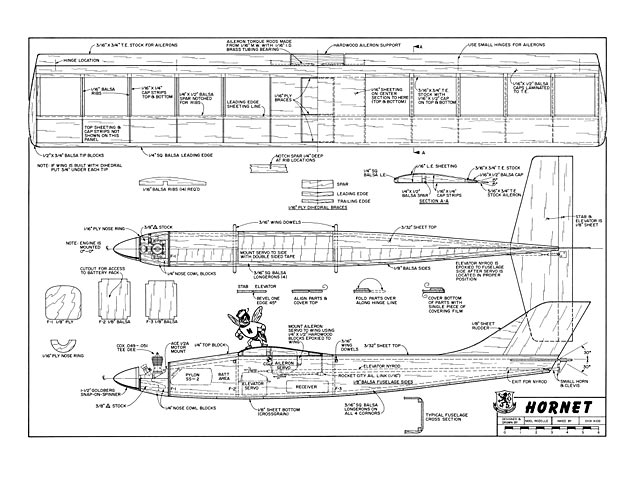 If you answered yes to the above questions, you're ready for a Hornet.

1/2A flying is really coming into its own lately and there are a lot of reasons why. The reasons above are some, but there are many more. It's really a switch to be able to have a brand new airplane with motor ready to fly for less than thirty bucks and one that finally costs you less in gas than most .60's need for priming and, how aboul this - a small airplane that actually performs, not just stays in the sky and struggles around.

Let's go one step further - there are a lot of hot .049 planes around for racing and even some for pattern and most of these do a great job. But what about us knock-around fun-fliers who haven't got the interest in those events? What about the guy who just wants to go out and have a ball with as little fuss and expense as possible, the guy who wants a good flying, stable plane he can give his kid some stick time on without having to build the trainer that he'll probably never get around to anyway?

If you fall into one of the above categories, you're ready for a Hornet. It's a new 1/2A just for the fun of it and no special reason. It has very simple, fast and strong construction. It looks good and it's not cramped for radio space. The wing design gives it a glide you won't believe for setting up those dead stick landings everyone is so scared of on 1/2A's because a lot of small planes have a habit of just falling out of the sky when the fan quits - but not the Hornet.

It might sound like I'm going over-board a little on this, but the Hornet has been a lot of fun for everyone who has tried one. One of my friends goes out on the dirt roads near his home alter work and flies till dark several days a week. Every time three or four of us get together at a local school soccer field, we end up drifting into a very familiar left hand circle around the goal posts until we run out of gas and argue for hours about who cut the most pylons.

I could go on for a long time about the Hornet, but it all boils down to one thing, the Hornet is fun and if you don't believe it, just build one. 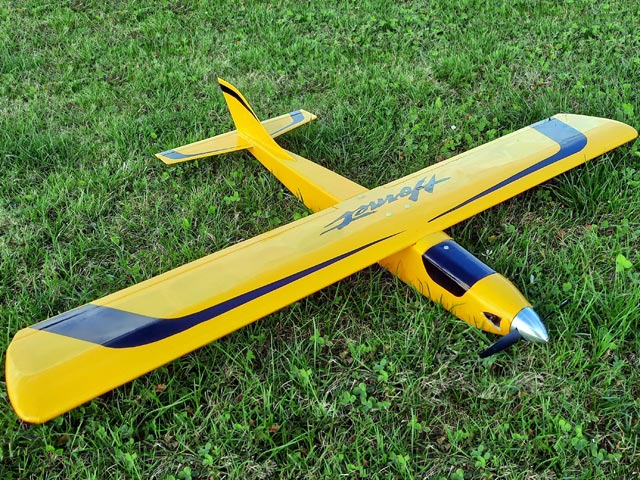 Hi Steve, I found this plan (The Hornet) on your site and I found it a nice little, cheap plane. So I’ve build one and put it on electro. I’ve used the following setup: Electric motor is a SK3 2836 1500kV op. A regular speedcontroller of 30A, prop is an electric APC 7x6. Lipo’s are 850 mAh, 3S, 45C. I’ve calculated this with eCalc and it promised me a nice power-weight ratio of 2:1 with a top speed round 134 km/h (that is 83 mph). A nice speed but not bloody fast but with an unlimited vertical climb. That was the goal I was aiming for and this setup does this exactly. Unfortunately after 4 minutes battery time is up… I’ve used 12 gr metalgear digital servo’s, the elevator servo goes in the tail for CG reasons. Below is a picture of my electric Hornet [see more pics 004]. Cheers,
DriesNeyrinck - 25/08/2014
Hi, I've sent a few pictures of a recent build from RCM/Outerzone plans [pics 005-007]. The Hornet has been converted for electric power instead of the Cox .049 engine. Electric set-up is as follows:
Power UP 450 Speed 1500KV, Sky Power 30 Amp ESC, 3 Cell Lipo 1300Mah,APC 7x6E or 8x8E Speed.
For more build details see http://tslidehaven.com/a%20tale...
JohnnyB - 09/09/2019
Here is an electric version of the 1/2a Hornet, I could have done a better job of the nose to be fair [pic 008]. I used a Racestar BR2212 1400KV outrunner turning a APC 8 x 4.5 E prop, lipo is 1500mah 3s, 30amp turnigy plush esc, getting around 230watts. I'm getting 5 mins or so with mixed throttle. I glued some turnigy 9g servos in the wing for ailerons and mounted a Hitec HS5055MG on the elevater. It's not an 80mph machine but it not slow by any means 50mph maybe alittle more but damn this thing turns quick and tight, good in the turns, I did have probs with wing incidence, ended packing the trailing edge up slightly, prob my building error. I choose no dihedral built it flat. It is fun to fly tho. Regards,
Colin Henderson - 15/06/2020
Hello, here are a few pictures of my new model Hornet [main pic, 010,011]. I flew this 43 years ago. Equipment is: Turnigy 2826-6 2200 KV, Zippy battery 3/1050maH, prop 6x4. Thank you very much,
Wolfi Berger - 05/09/2020
Hi Mary, Hi Steve. Build the Hornet, but the wing disintegrated mid air. So i build a stronger one. You can see it here: https://www.rcgroups.com/forums/showthread.php?3257029-Hornet-second-life
Thanks for your effort on this site.
woodbug - 25/12/2020
Hi attached is my electric version of the Hornet [pics 012-014]. Built out of polystyrene insulation material. Regards,
Phil Curtis - 21/03/2021
Some more details on the Hornet: The covering used was iron on heat shrinkable, taking care not to use a high temperature as not to melt the base polystyrene. The motor is a PROPDRIVE v2 2836 2200KV, with a Turnigy 30amp ESC, spinning a 7x6 propeller. Producing 247W, at 28 amps, on a 3S 1.8amp battery. The decals were produced using photoshop and printed on to water slide paper. Regards,
Phil Curtis - 26/03/2021
Add a comment