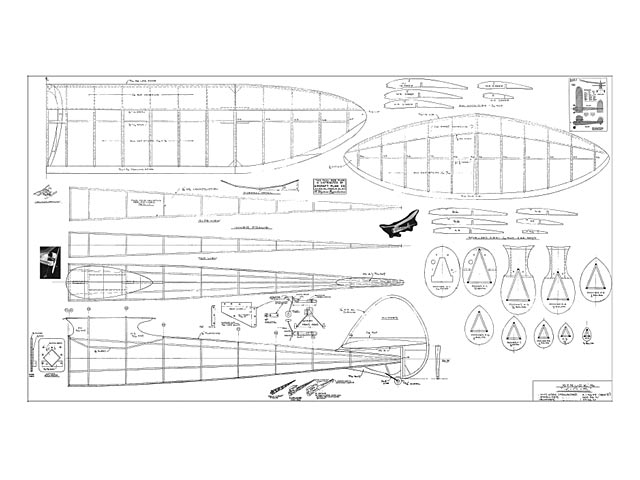 Quote: "How You Can Build a Modern Streamline Version of the Old Record-Breaking KG, in which are Combined Super Soaring Qualities and a Skyrocket Climb. By Henry Struck.

REGARDLESS of what the rules are, or will be, the basis of a winning design is stability. Probably the first model to be designed primarily for stability was the original K-G built in 1934 by Joe Kovel from complete designs and plans developed by Charles H Grant. The success of this ship did much to popularize the sport of gas model flying.

Though it was a miniature airplane rather than a model, its size and weight were no great handicap, for under a 1/8 ounce per pound fuel rule it set a world's record of 1 hour 4 minutes, which it still holds to-day under this fuel allowance rule. Slowly the K-G passed from the contest picture as the trend of design moved toward smaller, more powerful ships.

The high speed of the modern model planes puts even greater stress on the principles of stability.

What could be more logical then, than to revise the construction of the old K-G to meet the specific demands of present day contest flying? Though the new ship scarcely resembles the K-G in outward appearance, a brief examination of the three-view assembly plan will reveal that the arrangement of aerodynamic forces is identical. Every effort has been made to achieve maximum duration through effective streamlining and minimum weight, and many desirable features have been incorporated in its construction. The all balsa fuselage can be doped or varnished to resist the ravages of gas and oil and the rough handling a gas model is bound to get. The wing and tail construction offer great strength with light weight. The ship can be dismantled and reassembled with exactly the same settings by a number of 'keys.' The entire motor unit can be quickly removed for checking and servicing.

From its initial test the new ship performed up to all expectations. In fact in its first contest the K-G-S made the longest flight of the day, 4 minutes, 38 seconds, on a 17-second motor run, in spite of a scarcity of thermals, and also turned in the best three flight average.

Even more conclusive are the innumerable tests that have been made to discover its reactions under maladjustments. Left or right-thrust merely altered the power circle, while up-thrust caused it to hang on the prop while climbing. Only slight adjustments of the rudder were needed to obtain any size gliding circle desired.

So, we are happy to present the K-G-S; stable, strong, efficient and controllable - an ideal high-power contest gas model.

Construction Notes: The plans have been carefully prepared with all essential parts shown full size and illustrated with numerous sketches. In Part I the wings and tail assembly are to be described in the hope that a proper amount of time will be spent on them. Many builders in their rush to get out and fly their new model produce 'butchered' or warped units that are often the cause of disastrous crack-ups.

Obtain the best possible balsa of the grade specified, as it will not only assure a better model, but prove a pleasure to work with.

Wing and-Tail Construction: As the construction of the wing and stabilizer is identical, they will be described together. From the 1/8 to 1 drawings given on Plate II make full size layouts on which to build. The distances from the leading and trailing edges to the center line are given for each rib station. Connect these points guided by a strip of balsa held in place with pins or drawing curves.

Trace the shape of the trailing edges and tips from your layout onto 3/16 medium sheet balsa. Cement the sections together and shape to a triangular cross section with knife and sandpaper. Cut 1/16 deep notches in the trailing edges to receive the ribs.

Pin the trailing edges and the 3/16 square leading edges on the layout. The ribs are shown in full size on Plate III from which they may be transferred to 1/16 sheet balsa. A metal or cardboard template may be made of the main wing ribs to speed up cutting them out. Cement the ribs in place, so that the top of each rib is 1/16 below the top of the trailing edge, to leave a recess in which the cap strips are later fitted.

Remove the wing frame from the layout and rejoin the panels at the correct dihedral, reenforcing the corners with gus-sets of 1/8 sheet. Insert the leading edge spars of 1/8 x 1/4 and the main spars of 1/8 x 1/2 hard balsa. The main spars have to be tapered to 1/8 x 3/8 at the tips, in the wing and to 1/8 x 1/4 in the stabilizer. Gussets of 1/8 sheet are used to reenforce the joints.

Apply cement liberally to the leading edge and pin the 1/16 sheet balsa cover-ing to it. Bend the sheet over the ribs, moistening the upper surface slightly to facilitate bending, and glue the balsa to every rib and the leading edge spar. Cover one panel at a time, correcting any tendency to warp, before the cement has set solidly. Fit the cap strips in place using double width strips over the center ribs. Trim excess balsa from the leading edges and smooth the framework with successively finer grades of sandpaper. (See typical airfoil construction, Plate II.) 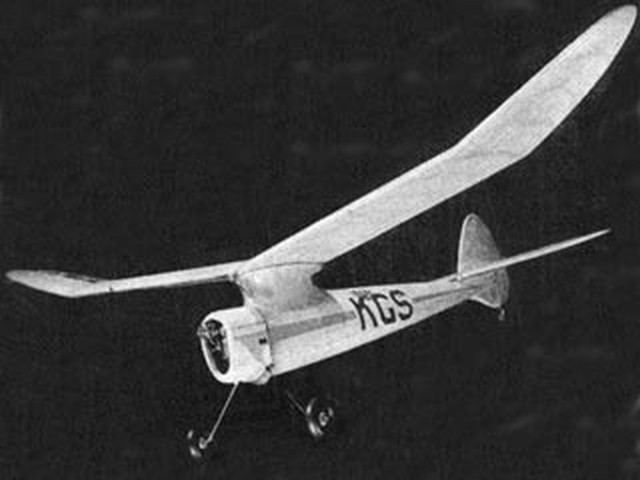