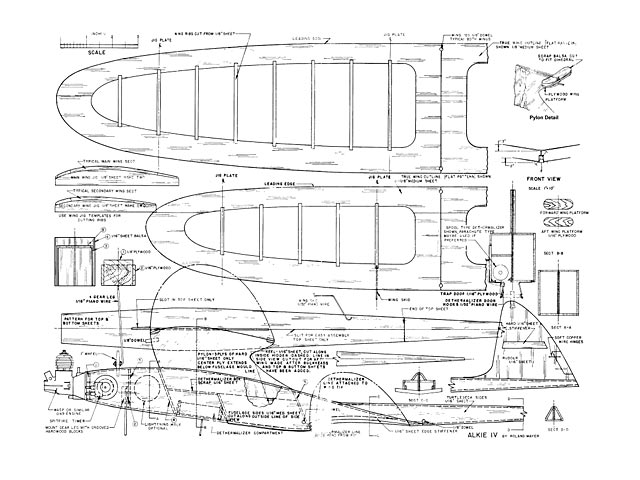 Quote: "No freak, just to be different, this is a high performance ship with many special and desirable attributes. This duo-mono configuration was proved by the French Dellannes - real aircraft. Alkie IV, by Roland T Mayer.

As the name implies, this is the fourth in a series of duo-mono configurations that we have had the pleasure to design arid fly in the past few years. After this rather lengthy association with he little by-wingers, we will go on record as saying that for sure at least one of those fifty million Frenchmen wasn't wrong. M'sieur Delanne, who turned out several admirable duo-monos just before the roof fell in on La Belle France, really had something.

As the latest in our series, Alkie IV displays the type of performance we had hoped might eventually be attained when the number one ship was started. Like the previous models this ship has shown itself to be extremely stable, particularly with respect to stalls, and excellent for windy weather flying. Under power the climb is steep and steady with none of the eccentricities so common to many hot free flights, and because of the unique characteristics of the duo-mono conftguracion, the transition from climb to glide is a sight to behold.

This helpful peculiarity further accounts for an extremely stable, flat glide by virtue of its automatic compensation for gusts and rough air in general. The gimmick boils down simply to the proper use of decalage. In the case of Alkie IV, the main wing was set at +3° and the secondary wing set at -2°. The idea is to have the secondary wing approach its position of maximum lift as the main wing approaches its stalling point. The resulting unbalanced pitching moment immediately acts to restore the ship to its normal flight attitude. This arrangement, simple as it may seem, accounts for the unique and pleasing characteristics of the ship.

Since the performance of a free fllight model is generally proportional to its flying weight, care should be exercised during construction to keep the ship as light as possible without sacrificing structural strength. If intended for competition, Alkie IV should be held close to the 5 oz minimum for half A's.

The wings are of conventional Ritz type construction built on a simple jig made up of two 1/8 sheet plates cemented to the work bench at the positions indicated on the plan.

The fuselage is built around a center keel. First the center ply of the pylon is cemented in place as shown. Then all the bulkheads except number two are added. Next add the top and bottom sheets. Now cut away keep and bottom sheer, previously marked to allow passage for the secondary wing...." 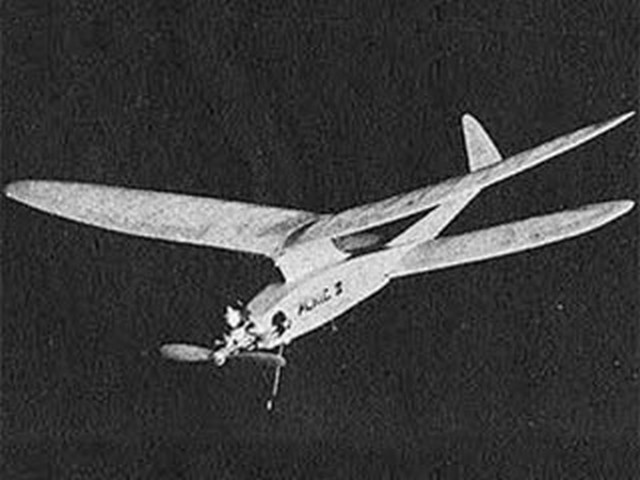