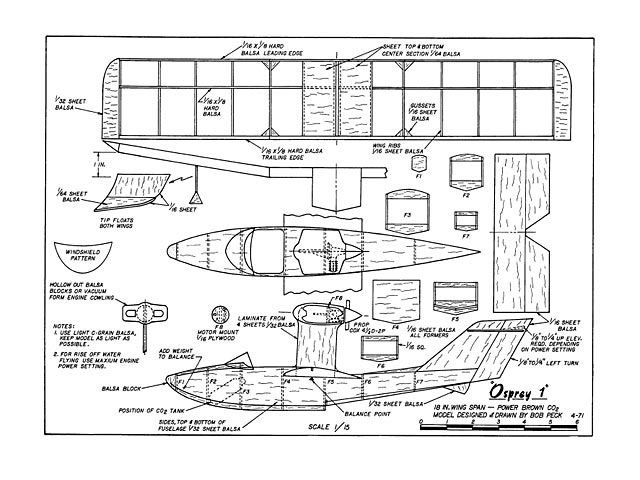 Quote: "The Osprey 1, a homebuilt sport seaplane designed by George Pereira of Sacramento, California, is powered by a 90 hp Continental engine and has a cruising speed of 125 mph.

Fifteen years ago I designed a similar model seaplane with which I had a lot of trouble - it lacked directional stability. The pusher prop caused too much turbulence over the rudder making any rudder adjustments useless. The problem was solved by adding tip rudders, but I feared that I might have to do this to the Osprey also and ruin its scale appearance. I was happy to find that the Osprey was very stable and reacted normally to rudder adjustments. For this I must give credit to George Pereira for a well-engineered design.

The model lends itself well to the Brown CO2 engine for a number of reasons. The CO2 engine will run backwards which is necessary for the pusher configuration. The standard Cox 4-1/2 in dia two-pitch propeller mounted backwards can also be used. The CO2 engine is also easily started which is a help in the confined area in which it is mounted.

The only deviation I made from the full-sized design was the tip floats. They have been modified to reach down closer to the water so the model will not tip to one side or the other while taking off. This prevents it from taxiing around in circles in the water. I tried several float designs before coming up with the one shown which works quite well. The design shown, with the extended tip floats, is very stable, and I have had hundreds of fine flights with it.

Construction. Keep the construction light. It takes approximately twice the power to ROW (rise off water) as ROG. Any excess weight exacts a double penalty and may make ROW impossible. Avoid using white glue because it is not waterproof and the water will dissolve your glue joints.

Start the fuselage by gluing the formers and sides together and then sheeting the bottom..." 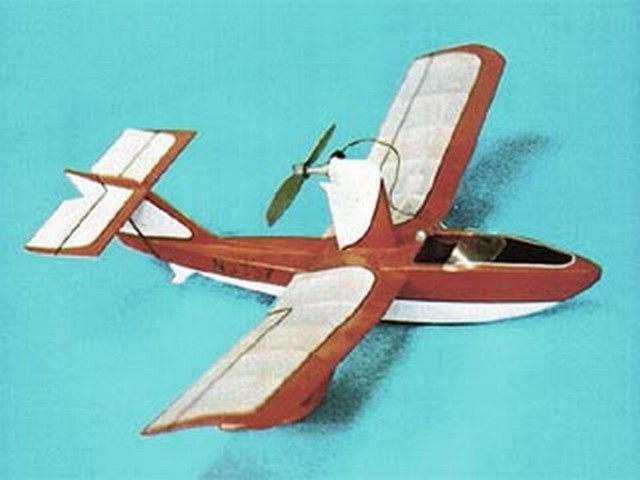