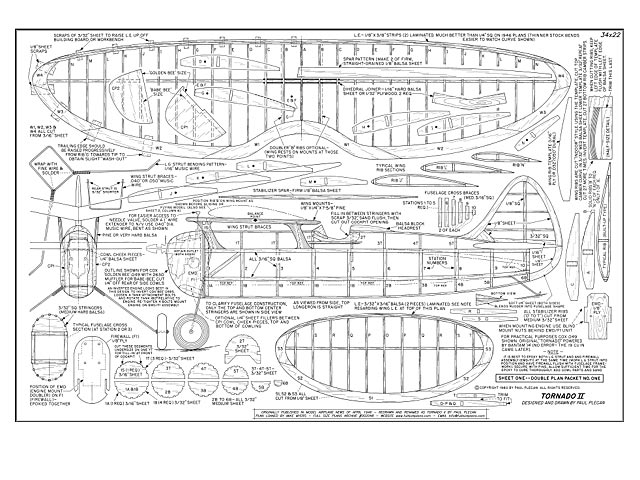 Quote: "This will provide Class A fans with fine performance and good looks. Tornado, by Paul Plecan.

AMONG free flight gas models Tornado represents the minimum in size that can be built consistent with stability and performance. The first consideration in a really small model is wing tip vortices and maximum wing area per unit wing span. To cut down the tip vortices, an elliptical plan form is employed in the wing design. This also helps keep the major chord of the wing approximately one-third of the way out on each wing panel, the most efficient portion of the wing.

Due to turbulence from the propeller and to the proximity of the fuselage, a cut-out is made in the centersection, cutting down the area of this relatively inefficient part. A good-looking model Tornado will nevertheless look best when fitted with a windshield, headrest, full cowling and prop spinner. These items are optional, dependent upon the modeler's whims. The type of engine used will determine to a large extent the possibility of a full cowling, as the gas and timer controls will have to be easy to get at irrespective of cowling design.

The original Tornado was worked out when the first Bantam engine appeared on the market, and it should be more successful when fitted with the ultra-light Atom engine since the wing loading will be smaller, a serious consideration in a small model - most 'small' designs are a bit on the fast side. For an extremely easy starting engine, the Elf single can be recommended. Then, if desired, control lines can be fitted if you don't want to take chances on an out-of-sight free flight model.

Since the average model builder appreciates full size outlines and drawings, the more difficult outlines are given actual size in the magazine plans. Note that the fuselage plan is the only drawing you'll have to make up yourself. Once that is done we can go ahead with construction.

FUSELAGE: The main frame of 3/16 in sq balsa is first assembled over the full size fuselage plans, care being exercised to see that the top longeron is as straight as possible. A bend in this sec-tion will throw the stabilizer incidence 'out of kilter.' When two sides have been built pin down to the workbench in an inverted position and cement the cross-braces in place. Before removing the fuselage frame from the bench, cement in place all bottom formers (1B to 6B) and add the 3/32 in sq stringers. When the cement has dried, the frame-work can be removed from the bench and the upper portion of the fuselage added.

Once the formers and stringers are in place, the area around the cockpit can be filled in with 3/32 in scrap sheet of moderate softness. When the ce-ment has dried the area can be sanded smooth and a cockpit opening cut out. Note that the 3/32 in sq stringers along the top of the fuselage are not trimmed at the aft end until the stabilizer is covered and mounted in place.

Now cut F-1 from thin plywood or fibre and cement to the front end of the fuselage. The wing mount is assembled next, and if you want a little extra strength the nose sec-tion and the area around the wing mounts can be filled in. Take care to get the shape of the wing mountstruts exact as the incidence of the wing mount should be just as shown on the plans unless you want to do some experimenting yourself.

TAIL SURFACES: Construction of the tail surfaces is of the simple built-up type. A full size outline for half the stabilizer is given - trace the outline on some thin paper and invert it to obtain an entire stabilizer plan. The outline of the stabilizer is pinned down first and strips of 3/32 in sq are trimmed to length and fitted in place to form the bottom part of each rib. The spar is now tapered to the necessary size and cemented in place..." 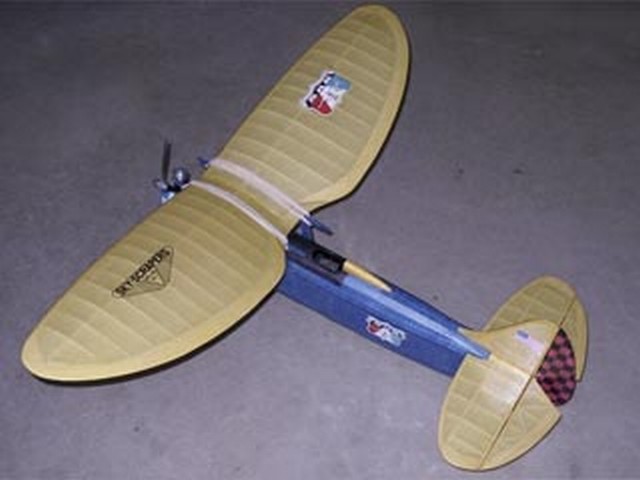