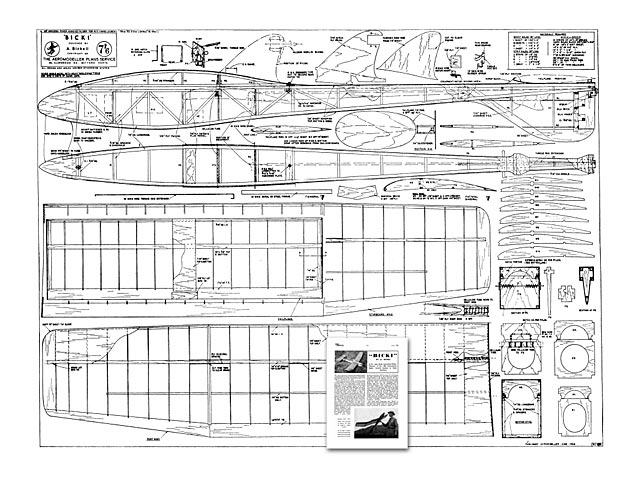 WE ARE PLEASED to welcome this excellent radio-controlled glider from the mountains of Switzerland, knowing how well it fills a long-standing gap in our range of Aeromodeller plans.

A well-tried and proven design, it has been flying in several different versions in its home territory for over three years. As a radio glider, a slope soaring glider and as a power-assisted glider it has been enjoying remarkable success, placing second in the R/C Glider event at the 1954 Swiss Nationals, and taking top honours in the same class in 1955. As a glider its best performance was probably at the 1955 International radio control contest at Essen in Germany. Here against strong opposition from all over the Continent it carried off top honours, with designer Bickel demonstrating superb piloting skill ably assisted by Arnold Degen who did the launching from a 200 metre line. Particularly impressive was Bicki's fish-tailing ability when it came to spot landing, the pilot bringing it in right on the button, sensitive control reaction obviously contributing much to the excellent performance.

Bickel's original machine carried a home-made single channel receiver designed by his clubmate Nievergelt, using four hard valves, operated by a modulated transmitter. To operate the control surface a servo motor drives an extension shaft by means of a worm gear, this shaft connecting to the rudder horn which is spring-loaded in the opposite direction. We have shown on our APS drawing the normal reverse escapement system which permits a nice long rubber motor for those who want prolonged soaring. Readers will also note the straightforward yet practical structure. (Take a look at that dural or steel wing tongue!) The modification for power conversion is very ingenious. The normal rear hatch being removed and replaced by the hatch-pylon arrangement which keys with fuselage formers F3 and F4 and secured by the 8 BA Simmonds nut shown on the drawing. Another point for constructors is, that although Modelspan heavy-weight tissue is specified on our drawing, we do recommend silk or nylon for those who can afford it, as these materials certainly provide a really permanent covering.

One final point. Remember that 'Bickie' is a glider and a sucker for thermals. So make sure you can spin the model down by having sufficient rudder movement to promote a tight turn. " 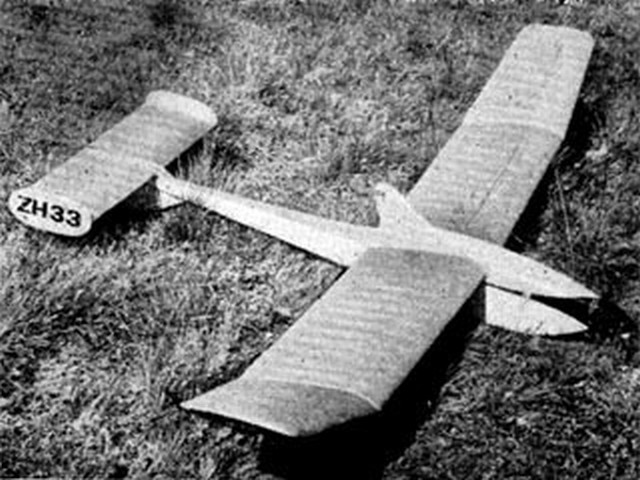