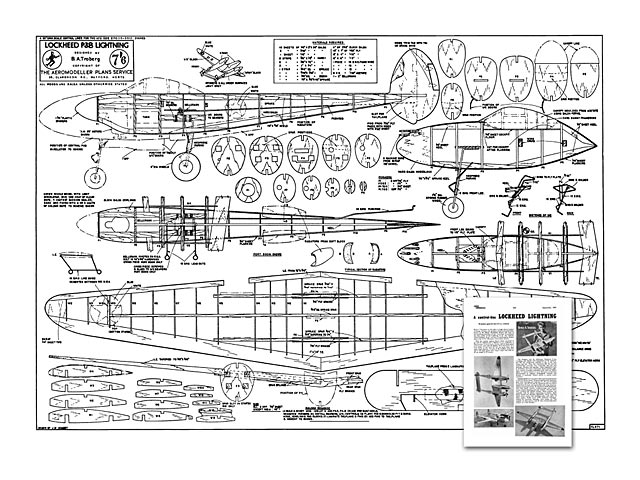 Lockheed P-38 Lightning. Scale twin model for control line. With original engines fitted, an AM 25 inboard and a Webra 1.5cc outboard, it flies between 55 to 65 mph. AUW is 40 oz. Model by Bengt Troberg, from Aeromodeller September 1957.

BENGT TROBERG on the right is a high school student in Hango, Finland, and secretary of the local model club, known as the Hango Flygklubb. Bitten, like most of his modelling clubmates, by the 'twin-bug' he produced this fine model of the Lightning in its very realistic metal wallpaper finish, and says its performance betters that of the APS Mosquito with similar motors.

With the original engines fitted, which consisted of an AM 25 inboard and a Webra 1.5 cc outboard, it flies between 55 to 65 mph. On the AM 25 alone speed is 45 m.p.h., and with the Webra, 30 to 35 m.p.h. It is rock steady on the lines (52 ft.) and pulls more than many large stunters. In spite of the smallish wing area due to the high aspect ratio wing it copes well with an all up weight of 40 ounces.

The designer, and his clubmate, Styrbjorn Eison Liindberg who helped with translation of the material, feel that the exceptional stability is due to the twin booms and fins. They also comment that the tricycle undercarriage provides very enjoyable take-offs and landings. Another club member, ships telegraphist Lam V. Forstrom, has built a duplicate, shown bottom right. This version is equally successful, and with two Webra Mach 1's travels around at over 60 mph. It has been demonstrated at seaports throughout Finland and abroad, in particular Poland where it caused much comment.

Construction does not follow the normal sequence due to the twin boom layout. Wing should be built complete, apart from sheeting, and formers F3, F4, and F5 glued in position, also P4, P5 and P6. Keels for the two booms should then be built and assembled with wing structure, adding remaining formers. Be careful to check alignment, then add engine bearers, undercarriage, and control system before planking pod and booms. Fit and carve nose, cowling and radiator blocks.

Build tailplane and assemble with fin before cementing to booms, again being careful and checking alignment. Plank wing and finish entire model with sanding sealer and plenty of elbow grease, finally cover with metalised wallpaper, adding the necessary lettering, rivet marks, etc. The original was then given a coat of slow-drying high-gloss lacquer as a final finisher! " 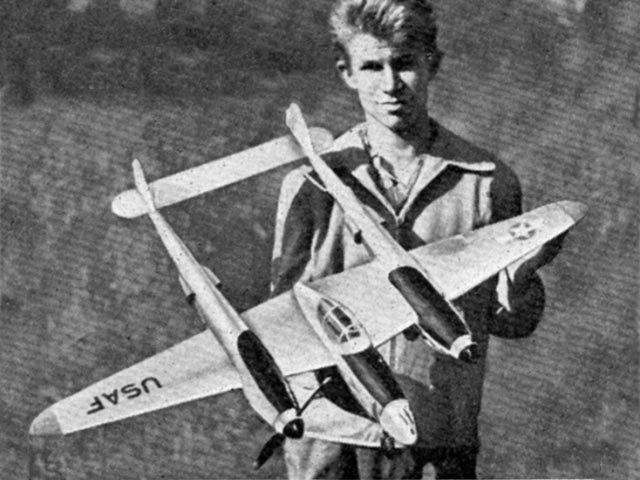 Hi Steve and Mary. Find attached a few photos of my B.A. Troberg P-38s [more pics 003-005]. I am glad that you like old photos, as the B&W one was my first attempt in 1968 (London, U.K.), powered by 2 x 2.5cc Yin Yan (Silver Swallow) diesel engines. It flew quite well. I was still a teenager back then. After moving to Western Australia I built another P-38 a few years later, this time powered with a pair of Enya .19s. Wow, did that one hammer around the circle, even on one engine it was solid as a rock! I used to fly it at 'The Causeway', a smooth grassy area next to the Swan river in Perth W.A. One nice memory is that it attracted people, some of whom took up aeromodelling and who I still see at competitions today. One well known Australian aeromodeller came up to me at a Nats a few years ago and introduced me to his friends and family as "This is the bloke who taught me how to fly". Very humbling but also rewarding.
DannyMZ - 17/04/2018
Add a comment