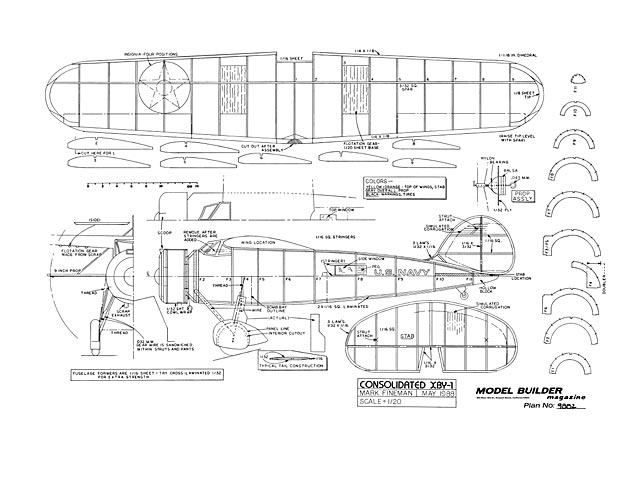 Consolidated XBY-1. Scale rubber model, printed as a scaled-down 13 in peanut size model. Scaled up as dimensioned, it is a jumbo scale model at 27in span.

Quote: "CONSOLIDATED XBY-1. An Experimental Navy Bomber. By Mark Fineman. This Vega lookalike is the military version of the Consolidated Fleetster. You can build it from fullsize plans, available through our plan service, or turn the page and build a peanut version.

In answer to everybody's first question: no, this is not a navalized version of the Lockheed Vega! The resemblance between the Lockheed and Consolidated products is striking to be sure. And the Consolidated Fleetster (the progenitor of the XBY-1) was a contemporary of the much more successful Lockheed ship. The Fleetster, like the Vega, was intended to be a single-engine commercial aircraft, but for reasons about which one can only speculate, the Fleetster never equalled its Burbank contemporary.

The Fleetster was actually produced in two versions, a high-wing cabin job (the Vega look-alike) and a parasol wing version with the pilot situated aft of the wing. The Fleetsters, incidentally, used an all-metal monocoque fuselage, unlike the all wood Vegas. Only about two dozen Fleetsters of all types were ever built.

The depression economy provided lithe market for the Fieetster, a fact that was not helped by Reuben Fleet's own indifference to the big transport, even though it was named in his honor! In an effort to breathe new life into the project, Consolidated engineers reconfigured the Fleetster into a military aircraft, resulting in the XBY-1, a handsome, monoplane Navy bomber in an era when the Navy was hopelessly smitten with biplanes. Besides being an all-metal monoplane, the XBY-1 had an internal bomb bay, a flush-fitting dorsal gunner's hatch, and beautifully panted fixed landing gear. The XBY-1 was intended for carrier work, being equipped as it was with a tail wheel and retractable arresting hook.

With a fixed span of 45 feet, the big ship might have been quite a job to handle within the confines of a hangar deck, but the XBY-1 was scratched by the Navy before she ever saw the deck of an aircraft carrier. This innovative bomber was believed to have lived out her remaining years as a hulk in a mechanics' training school.

As a subject for a scale model, the XBY-1 is all but perfect. It has good moments and areas coupled with the usual stability of a high-wing cabin job. There are just enough details to make the project interesting, but not enough to cause frustration. The entire model, except for a slightly enlarged stabilizer, was built It 1/20 scale in honor of my Czech model building friends, who design all of their scale models to that criterion.

CONSTRUCTION: Construction tips: most of the major sheet structures (wing ribs, fuselage formers, etc) are cut from 1/16 sheet. It is recommended that you take the extra time to cut the fuselage formers from 1/16 sheet made up from cross-laminated sheets of 1/32 balsa. This will add a great deal of strength to the finished model with a negligible weight penalty. Tail out are also laminated from strips of 1/32 sheet softened in hot water and household ammonia, cemented around a cardboard form with diluted white glue. In much the same manner, the upper and lower fuselage keels are laminated from soaked 1/16 square stringers

Wing: Construction is quite conventional. Note that the wing tip is raised to meet the main spar, which is a practice that adds some aerodynamic stability, much like tip washout, and simplifies covering. I added a thin strip of carbon fiber tape to the lower surface of the mafri spar for added strength, but this step is entirely optional..."

Quote: "As a subject for a scale model, the XBY-1 is all but perfect. It has good moments and areas coupled with the usual stability of a high-wing cabin job. There are just enough details to make the project interesting, but not enough to cause frustration. The entire model, except for a slightly enlarged stabilizer, was built to 1/20 scale in honor of my Czech model building friends, who design all of their scale models to that criterion." 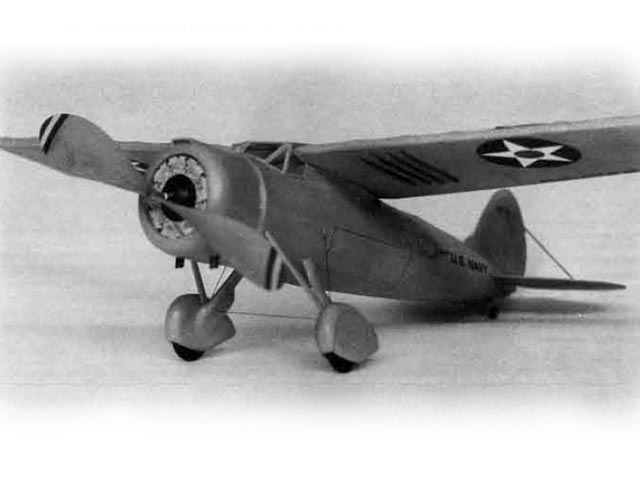